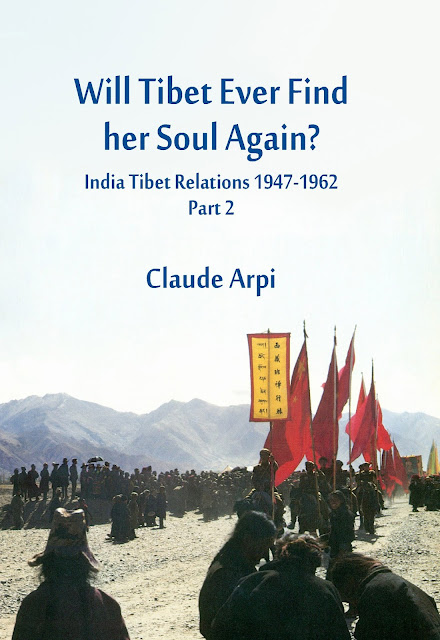 My book Will Tibet Ever Find Her Soul Again? has been reviewed by Thubten Samphel for The
Hindustan Times

The brilliance of new China’s leaders in pursuing their hard-nosed strategic objectives in Tibet was to weave a plausible narrative of ‘liberation’ around what was an outright invasion of the country. The other twist in the narrative was to force Lhasa to sign the 17-Point Agreement in 1951 in which Tibet promised to “return voluntarily to the lap of the motherland.” Half the world, largely the socialist camp, bought China’s story on Tibet.
The process of dealing with China’s fait accompli on the Roof of the World was particularly painful in the corridors of power in New Delhi. Should close cultural, commercial bonds and an open, unguarded border between India and Tibet blindside New Delhi to the changed new geopolitical reality in which the balance of power between independent India and new China had shifted in Beijing’s favour?
In dealing with the issue of Tibet, the two Asian giants brought two different mindsets. India had hoped, as articulated by Nehru, de-colonizing Asia and Africa would come together as one big family to work for common prosperity and peace. China on the other hand was there for itself, in whatever form that enduring Chinese imperial impulse was dressed up in the reigning ideology of the day.
The clash of views of men on the ground who figured out China’s true intentions in Tibet and beyond and those who took Beijing’s comforting words at their face value are put together in Will Tibet Ever Find Her Soul Again? The value of Claude Arpi’s contribution to scholarship on the subject is that it is based on the Nehru papers housed in the Nehru Memorial Library and Museum and the National Archives of India. “It is the first time such documents have been used (or even seen),” says Arpi.
At the time these events unfolded in Tibet, New Delhi’s man in Lhasa was Sumul Sinha. In his briefing to New Delhi about Chinese intentions, he wrote: “It seems to me that we are not facing fairly and squarely the realities of the situation here, inclined as we are to gloss over Chinese dislike and distrust for insignificant aliens like us, for no better reason than to keep Delhi in good humour and to keep alive the illusions of our policy-makers who still believe that much maligned Chinese are just as good today as they were in the past.”
In his briefing note to Major SM Krishnatry, the Indian Trade Agent in Gyantse, Sinha was brutally honest. He accused the People’s Liberation Army of doing a Robert Clive act on Tibet. “I hardly think that Chinese officials in Tibet can help being adventurous nor do I blame them for dreaming of conquest far beyond the confines of Tibet. They are physically placed at the outskirt of an empire and has happened in so much of history, think and behave like modern Clives and Hastings, always anxious to out-do their own achievements.”
The critique to this assessment came from Nehru himself. In 1953, India’s first prime minister wrote that Sinha “looks with certain nostalgia to the past when the British exercised a good deal of control over Tibet and he would like India to take the place of the British of those days. As a matter of fact, the weakness of our position in Tibet has been that we are successors, to some extent, of an imperial power which has pushed its way into Tibet. When that imperial power has ceased to have any strength to function in the old way, it is patent that we cannot do so, even if we so wished.”
In this Great Game played out between independent India and re-united China, Arpi’s ability to piece together all the confidential memos and exchange of notes in high places serve as a fly on the wall. His contribution on the subject will serve as a guide for new players not to repeat the mistakes of the past. With China rolling out the almost globe-girdling Belt and Road Initiative to improve sea and land connectivity to purportedly facilitate international trade but also to assert its political influence on the countries strung along the new Silk Road, the Great Game is being played with new vigour. Arpi’s contribution constitutes a playbook for the participants in the new Great Game, now re-branded and re-sold as the Belt and Road Initiative.
Posted by Claude Arpi at 7:29 AM