The Hidden Kingdom of Pemako ...hidden no more

Recently, several ‘official’ Chinese websites published a photo-feature on Metok county, North of Upper Siang district of Arunachal Pradesh.
While Delhi still lives with its century-old ‘Inner Line Permit’, China is fast developing its borders (with India) by building a modern infrastructure and wooing the local tribes, providing them hefty revenues. These Chinese websites carry the same text on each of the 20 or so photos depicting  “Medog [Chinese name for Metok] County of Nyingchi City of southwest China's Tibet Autonomous Region. [TAR]” 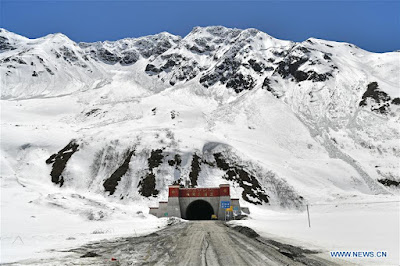 It is explained that ‘Metok’ means ‘Secret Lotus’ in Tibetan language (in fact it simply means ‘flower’), is located in Nyingchi (Tibetan ‘Nyingtri’): “on the lower reaches of the Yarlung Zangbo [Yarlung Tsangpo or Siang in Arunachal Pradesh and Brahmaputra in Assam] River and the south of the Himalayas.”
Metok County is thus described: “[it] boasts of amazing natural landscapes due to its unique geographical position. Before the traffic opened [in 2013], people could not arrive in Medog except for walking. Getting in and out of Medog was a dangerous journey. Frequent natural disasters such as avalanches, landslides, and mudslides blocked visitors from the outside world. The construction of roads to Medog is a tough task because of the complicated geological conditions and disastrous weather.”

The Opening of the Tunnel
The great change occurred in 2013: “With several attempts thwarted in the last decades, a 117-kilometer highway connecting Medog with neighboring Bomi County finally opened on October 31, 2013.” 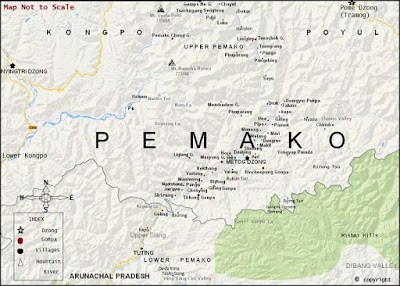 The opening of the tunnel was a game changer for the remote area …and for India’s security.
View from the Chinese point of view, “the completion of the Medog highway not only promoted the communication between Medog and the outside world, but also benefited the poverty relief of border ethnic minorities. Crude stilted houses have been replaced with modern houses consisting of complete facilities. Commodity prices have been lowered to a level similar with the outside world. The local economy especially tourism develops fast in recent years, unfolding to the world a new Medog with its mysterious beauty.”
Not a word about the ‘dual’ use of the infrastructure by the civilian and military administration; there is no doubt that it is a boon for the People’s Liberation Army (PLA) which for the past six years has a far easier access to the Indian border in this sector.
The photos show the development of what was a tiny village a few years ago; it is flabbergasting (see below).

Pressure on the local populations
While developing areas like Metok, the Chinese government tries to woo the local tribes, which have many similarities with the Indian ones, south of the McMahon line.
The propaganda has been going on full swing; Kangba TV reported that “Lhobas of Tibet find new ways of living.”
According to Wikipedia, 'Lhobas' are an amalgamation of Sino-Tibetan-speaking tribes living in and around Pemako, a region in southeastern Tibet including Mainling, Metok and Zayül Counties of Nyingchi City/prefecture and Lhünze County of Lhoka Prefecture.
The Chinese government officially recognizes the Lhobas as one of China's 56 ethnic minorities.
Linguistically and culturally, it is not a homogeneous group. The two main tribal groups falling under the designation ‘Lhoba’ designation are the Mishmi, who speak the Idu Mishmi language and tribes who speak the Bokar dialect (Abo Tani). These tribes are found on both side of the border though in greater numbers in Arunachal Pradesh.
The Tagins of Subansiri district of Arunachal are also identified by Chinese authorities as ‘Lhoba’.
Incidentally, out of the 20 delegates from the TAR to the National People’s Congress, three are from the border areas (with Arunachal):

The Lhoba tribe
To come back to the TV Channel, it explains: “The Lhoba people, an ethnic minority group in the Tibet Autonomous Region took less than 40 years to modernize from their primitive hunting lives deep in the mountains.”
As mentioned in a previous posting, the policy of the Government in Beijing (and in Lhasa) has been to sedentarize the population, Kangba TV said: “Since 1984, when they moved down from the mountains with the help of the local government, they began to settle down in villages, earn regular wages and learn farming from their Tibetan counterparts. Now the Lhoba population in three villages in Manling county, Nyingchi City, have prospered greatly from the tourism industry.”
Since the Fifth Tibet Work Forum in 2010, Beijing has decided to play the ‘tourist card’ to bring some well-being and prosperity to the border areas ...and the infrastructure required by the PLA.
Among other things, it brought ‘modern’ facilities such as TV broadcasts: “In 1983, China created its first supercomputer, named Galaxy, and the country began seeing broadcasts of the Chinese New Year celebration gala on television.”
The article then quotes one Daniang, who, as 7-year-old “was busy hunting prey every day in the forest, carrying arrows and a bow on his back. His tribe was isolated from the outside world. They moved from place to place, following their prey, such as leopards, bears and boars, and lived in temporary wooden shelters. They ate the meat and sometimes traded the hides with local Tibetans for salt. They wore animal skins and rarely had enough food to fill their stomachs.”
In other words, China brought the ‘civilization’ …through the relocation: “In 1984, Daniang's tribe was discovered by the local government and relocated to a village. The government provided land and houses, and the local agriculture and animal husbandry bureau sent experts to teach them how to grow crops, including highland barley and wheat.”

A New Source of Income
According to the Chinese website: “In 2008, three villages with relatively high Lhoba populations in Mainling county began to develop tourism with the support of the local government, bringing them a new source of income.”
But it is only in 2010 that it became an official policy: “The beautiful mountain scenery, the exotic customs of the Lhoba ethnic group and their history of hunting life soon attracted many tourists from around the country.”
Dawa, the Party Secretary of the Mainling township, observed that the villages received 200,000 tourists from March to October last year: “they spent more than 2 million yuan. Each village household received a dividend of 15,000 yuan”.
Obviously the figures quoted are wrong; it would mean an expenditure of 10 yuans per tourist, but there is no doubt that the villagers run homestays, hotels, restaurants and food stalls, at least during the peak season: “Many of them have learned Mandarin for daily communication," said Dawa.
Tourism helps protect Lhoba culture according to the Party official: “many forms of intangible cultural heritage, such as bamboo weaving and fabric weaving were used in handicrafts. Traditional performances such at singing and dancing with long knives were preserved.”
The website admits that China has only 3,000 Lhoba people living in Tibet.
The Lhoba people who have their own language, though no written script, are struggling to preserve their heritage, said Daniang who added that the local government employs Lhoba teachers to revive the language.
He however admitted that the materials for their traditional costumes, including the shells and the turquoises …were provided by the government.
For the show?
With one stone, Beijing kills two birds, the ‘Lhoba’ culture is promoted, showing to the tribes living south of the McMahon Line, that China is looking after its ‘minorities’ and perhaps more importantly, the border is ‘stabilized’, with a ‘dual’ infrastructure developed.
In case of a conflict with India, China will be ready to bring (and accommodate) tens of thousands troops on India’s borders.
Thanks to tourism with Chinese characteristics…
Should not India wake up?

Here are some pictures of Metok... 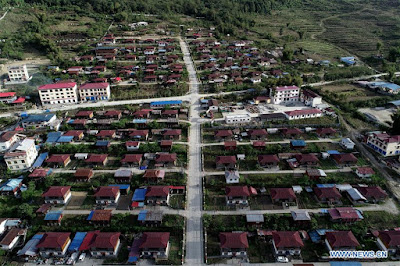 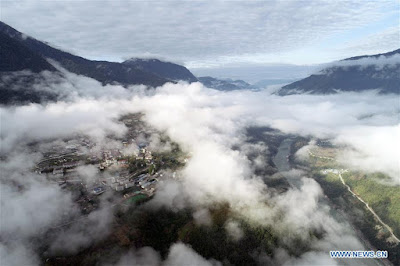 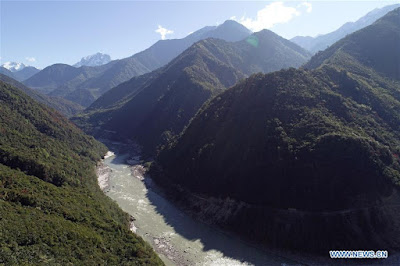 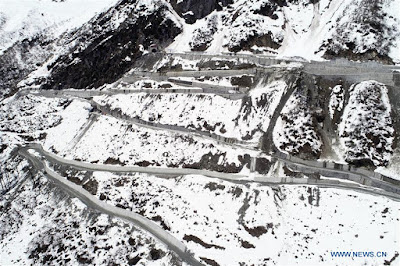 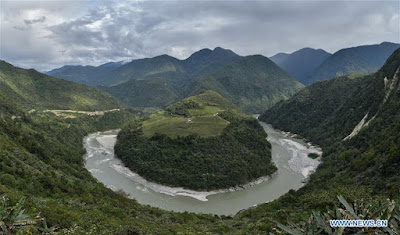 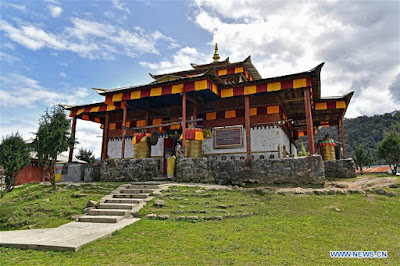 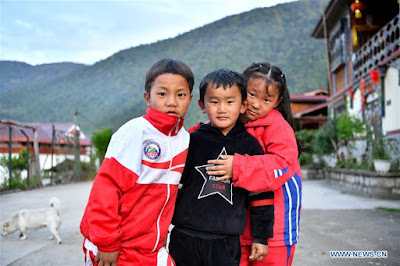 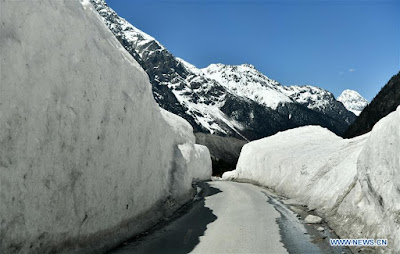 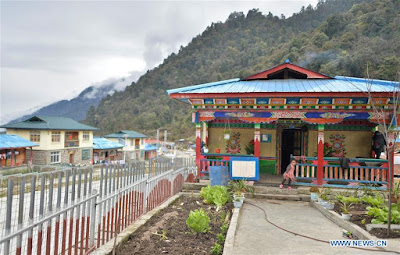 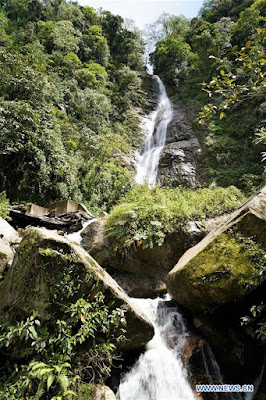 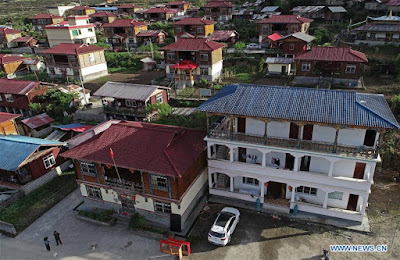