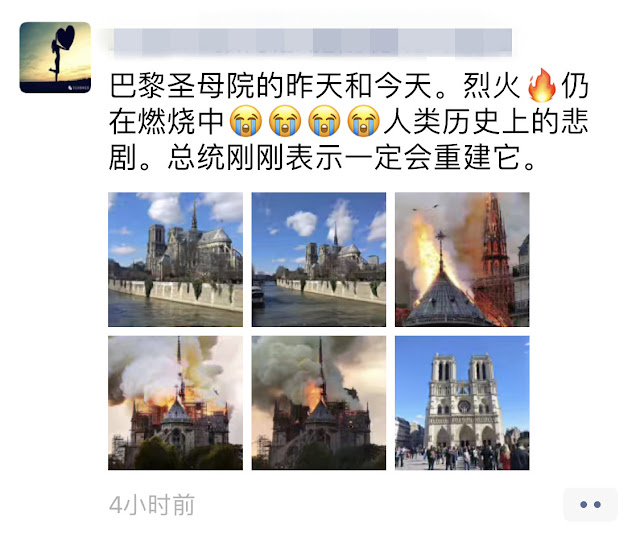 The tragedy which took place in Paris two days ago, when Notre Dame de Paris, the emblematic Cathedral in the heart of the French Capital, was engulfed in a fire, has created a lot of emotions all over the world, including in China.
All those who visited the Cathedral understand why?
Notre Dame was/is the symbol of the genius of the country.
The Chinese bloggers have been very active to express their deep sorrow.
One published picture said: "Notre Dame de Paris Cathedral  yesterday and today. The fire is still raging. A tragedy for the history of humanity, The French President has jst announced that it will be rebuilt."
Thousands of such messages could be read on the Chinese Internet.
It is good. It is touching.
But I wonder why  the Chinese press ...and the World Press, practically kept rather quiet when the same tragedy befell on Jokhang Cathedral in Central Lhasa, (which was built several centuries before Notre Dame). The information was announced and dropped immediately.
I wonder why there is always double standards when it comes to Tibet.
It is sad...
I  repost an article that I had written last year on the fire in Jokhang...


February 2018 article
Last night, Xinhua reported that "a fire broke out at 6:40 pm in part of Jokhang Temple in Lhasa."
According to the official Tibet Daily, the fire was eventually put off in the evening,
The News Agency said: "Located at the center of old Lhasa, Jokhang Temple is a renowned temple for Tibetan Buddhism. It has a history of more than 1,300 years and houses many cultural treasures, including a life-sized statue of Sakyamuni when he was 12 years old."
This inauspiciously occurred on the second day of the Losar, the Tibetan New Year (Earth Dog Year). 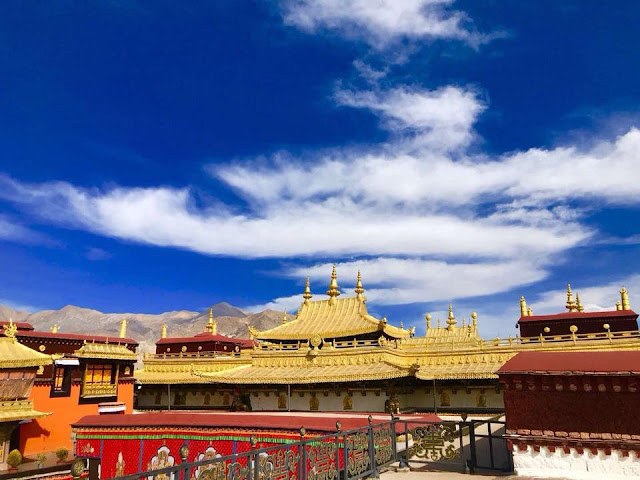 The Statue of Jowo Rinpoche
The Jokhang temple, the Central Cathedral in the Tibetan capital, houses Jowo Shakyamuni or Jowo Rinpoche, the most sacred statue in Tibet.
The Jowo Rinpoche statue is said to have been personally blessed by the Buddha.
It came to be owned by the king of Magadha, who gave it to a Tang emperor of China.
One of the emperor's clansman's daughter, Princess Wenchen Kongjo took it to Lhasa in a wooden cart when she married the Great King of Tibet, Songtsen Gampo.
During King Mangsong Mangtsen's reign (649-676), due to a threat that the Tang Chinese might invade, Princess Wencheng is said to have hidden the statue of Jowo Rinpoche in a secret chamber in the Jokhang.
Another Chinese Princess Jincheng, sometime after 710 CE, placed in the central chapel.
The statue was badly damaged by the Red Guards during the Cultural Revolution.

Signs sent by the Gods 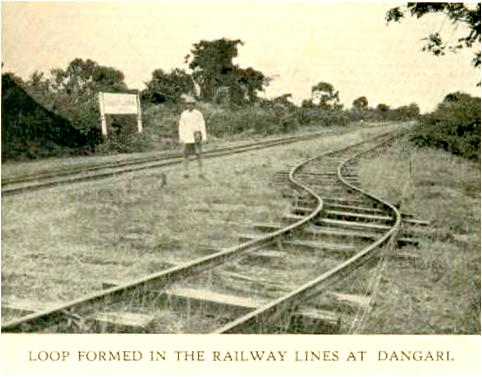 The Tibetans believe that the Gods are from time to time sending signs to the humans.
It can be forewarning messages for the bad (and good) times to come.
I post here extracts of my book The Fate of Tibet.
It was August 15, 1950 (coincidentally (?) India's Independence Day).
The signs were strong.
On that day, the Gods spoke.
Three months later, Tibet was invaded by the 'Liberation Army' of China.
The epicentre of the earthquake was also symbolic; it occurred in Rima, north of the McMahon Line (Kibithu/Walong sector), which saw heavy fighting in October/November 1962.
It was one of the most powerful earthquakes of the 20th century (8.6 on the Richter scale).
In India, it became known as the 'Assam Earthquake' due to the extensive damages in the State.
The course of the rivers changed in several places.

Here are the extracts of The Fate of Tibet:

The Dalai Lama who was 15-year old, was in Lhasa, a few hundred kilometers away.
He later wrote about the ominous earthquake which shook Tibet on August 15, 1950


It was like an artillery barrage – which is what we assumed to be the cause of both the tremors and the noise: a test of some sorts being carried out by the Tibetan army…Some people reported seeing a strange red glow in the skies in the direction from which the noise came….

For centuries, Tibet had remained isolated. The nation’s energies and time was consecrated to achieve spiritual goals, her defence was neglected and until the beginning of the twentieth century, nobody (except the Thirteenth Dalai Lama) had too much been bothered by the international happenings.
Formal recognition or boundary delimitation [with India] had been in a way forced on the Tibetans by Younghusband’s invasion and later by Sir Henry McMahon at the Simla Convention.
At the end of the forties, Tibet had begun to wake up at the sight of the black clouds gathering around the Land of Snow: the atheist 'east wind' was threatening to blow over the sacred Shangri-La.
The first signs that mythical Tibet was soon to forever disappear were appearing.
The 'Rima' earthquake was the most striking one.


...In the evening of August 15, a terrible earthquake shook Tibet. "This was no ordinary earthquake; it felt like the end of the world,


For hours afterwards, the sky over the south-eastern Tibet glowed with an infernal red light, diffused with the pungent scent of sulphur.

For the Tibetans, it was one more bad omen, following some recent prophecies of the State Oracle and the appearance of a bright horse-tailed comet similar to the one viewed before the Chinese invasion of 1910.

The time has come
Suddenly in Tibet, everyone understood that the time had come.
The Last Testament of the Thirteen  Dalai Lama [‘And Long and Dark Shall be the Night’] came back at the mind of all, but it was too late, the dies had been thrown long ago.
Now, Tibet would have to go through the ordeal and the only hope for the Tibetans was it would not be too painful and long.
In the meantime, the Indian Government was torn between two sentiments: on one side Tibet was a small (though large by size) independent nation with very rich and old cultural and religious bonds with India and on the other side Nehru and some of his colleagues had an immense admiration for the new People's Republic who like India, had to struggle against colonial powers to gain her freedom. For many in Delhi, China and India were the symbol of a ‘New Asia’ and the newly-found ‘eternal friendship’ with China was of supreme importance.
This one-way friendship was to be the fountainhead of Nehru’s Tibet policy till the fateful day of October 1962 when the troops of Marshal Lin Biao crossed the McMahon Line over the Tagla Ridge. That day Nehru knew that the so-called friendship was a one way traffic, but he was too late and he never physically and psychologically recovered.
As we will see in the debate in the Lok Sabha in December 1950, a few Indian political leaders understood about the security of the Indian borders and the defence implications of the ‘resurgence’ of the Chinese empire.
Among them, one man stands as a giant: Sardar Patel.
But fate took him away from the political scene at this most crucial time of Indian history.
Posted by Claude Arpi at 5:40 AM