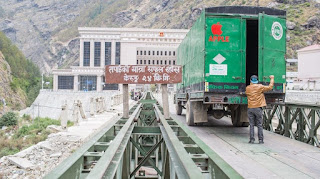 My article Chinamania in Nepal appeared in Mail Today

News in the social media recently said that some Tibetan Buddhists in Nepal protested “against utterly ridiculous demand from Nepali's China sycophant politicians to ban the use of the khata, the traditional Tibetan white scarf, because it is hurting the feelings of the Chinese people.”


New-found Love
Whether true or not, the mantra, ‘hurting the feelings of the Chinese people’ is nowadays prevalent all over the world, but many Nepali politicians are at the vanguard of the movement. Have they seen the picture of President Xi Jinping, offering a khata to the stupa of the previous Panchen Lamas Shigatse during a visit to Tibet in September 2011? Probably not, but sycophancy and a search for facts do not often go together.
This is nevertheless symptomatic of the Chinamania which has seized the former Himalayan kingdom.
While some of the news coming from Kathmandu are comical, others have strategic implications for India.
Take for example, the fact that Nepal has chosen a railway-track gauge used by China, as standard for its network; Kathmandu justifies the choice by the lower Chinese costs. The move is a serious setback for Delhi which has failed to limit Beijing’s control over Nepal.
According to Reuters, last year India proposed to lay a broad-gauge (1,676 mm) rail link from Raxaul, the Indo-Nepal border to Kathmandu; but with China working hard to extend its own railways from Shigatse to the Kyirong land post and then to the Nepali capital, Nepal decided to use the 1,435 mm Chinese standard gauge.
Minister for Physical Infrastructure and Transport Raghubir Mahaseth told Reuters that his government will ask India to use the Chinese gauge: “Standard gauge is less expensive,” was the rationale.
Also worrying for India is the fact that the planned extension of the same railway will go to Lumbini, the birthplace of Buddha, near the Indian border; a way to annex Buddhism.
Today, China is everywhere in Nepal. Most of the areas of the Nepali capital and Pokhara have become China towns.
Plans for developing China's ‘Belt and Road Initiative’ (BRI) infrastructure are progressing full swing. During the 19th century, Nepal exported rice, flour and ghee to Tibet while importing wool and salt; but today, trucks go empty to Kyirong (Jilong for the Chinese) and bring loads of industrial and consumer goods from China. One way-traffic seems to be the BRI norm.
Infrastructure projects are mushrooming, particularly at Rasuwagadhi-Kyirong port (the Tatopani-Zhangmu landport has been more or less abandoned after the earthquake of 2015)
For the Japanese newspaper The Nikkei, “the price is paid in diplomatic support for Beijing: The Nepalese consulate in Lhasa, the only foreign diplomatic mission in the Tibetan capital, recently reiterated unwavering support for Beijing's claims to both Tibet and Taiwan.”
Incidentally, India had a full-fledged mission in Lhasa till 1952 and a Consul-General till 1962; today, Beijing adamantly refuses to reopen it, wanting India to go through Nepal authorities for transborder trade.

The Tibet Pacifier
It is clear to any outside observer that ideologically too, Nepal has to compensate for Chinese largesse by following the line of the Communist Party’s propaganda. Beijing tries to fool the world by publishing a White Paper entitled ‘Democratic Reform in Tibet – Sixty Years On’ and change the historical reality which saw Mao’s troops massacring thousands of ordinary people in March 1959 in order to force the so-called reforms down the Tibetan throats.
But Kathmandu is today ready to follow any Chinese words; an exhibition “Past and Present: Photo Exhibition for the 60th Anniversary of Tibet’s Democratic Reform” was held on March 28 at Nepal College to mark the Serfs’ Emancipation Day; on that day, the Dalai Lama’s government was dissolved and replaced by a set of hard core People’s Liberation Army’s generals.
The 160-photos exhibition was hosted by the Chinese Embassy in Nepal (Beijing has recently posted a very pretty lady diplomat as ambassador, making it more difficult for the Nepalis to resist Chinese ‘offers’) and the China Association for Preservation & Development of Tibetan Culture.
A Chinese communiqué said that people “from all walks of life in Nepal, Tibetans living in Nepal, and representatives of Chinese institutions came and viewed the exhibition.”

The Chinese Stupa
Krishna Bahadur Mahara, Nepal’s Speaker of the House of Representatives, asserted that the exhibition “was rich in content and that they could understand the development of Tibet’s political, economic, cultural, and religious fields from it.” He stated: “Nepal is willing to strengthen cooperation and exchange with various provinces, municipalities, and autonomous regions in China, including the TAR, under the framework of the BRI.”
India seems to have lost a neutral neighbour, master of its own affairs.
Even the borders of Nepal are looked after by Beijing. According to The Kathmandu Post, Kathmandu has permitted the China International Development Cooperation Agency (CIDCA) to provide development assistance in 15 northern districts of Nepal “to meet their developmental needs”; these districts share a common border with Tibet. The agency was setup in August 2018 in order to strengthen “the strategic planning and overall coordination of the Chinese aid to Nepal.”
One unsaid objective is to stop Tibetans fleeing their native land and taking refuge in India. It has been remarkably efficient.
On March 30, a CIDCA team visited Kathmandu and held talks with Prime Minister KP Sharma Oli; a proposal was made to further support Nepal’s border districts.
A small telling example of the prevalent Chinamania; in the 1970s, a Shanti Stupa was built by Nichidatsu Fujii, a Buddhist monk from Japan and founder of the Nipponzan-Myōhōji Buddhist sect; it was to be a symbol of peace on the top of the Anadu Hill, near the tourist town of Pokhara. Now the locals call the monument ‘the Chinese Stupa’, probably to please the Mainland tourists flocking the place.
One can only hope that it is a temporary phase.
Posted by Claude Arpi at 5:58 AM