The Mystery of the Dalai Lama's Plane Solved? 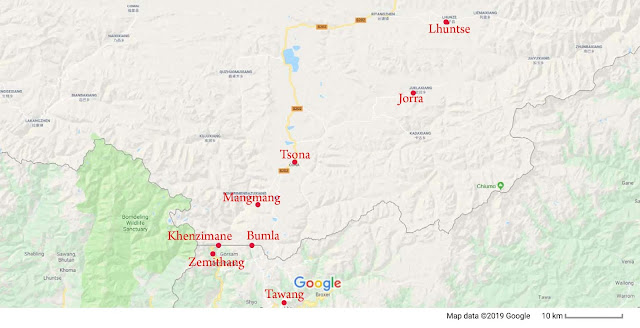 The content of my interview with Wing Commander Jaggi Nath has serious collaterals as far the history of the relations between India, Tibet and China is concerned.
Among other things, the twice-awarded Maha Vir Chakra said: “If we had sent a few airplanes (into Tibet), we could have wiped the Chinese out. …And everything could have been different in the 1962 War. …They did not believe me there was no Chinese air force. …Can you imagine what would have happened if we had used the IAF at that time? The Chinese would have never dared do anything down the line.”

A Telling Incident
Take a small incident, which occurred as the Dalai Lama was trekking in direction of the Indian border to take refuge in the Land of the Buddha.
It was on March 29, 1959.
The Tibetan leader recalled in his memoirs, Freedom in Exile: “From Lhuntse Dzong we passed to the small village of Jhora [or Jorra] and from there to the Karpo pass, the last before the border. Just as we were nearing the highest point of the track we received a bad shock. Out of nowhere, an aeroplane appeared and flew directly overhead. It passed quickly - too quickly for anyone to be able to see what markings it had - but not so fast that the people on board could have missed spotting us. This was not a good sign. If it was Chinese, as it probably was, there was a good chance that they now knew where we were. With this information they could return to attack us from the air, against which we had no protection. Whatever the identity of the aircraft, it was a forceful reminder that I was not safe anywhere in Tibet. Any misgivings I had about going into exile vanished with this realisation: India was our only hope.”
I have detailed elsewhere on this blog, the Dalai Lama's arrival at Khenzimane/Chuthangmu and his reception by the Assistant Political Officer (TS Murthy) in Tawang and a detachment of the Assam Rifles.
The Dalai Lama continued: “A little later, the men I had sent on from Lhuntse Dzong returned with the news that the Indian Government had signalled its willingness to receive me. I was very relieved to hear this, as I had not wanted to set foot in India without permission."

No Chinese Planes in Southern Tibet
Today, it is clear that there was no PLA Air Force worth its name and the Chinese planes did not have the capacity to fly over Southern Tibet, one can only deduct that the plane seen by the Dalai Lama and his party was a Canberra of the 106 Squadron.
It was probably Air Marshal (then Wing Commander) Randhir Singh, the Commanding Officer (CO) of 106 who flew over the Dalai Lama, whose party was on wireless communication (provided by the CIA?) with Lhasa and Delhi.
In his report to the Political Officer in Gangtok and the Ministry of External Affairs in Delhi, Maj SL Chhiber wrote: “His Holiness the Dalai Lama, smelling danger, left Lhasa secretly on the night of the 17th March, 1959, with important members of his personal staff, three Cabinet Ministers and members of his family for Lhoka area (south of Lhasa), where at that time Khampas had full sway and from where it was easier for him to escape to India if need arose.”

More details on the uprising and the flight
In the same report, we get more details of the flight of the Dalai Lama: “By 17th March all the strategic places between Norbulingka and Chakpuri/Potala were occupied either by Tibetan soldiers or volunteers. Since our area happens to be in between Norbulingka and Chakpuri number of volunteers and soldiers could be seen with arms and ammunitions at nearby places. Some of them for their convenience used to cross through our area though we tried various methods to stop them.”
The account continues: “A rumour was afloat on 17th March that the Chinese had fired three mortor shells from their motor station in Chandannagar which is on north-east of Norbulingka towards latter. Between the 11th March and the evening of the 19th March the Tibetan troops sounded alarms number of accidentally by the in-experienced volunteers or fired to test their weapons or tried their skill on target shooting.”
Now, the crucial piece of information which contradicts what the Prime Minister said in Parliament on March 23: “On 18th morning we came to know that the Dalai Lama had left Norbulingka on the previous night and was proceeding towards Lhoka area. We also noticed that number of Tibetan troops had considerably reduced and their places taken up by volunteers. Now it looked that fighting would start any time. What actually made the Dalai Lama leave suddenly can only be told by him or his advisers but we feel that his advisers probably came to know of some plans of the Chinese that put fear in them and made them leave. The plan might have been about the whole sale arrest by the Chinese of all the Tibetan officials and others taking part in the movement. We don’t think that the departure was decided on the 17th March only. The Dalai Lama might not have thought of it but his advisers must have planned it immediately after the trouble started on the 10th March, 1959.”

Thereafter, India was in constant wireless connection with the Tibetan leader's party.
The Air Headquarter must have decided a sortie of a Canberra to check the exact position of the party and which route the Dalai Lama would take to reach the border.
Let us not forget that the Dalai Lama had already written to the Indian Prime Minister two/three days earlier to seek refuge in India: “Ever since Tibet went under the control of Red China and the Tibetan Government lost its powers in 1951, I, my Government officers and citizens have been trying to maintain peace in Tibet but the Chinese Government has been gradually subduing the Tibetan Government.”
The Dalai Lama had added: “In this critical situation we are entering India via Tsona. I hope that you will please make necessary arrangements for us in the Indian territory. Confident of your kindness…”
There were different routes from Tsona, the last town north of the border (Bumla border pass for example).
Squadron 106 was probably asked to check.
As the 106 sorties were Top Secret and no log book of the flights were kept (and Air Marshal Randhir Singh recently passed away), we shall probably never have more detail.
But there is no doubt in my mind that it was an Indian Air Force plane, a Canberra who flew over the Dalai Lama's party, when they were on their way to India.
For Hollywood, a Chinese plane would have certainly been more exiting.
Too bad for the US film industry.
Posted by Claude Arpi at 8:23 AM

The granting of asylum to the Dalai Lama was covertly cleared by Nehru before the escape from Norbulingka, according to Deb Shankar Seal who was the lndian radio operator at Lhasa.The escape party was equipped with a low-powered transciever built by Seal, a veteran ham who operated the only licensed ham radio in Tibet.The waypoints of the escape route were given codenames and the escape party transmitted brief signals to Lhasa from where the Consulate radio kept Delhi briefed on progress. If you want to know more about the amazing ham operator Seal you can refer to my illustrated article on him in a Sunday edition of The Telegraph, Calcutta sometime around 1983-84.