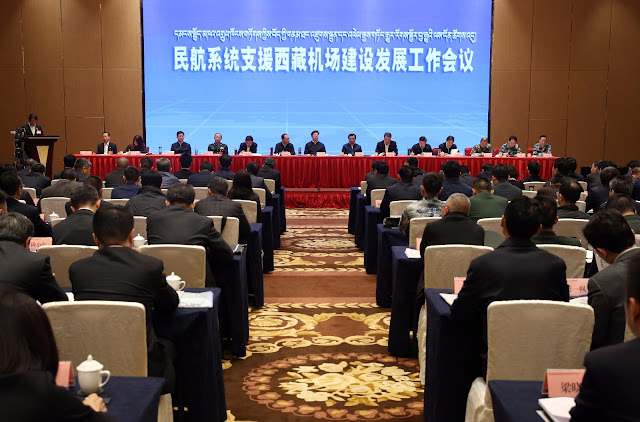 On June 9, the Civil Aviation Administration of China and the Tibetan Autonomous Region’s (TAR) government announced that Tibet will soon have three new airports. A communiqué said: “Construction of the three airports, all above the altitude of 3,900 meters, should begin in 2019.”
Xinhua gave the rationale: “Tourist travel will be more convenient, and economic development in Tibet's agricultural and pastoral areas will also be assisted.”
The announcement came during Conference Civil Aviation System Supporting Tibet Airport Construction Development held in Lhasa on June 8.
The entire project is called '3+1' because the Lhasa Gongkar airport will get a second runaway. the scheme comes under Tibet's 13th Five-year Plan (2016-20) with a planned investment of 16.7 billion yuan ($ 2.6 billion).
The Chinese-language press gave more information about the location of the three airports; one will be located in Lhuntse in Lhoka (called Shannan by the Chinese) area, north of the Upper Subansiri and Tawang districts of Arunachal Pradesh, the second will be between Tingri and Lhatse counties of Shigatse City, north of Zangmu, the border post with Nepal, and the last in Purang, near the trijunction Nepal-Tibet-India, north of Pittoragarh district of Uttarakhand (on the yatris’ route to Mt Kailash).
While Tingri airport is near the Nepali border, the two other (Lhuntse and Purang) are at a short distance from the Indian border.
Xinhua said that Capital Airport Holding Company will be the contractor of the Lhoka, while Shanghai Airport Authority will be responsible for the airport in Shigatse and the West Airport Group will take care of Purang: “The three companies are scheduled to transfer the airports to local operators after one or two years' operation.” The airports should be completed in 2021; by then, there will be eight airports in the TAR (plus three close to the Indian border in Xinjiang, i.e. Kashgar, Hotan and Yarkand).
The news agency added: “At present, the preparatory work for the three airports is underway. The preferred sites have been determined, and the construction of temporary weather stations at each site is completed.”
The three airports will be high altitude airports; they will be operated by companies including Air China, China Eastern Airlines or Sichuan Airlines already involved in Tibet.
Let us not forget an important element; by law, these new airports will be for ‘dual use’; in other words, they will have to be built to suit both the civilian and military standards. The People’s Liberation Army may use them when required.
The Conference was a very-high level affair. Apart from Wu Yingjie, the TAR’s Party secretary, it was attended by Feng Zhenglin, China’s Civil Aviation Administration’s secretary, Che Dalha, the TAR Governor (as well as director of the TAR Border Defense Committee), Ding Yexian, Zhuang Yan, two powerful deputy secretaries, but perhaps more importantly, by Lt Gen Xu Yong, the commander of the Tibet Military District. Three other PLA officers were on the dais (see picture above).
The level of the participants shows the importance of these three new airports for Beijing, particularly after the post-Doklam ‘reset’ of the bilateral relations with India.
India should not fall back into a Hindi-Chini bhai-bhai mood, even if a ‘reset’ of the bilateral relations was necessary, Delhi should realize that Beijing is working hard to be prepared if a new Doklam erupts anywhere on the 4,000km long border.
It is not the time for complacency.
Though as a way to really 'reset' the bilateral relations, Prime Minister Modi should ask President Xi Jinping during their next meeting to open a regular flight  between Dehra Dun and Purang. It will allow thousand of elderly Indians to do the Kailash Yatra. 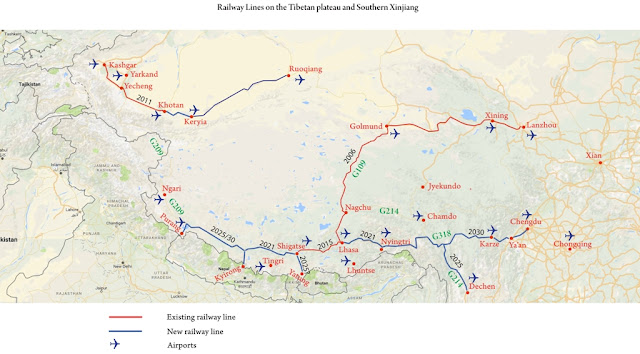