The Return of the Princess? 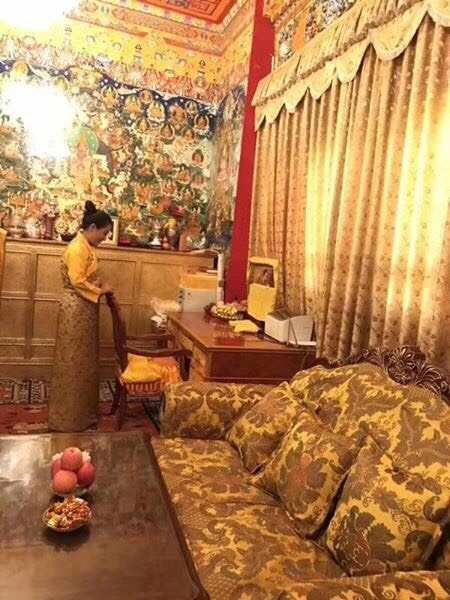 The ‘Princess’, alias Rigzin Wangmo, the 10th Panchen Lama’s daughter has returned to Tibet.
Is it a move from the Communist Party to ‘promote’ the memory of her father?
In June 2013, I mentioned her earlier visit to Lhasa (see below).
Five years later, as she arrived at the Jokhang Cathedral, she encountered a huge crowd again; probably much larger than the previous time.
Rigzin Wangmo, accompanied by her mother, received a warm welcome from thousands of Tibetans assembled to have a 'darshan' of the Lama's daughter.
The Tibet Post International (TPI) quoting some sources inside Tibet, wrote: "the 10th Panchen Lama Rinpoche's wife and daughter on June 20, 2013 secretly visited the Jokhang temple in Lhasa, the heart of Tibet, a crowd of thousands of Tibetan people immediately gathered to give them a warm welcome and support."
Not so secretly, if thousands got to know about her visit.
A source in Switzerland told TPI: "Huge gathering of crows paid great attention to their pilgrim(age) to the two holy sites - Jokhang Temple and Ramoche Temple in the capital. Tens of thousands turned out en masse to pay a warm welcome and respects to Rigzin Wangmo, the daughter of His Holiness the 10th Panchen Lama."
Many were disappointed as they could not see the ‘Princess’, due to tight security arrangements hurriedly put in place by the Chinese authorities.
TPI said: “The fear of huge public gathering, a large number of military personals immediately deployed in front of Jokhang Temple and near Ramoche Temple."
Wangmo also visited the Tashilhunpo, her father’s monastery in Shigatse.
There, she was seen with her son, paying homage to the photo of the 10th Panchen Lama and meeting lamas. What is not known is: did her visit have the blessings from Beijing?
Probably.
In which case, it means that the present regime is keen to promote the 10th Panchen Lama, who has often been critical of the Communist policies. Of course a media blank will be put on the Lama's 'patriotic' writings and speeches.
Seen the photos of the 'Princess' in Lhasa, one can imagine what would happen if the Dalai Lama or Samdhong Rinpoche were allowed to visit the Jokhang Cathedral.
But Beijing is too afraid of this; it will never be permitted. 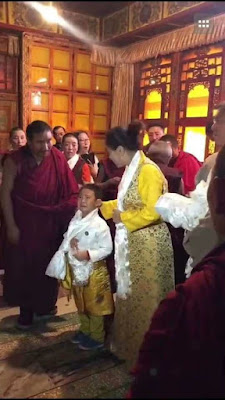 More interesting in my opinion, is the visit to Lhasa, a week earlier, of Rigzin Wangmo, the only daughter of the previous (the 10th) Panchen Lama.
According to The South China Morning Post, Wangmo, “travelled to Lhasa on her first visit for several years. Thousands of Tibetans greeted her outside Jokhang Palace before being dispersed by police.”
The Communist Party's United Front Work Department had stopped her from entering the region for many years.
In 2006, Rinzin Wangmo, sometimes called Renji, ‘Princess’ gave a long interview to The Southern People Weekly (Nanfang Renwu Zhoukan).
Thought the Propaganda Department of the Chinese Communist Party immediately blacklisted media coverage of Rinzin Wangmo to “avoid disturbing religious figures”, we have an English translation of the interview.
At that time, Wangmo gave several unknown details on her life-story to the Chinese publication: “I came into the world in June 1983. I’m sure a lot of people were surprised at my dad’s marriage and wondered how the Panchen Lama could marry and have a baby. Many people raised in mainland China aren’t familiar with the conventions of Tibetan Buddhism, which belongs to the Mahayana branch. …Having said that, my dad was the first Panchen Lama to marry. Six hundred years passed from the First Panchen Lama to my dad, so for me to be the daughter of the Tenth Panchen Lama makes me feel a deep relationship with the Buddha.”
Her mother Li Jie, was the granddaughter of a Kuomintang general, Dong Qiwu.
‘Renji’ recounted the origin of the ‘70,000 characters petition’, a long missive that the Panchen Lama wrote to Zhou Enlai and the State Council; she said: “This ‘Letter of 70,000 Words’ bluntly enumerated seven key points, which attracted serious notice from top officials in the central government. Although Premiere Zhou Enlai disagreed with some of the views in the letter, he agreed that my dad had raised some valid issues. But a little more than a year later, this ‘Letter of 70,000 Words’ was labeled as reactionary.”
The Panchen Lama was to spend more than 10 years in detention, in most difficult condictions, often been beaten and humiliated by the Red Guards: “The 10 years in prison wore my dad down physically and psychologically, and after his release he craved the comforts of a secular family life.”
She said that at the age of 44, the 10th Panchen Lama was blessed with a daughter; it was her, Rinzin Wangmo.
Now comes an even more interesting part of the interview: “One hundred days after I was born, the party elders Deng Yingchao [wife of Zhou Enlai] and Xi Zhongxun came to my home. Deng gave me my childhood nickname, ‘Tuantuan’ or ‘Circle.’ She picked me up and said, ‘This baby’s face is so round, you should just call her Circle!’The deeper meaning was a wish for an unbroken circle of solidarity and harmony between the Han and Tibetan peoples. In Chinese, the word ‘circle’ carries the meaning of solidarity.”
Xi Zhongxun is President Xi Jinping’s father. One can imagine the bond between the two families.
Wangmo then recalled the tragic (and very mysterious) death of the Panchen Lama in Shigatse: “In the past, we had always just accompanied my dad to the plane when seeing him off. But that time, my dad couldn’t bear to part from us, and had people call me into the plane’s cabin time and time again. He kept telling me things, like that I should study hard so I could assist in his work in the future, and that I must obey my mom. The Living Buddhas [Rinpoche] who were with my dad at the time later recalled that he was very emotional in his regret at leaving us, and that he asked the Living Buddhas to take care of his family as they had taken care of him.”
On January 28, 1989, the Panchen Lama suddenly passed away after having dared to criticize the Party.
Rinzin Wangmo later went to the United States to study. Though the Universities of Virginia and Columbia accepted her as a graduate student, she decided to come back to China, where the Communist Youth League admitted to a Ph.D. program at Tsinghua University.
What is fascinating and timely is the description of her return to Lhasa some ten years ago. She remembered: “The year I turned 18, the government arranged for me to return to Tibet. This was the first time I went back to my native land without my mom. Although communications and transportation are not too advanced, and living conditions are quite basic, news that the daughter of the Panchen Lama had arrived quickly circulated, and every day thousands of people, young and old, sometimes entire villages, came to see me.”
She continued: “All they wanted was to receive my blessing and to present me with a pure white khatag. As I gave them khatags in return, one after another, my arms became so sore that I could barely lift them.
“At the end of my 45-day visit, tens of thousands of Tibetan people gathered in the square of the Jokhang Temple to see me off. With tears in their eyes, they said, ‘Please come back often. We’ll miss you.’ Even as my car drove off, people continued to stand there, waving at me. At that moment, I felt that the responsibility I had taken on was heavier than the soreness in my arms.”
She concluded: “I know the spirit of my dad is blessing me, and that his eyes are watching me...”
The same thing seems to have happened again last week.
Isn’t interesting? Was the hand of some of the official who blessed her when she was born, behind the event?
Everything is possible when the climate start changing.
But it is difficult to know in which direction the wind will blow next political season.
Will it be the same cold Winter Wind or a more refreshing Spring Breeze?
It will probably be decided in Beijing.
Posted by Claude Arpi at 7:19 AM