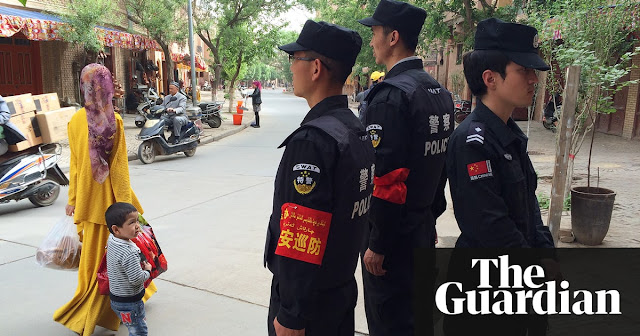 My article Recalling the great China-Russia friendship appeared in the Edit Page of The Pioneer
Openness in China-Russia relations is valuable. The comprehensive strategic partnership suggests that both support each other back-to-back but maintain a positive attitude in developing relations with others, including the West
Information coming from Xinjiang, Western China’s restive Muslim province is rather depressing. Radio Free Asia (RFA) reported that the authorities in Karakaz (also written Qaraqash) in Xinjiang Uyghur Autonomous Region (XUAR) have detained nearly half the population of a village in political re-education camps. Karakax county is located in the southern part of the Tarim basin in the Hotan Prefecture bordering India.
RFA affirmed: “Beginning in April 2017, Uyghurs accused of harbouring ‘strong religious views’ and ‘politically incorrect’ views have been jailed or detained in re-education camps throughout the XUAR,” adding that “members of the ethnic group have long complained of pervasive discrimination, religious repression, and cultural suppression under Chinese rule.”
For the last six decades, Xinjiang has been one of the greatest failures of the Chinese State. How did it start?
New archival material released by the Woodrow Wilson International Center for Scholars in Washington DC, brings light on the annexation of Xinjiang in 1949, which it calls a ‘stunning development’.
Charles Kraus, a scholar at the Center wrote: “Mao Zedong’s eyes had been on Xinjiang for a while. He worried that his rivals, the Nationalist Party, would hang onto Xinjiang and use it as a base for continued operations against the Communist Party of China (CCP). Stalin stoked Mao’s fears, warning that countries antagonistic to the CCP, such as Great Britain, could ‘activate the Muslims’ in Xinjiang in order to ‘continue the civil war’. And of course, taking hold of the oil and other strategic resources present in Xinjiang motivated Mao.”
The Soviets got involved because Stalin probably considered it a win-win solution for Moscow, China would do the ‘dirty work’ of sending lakhs of troops and Moscow would benefit from new trading opportunities with a ‘stable’ Communist province.
One of the newly released documents quotes a meeting which took place on June 27, 1949, in Moscow. Stalin, Molotov, Malenkov, Mikoyan on the Soviet side met Liu Shaoqi, secretary of the CCP’s Central Committee and Gao Gang, the chairman of the Government of Manchuria when the take-over of the Western region was planned: “Comrade Stalin said that one should not put off occupation of Xinjiang, because a delay may lead to the interference by the English in the affairs of Xinjiang.” Stalin argued: “They can activate the Muslims, including the Indian ones, to continue the civil war against the communists, which is undesirable, for there are large deposits of oil and cotton in Xinjiang, which China needs badly.”
One understands better why the Indian Consulate General in Kashgar was closed down by the Communists soon after their arrival in Southern Xinjiang.
During the meeting, the Soviet leader encouraged the Chinese, still battling Chiang Kai Shek’s Nationalist forces, to take over Eastern Turkestan, as it was known at that time. More than three months before Mao announced the founding the People’s Republic, Moscow was ready to give full support to the plan of annexing Xinjiang.
Something interesting in the present tense context, Stalin remarked: “The Chinese population in Xinjiang does not exceed five per cent, after taking Xinjiang one should bring the percentage of the Chinese population to 30 per cent by means of resettling the Chinese for all-sided development of this huge and rich region and for strengthening China’s border protection.”
Today, the Han population in the XUAR has reached 50 per cent, and the Uyghurs are still restive, though decades ago they were ‘liberated’ in Marxist terms.
At that time, Stalin observed: “In general, in the interests of strengthening the defense of China one should populate all the border regions with the Chinese.”
A year later, the formula would be applied to Tibet too.
In September, Mao sent a long telegram to Stalin, mentioning “the most important and necessary (priority) for us is a (air) route from Urumchi-Lanzhou to Xi’an which we hope you will help us create.”
The Great Helmsman also informed Stalin that “500,000 troops intend to enter the province of Xinjiang via Lanzhou in the first days or the middle of November. But the railroads in this region are poor, the conditions difficult, there are few people, and there is no food — therefore we acutely need and hope that you will help us with 30-50 transport aircraft to ship food, clothing, key personnel, and some of the troops.”
Mao pointed out that if help could not come in time: “This would be detrimental to the solution of the Xinjiang problem.”
He promised Stalin, who was keen to reap the economic benefits of the Chinese military operation: “As soon as the transportation of the troops is finished this route will immediately be turned into a civil air route.”
On October 14, just two weeks after the birth of New China, Stalin cabled Mao: “We consider your decision about sending one division from Lanzhou to Urumchi by air transport to be correct.”
He informed the Chinese: “Regarding your request about shipping 1,000 tons of aviation fuel to Urumchi and 200 tons of it to Hami we report that we can give this fuel to Urumchi and Hami via vehicle transport with arrival on site 1-3 November,” adding: “We can give …the five reserve transport aircraft at the disposition of Cde Peng Dehuai …by the deadline you indicate.”
A few days later, Stalin was informed that the Chinese also wanted some 10,000 tons of grain from the Soviet Union for the supply the PLA quartered in Xinjiang. Five days later, Gromyko wrote: “The Soviet Government agrees to deliver 10,000 tons of wheat to the PLA in Xinjiang.”
After having obtained the Soviet support, Mao’s second master stroke was to obtain the defection of the Nationalists. On September 25, Tao Zhiyue, the Nationalist Commander-in-Chief of the Xinjiang garrison and Burhan Shahidi, the Political Commissar, announced the formal surrender of the Nationalist forces in Xinjiang; they had become…Communist. 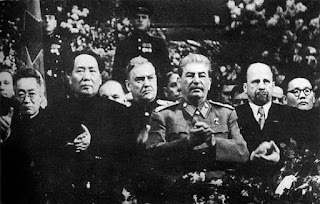 Another victory for Mao…without fighting.
In October, starting from Yumen (in Gansu province, on the old Silk Road), the Communist troops advanced through indescribably harsh terrain, deep gorges, cold desert, “they started a massive advance towards Xinjiang along the North and South of Tian mountain,” says a Chinese account.
On November 5, a forward battalion reached Urumqi by air. The next day, the HQ of the 1 Corps was airlifted.
From November 20 to 26, the PLA took over most of Southern Xinjiang and Kashgar where the HQ of the two Army was established on December 1; all opposition had fallen by then; the annexation of Xinjiang was complete. One understands better why Chinese President Xi Jinping recently presented China’s first Friendship Medal to the Russian President: “President Putin is the leader of a great country who is influential around the world. He is my best, most intimate friend”, declared Xi. Despite ups and downs, the friendship is indeed solid. Without Stalin, Eastern Turkestan might not be Xinjiang today; the Uyghurs would have probably not minded.
Posted by Claude Arpi at 7:17 AM