One more airport in Tibet: govern the borders by first stabilizing Tibet

Radio Free Asia (RFA) has reported that the Chinese authorities have seized some farmland near Lhatse in Central Tibet to build a new airport. The displaced Tibetan villagers would have been offered far less in compensation than the land is worth.
According to a plan announced by officials in the Shigatse prefecture and the regional authorities of the Tibet Autonomous Region (TAR), the airport will be built on land belonging to the Yushang village of Chusha municipality (Lhatse county of Shigatse Prefecture).
A source told RFA’s Tibetan Service: “For Tibetans in Chusha, farming has been their main source of livelihood for many years, and is a tradition handed down to them by their ancestors. The loss of so much land to Chinese development projects is having a negative impact on the daily life of the local people.”
He source added: “Now Chinese authorities are planning to build an airport on Chusha’s farmland, and local Tibetans are being compensated at rates less than the land’s market value.”
The Tibetans also complained that with “new airports and railway stations in all these areas, this will form a hub of activities for tourists and transportation links in all directions.”
But for Beijing, tourist development appears to be the main tool to get Tibet out of poverty.

Wu Yingjie’s interview
In a recent interview with China Tibet Online, Wu Yingjie, the TAR Party secretary was asked how he intended to solve the problem of poverty in Tibet, “alleviating poverty is an arduous task. How can Tibet overcome difficulties and help people of all ethnic groups get out of poverty?” was the question.
The Party Secretary answered: “Over the past two years, Tibet has brought 280,000 people out of poverty. Five counties and districts have been cleared out of poverty, and 25 counties and districts have reached the poverty-off line. The poverty rate has dropped to 7.9 percent. We will continue to focus on impoverished districts and concentrate on targeted-poverty alleviation. First, we must implement differentiated policies. Poverty alleviation for 10 deeply impoverished counties in Lhasa, Lhoka, Nyingchi, and Ngari prefectures should be the responsibility of their respective prefecture or municipality. Poverty alleviation for 34 deeply impoverished counties in Chamdo, Nagchu, and western Shigatse prefectures should be undertaken by the autonomous region via a concentration of resources.”
Lhatse falls under the last area.
If the TAR administration has to intervene, it means that there might be security issues and that the poverty is real a big issue in and around Lhatse.
Wu Yingjie explained his plans: “Second, we must strengthen our support of industry and employment to bring 323,000 people out of poverty. Third, on the basis of respecting the will of the people, we would steadily advance with relocation efforts.”
Whether the population is Lhatse has the power to impose their will is another issue.
Apparently not.
The tirade of the Party Secretary continued: “Fourth, we must increase aid and assistance for Tibet to ensure that 80 percent of Aid Tibet funds goes towards impoverished districts. Fifth, we must implement ecological poverty alleviation measures and integrate ecological funds so that impoverished people who are able to work can have stable jobs and salaries. Sixth, poverty alleviation should be promoted through Party building, with a focus on helping deeply impoverished counties and populations.”
This means that ‘poverty’ is really a problem in Tibet today.

The issue of defense
To bring the other issue, security and defense, the reporter quoted Xi Jinping’s doctrine for Tibet, "govern the nation by governing the borders, govern the borders by first stabilizing Tibet, ensure social harmony and stability in Tibet, and strengthen the development of border regions.”
The Party Secretary admitted that Tibet was an important border area and ethnic region of China “with its border more than 4,000 kilometers long. It is the front line in the struggle against separatism and has the glorious mission to safeguard stability and promote harmony, which must always be our top priority.”
The new airport in Lhatse, apart from creating resentment among the Tibetans, has clearly two purposes. One is to defend China’s border, the other one is to bring tourism in the area to further develop this area and Western Tibet (Ngari region).
The trade with Nepal, south of Lhatse will be an important bonus.
Incidentally, the railway line on its way to Kyirong (and the Nepal border) should soon be arriving in Lhastse.
By bringing more Han tourists in the area, can China increase the happiness to the local population?
It is not sure at all. 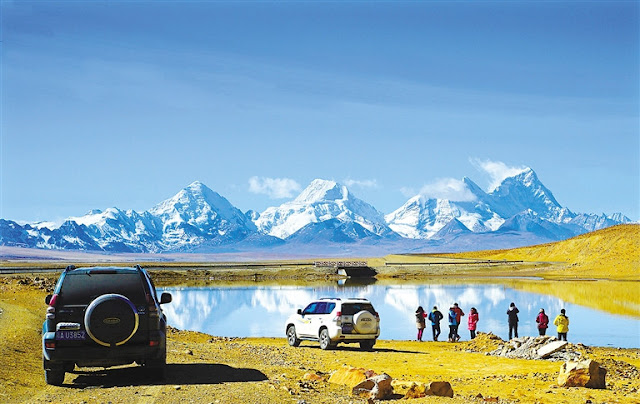