Che Dalha (alias Qizhala), the head of the Tibetan Autonomous Region’s (TAR) Government (and TAR’s Senior Deputy Secretary) visited Zhayul, north of the McMahon line in the Lohit Valley.
Walong, which witnessed the famous battle in November 1962 is located some 50 km south in the same valley.
It is in Walong that the 11th Infantry Brigade and in particular the 6 Kumaon of the Indian Army managed to stop the Chinese advances and paid a high price for it.
The Chinese too suffered heavy casualties.
There is an excellent account on Bharat Rakshak website.
The end of the battle is thus described.


From three sides, the Chinese poured in artillery and MG fire. But the Kumaonis held till 11 a.m. till the situation became militarily futile and orders were given to withdraw. As Lt. Bikram Singh started extricating his men he was cut down. The Chinese suffered terrible casualties (almost 5 times). By midday all troops were asked to withdraw. Some managed to get back through the treacherous terrain. But many NEVER GOT THE ORDERS. They slugged it out to the last man, to the last bullet. As Brigadier N.C. Rawlley said, "6th Kumaon at Tri Junction fought and fought and fought till there was nothing left. After this there was eerie silence." Sikhs, Kumaonis, Gorkhas and Dogras fought shoulder-to-shoulder to the bitter end. Two months after the cease-fire when the Indians returned they found that the Chinese had marked the positions of the dead. Many of the bunkers showed the dead where they had last manned their weapons.


CheDalha's vist
Che, who is also director of the district border defense committee, inspected a Hero Memorial Park in Zhayul area. He told the villagers that the masses should deeply cherish the memory of the revolutionary martyrs.
He laid a wreath for 447 Revolutionary Martyrs' War Memorial.
The memorial is in the honour of the Chinese soldiers who died during the Walong battle as well as the 'heroes' who fought the Tibetan resistance in the late 1950s.
Che, a Tibetan from Yunnan province, is a member of the all-powerful Central Committee of the Communist Party of China.
According to The China Daily the memorial consists of a mausoleum, a monument, a memorial hall and a hero wall. It is said the memorial for the 447-revolutionary martyrs' memorial is nestled in a forest of pines and cypresses. There is an engraved plate reading ‘The Revolutionary Martyrs are immortal’.
According to the Daily, Che slowly walked around the mausoleum, visited the memorial hall, and paid homage to ‘loyal souls’.
With ‘emotion’, he is said to have declared: “a hopeful nation cannot be without a hero, and a nation that does not remember his heroes has no way out (future).”
He expressed the Party’s high respect for the martyrs, who will be remembered forever. It is necessary, he said, to keep them in mind, learn from them, and receive ideological education and spiritual baptism from them.
He concluded by saying that everyone should firmly consolidate the dream of the future, inherit the good Red genes, and not forget the martyrs.
He urged the villagers in Zhayul to watch for strangers or suspicious persons, whether men, women or children; they would have to cross-examine them and send a report to the PLA manning the Indian border.
Che then quoted President Xi “ideals and beliefs are the spiritual ‘bones’ of the party members. We must always strengthen our ideals and beliefs, and more and more closely unite around the party Central Committee with Comrade Xi Jinping as its core.”
And then he said: "we must stick to the Party’s spiritual ideals; have a firm position and convictions in the depths of our hearts. Strive for a bright future and use faith to create a bright future."
Nothing very new, except for the fact that this took place near the Indian border.

The border defense forces
Che also addressed the border defense forces.
He urged them to hold high the banner of socialism with Chinese characteristics in Xi Jinping’s new era; implement Xi Jinping’s strong military ideology and resolutely safeguard and implement the chairmanship responsibility system of the Central Military Commission.
The usual State’s propaganda.
He added that all actions must of the society resolutely follow Xi’s command and stand on the side of the Chinese motherland while strengthening the national defense education, supporting the PLA and the masses, promoting the deep integration of military and civilian and educating and guiding the cadres and masses of all ethnic groups to bloom like a Kalsang flower in the snow-covered lands, while conscientiously be a guardian of the sacred homeland and a builder of happiness at home. 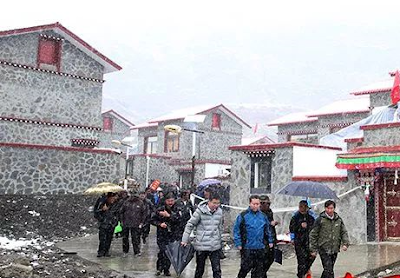 Phurbu Dhondup
It is not only Che Dalha who visited the border areas.
Phurbu Dhondup, the Governor of Lhoka (Shannan), in other words the head the prefectural government, recently ‘inspected’ some border counties of Southern Tibet, particularly in Tsona area, north of Tawang district of Arunachal Pradesh.
While on ‘inspection tour’, he asked the three counties of Nagartse, Lhobrag and Lhuntse to seriously study and learn from their mistakes and “adhere to the government’s policies; adhere to the Party’s planning and guidance, highlighted decisions; adhere to an exemplary life; adhere to the Party’s policies and systematically promote these policies.”
What does it mean?
Some local leaders are not adhering to the Party line?
Probably.
During the recently-concluded National People’s Congress (NPC), Phurbu Dhondup had affirmed that there were 96 border villages under the poverty line in Lhoka Prefecture alone; the prefecture is located north of Bhutan and Tawang district.
Dhondup asserted that the Provinces of Hunan, Hubei and Anhui would help Lhoka “make the dramatic transition” from poor border villages to prosperous ones with electricity, first rate access roads, irrigation systems and potable water. The participation of the ‘rich’ Provinces of China in the scheme is an important factor.
Inspecting the construction of a new village near the Indian border (Xiaokang Village), Phurbu Dhondup emphasized that everyone must adhere to the 'two directions': the protection of China’s sacred territory and the construction of a happy homeland.
Same words than Che Dalha.
Phurbu mentioned about the fight for poverty alleviation which should include scientific planning and the respect for the will of the masses; it should a combination of government support and self-reliance.
This village, like many others, is a border village, being developed with tourism in mind.
The question remains: why so much interest for the Indian borders?
Post-Doklam, Beijing has probably realized the importance of the border populations in case of a conflict with India. And more than 60 years after the ‘liberation’, many of these areas still live in poverty.
The Communist leadership is banking on mass tourism to change this.
And roads will come to the Indian border... 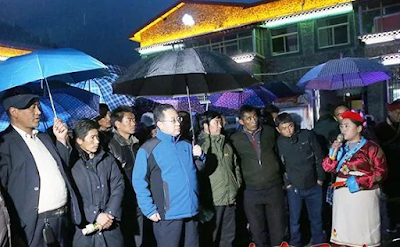 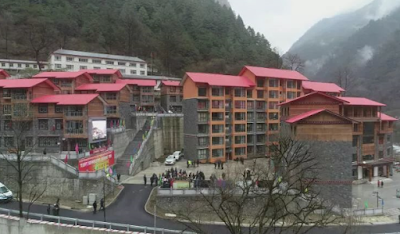 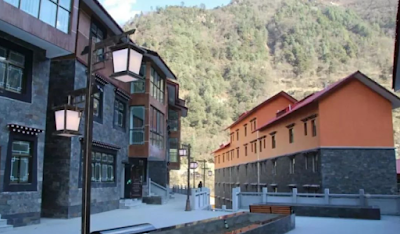 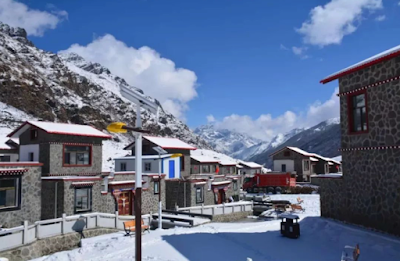 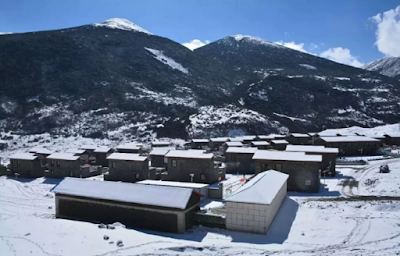