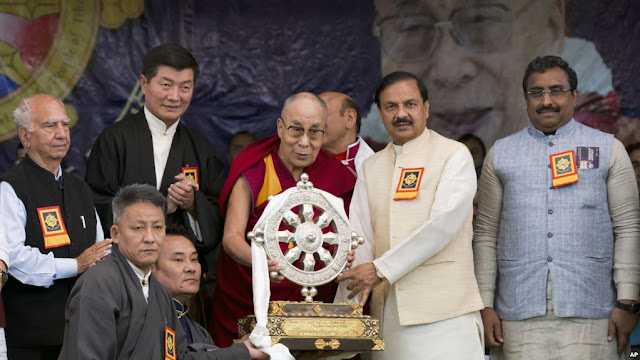 
Are we witnessing a Trumpisation of the Indian Foreign policy?
Some signs tend to show that, like the US president, Delhi is too often changing its stance, principally in its relations with China; though ‘destabilization’ of the opponent might not be the prime Indian motivation, as in the American case.

Leaked Missive
Take the program ‘Thank you India’, planned by the Central Tibetan Administration (CTA) in Dharamsala.
On February 22, Foreign Secretary Vijay Gokhale wrote to Cabinet Secretary PK Sinha, advising Indian government officials, including ministers, to skip the events organized by Dharamsala.
Sinha obliged and ministries were informed to stay away from a function to celebrate the 59th anniversary of the arrival of the Dalai Lama in India.
The Indian and foreign press abundantly commented on Sinha’s ‘leaked’ missive. The MEA apparently said that it was not supposed to have been ‘leaked’, but India is an open society, such things are bound to happen.
Now, despite the missive, two government representatives attended the function which had in the meantime been shifted to Dharamsala.
Indrani Bagchi, the diplomatic editor of The Times of India wrote: “After a stunning volte face on its China policy that made it seem like India was suddenly kowtowing to China, India is trying recalibrate its approach.”
Union Minister for Culture Mahesh Sharma and BJP general secretary Ram Madhav participated in the Dalai Lama’s ‘Thank you India’ programme.
Gokhale had personally met the Dalai Lama and Lobsang Sangay, the Tibetan ‘president’ to ask them to move the celebrations outside Delhi.
In order not to rock the boat with China, the government had earlier refused permission to the Institute for Defence Studies and Analyses (IDSA), funded by the Ministry of Defence, to have a conference on India-China relations in its premises in Delhi. A global parliamentarians’ conference on Tibet scheduled for April, was also not permitted.
Apart from the latest summersault, which does not give a mature image to the Indian diplomacy, a question remains: why did Gokhale and Sinha need to put their warning in writing?
China was certainly delighted by the circular, even though it has not incited Beijing to be ‘nicer’ to India or accept compromises on any of the contentious issues between the two nations. For the last 60 years and more, each time India has kowtowed, China has given nothing in exchange.
The best example has been the Panchsheel agreement; during the four-month negotiations in 1954, India surrendered one by one all its rights in Tibet, and hardly one month after the signature of the accord, the People’s Liberation Army started intruding in Barahoti, in today’s Uttarakhand, while a road was being built on Indian territory, in the Aksai Chin area.

Logical Approach
Has any lesson been learnt?
An article in Bloomberg commented: “That the letter was leaked a day before the foreign secretary was visiting Beijing suggests that a message was also being sent to China – that India would not allow the Dalai Lama to agitate the Tibet issue in India publicly.”
There is no doubt that the high profile Tibetan event in Delhi would have irritated China, but why could the government have not discreetly informed the Office of the Dalai Lama and the CTA, that important visits were due in the coming months (Defence Minister Nirmala Sitharaman, External Affairs Minister Sushma Swaraj and the Prime Minster will soon pay visits to China) and that Delhi did not want any provocation which could trigger a new Doklam when the snows melt.
South Block has a Liaison Office, with a senior officer posted in Dharamsala to communicate with the Dalai Lama and the CTA. The logical approach was to send a message to the Tibetans explaining the situation.
Some have suggested that the objective was to slight the CTA. This is possible and though not verified, it was rumoured that the CTA had gone ahead without coordinating with the Ministry; if true, it would be a slip.

Serious Issues
It has also been said that the November 2017 clandestine visit to China of former Tibetan Prime Minister Prof Samdhong Rinpoche, had irritated South Block. The Chinese government would like the Dalai Lama to accept that Tibet has always been a part of China. That would create serious problems for India as it would mean that the McMahon Line, agreed to by independent Tibet and British India on the side of the Simla Conference in 1914, would have no legal worth. It is however doubtful if the Dalai Lama will ever concede something which is blatantly untrue.
It is also true that the CTA has not always been sensitive to India’s problems. When during the Doklam standoff, Lobsang Sangay unfurled the Tibetan flag on the shores of the Pangong Lake, bordering Tibet in Ladakh, it was not of very helpful to cool the tempers at the trijunction.
In the meantime, deep reforms are taking place in China. For example, the United Front Work Department which deals, amongst other things with Tibet, has been given an increased importance, taking-over the State Council Overseas Office, the National Ethnic Affairs Commission and the State Administration for Religious Affairs. Observers expect that it will translate into a tighter control over religion and ethnic issues, in particular in Tibet and Xinjiang. This has implications for India.
These are serious issues which should be taken as priority by South Block while India’s Tibet policy should discreetly be fine-tuned in coordination with Dharamsala; one party should not embarrass the other.
As for the ‘Thank you India’ program, one way for the Tibetans to ‘thank’ India would be to reassert the Indo-Tibet borders in places such as Demchok, Chumar or Barahoti.
In the meantime, ‘Trumpisation’ will not help anybody …except China.
Posted by Claude Arpi at 7:32 AM