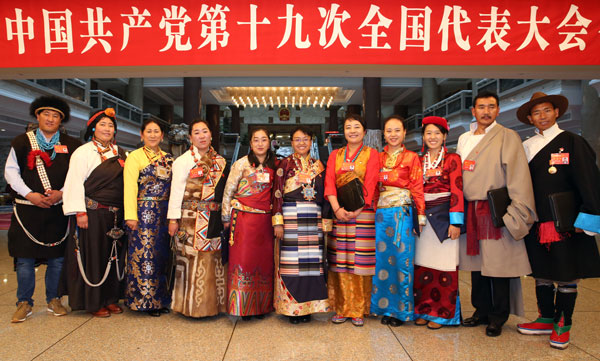 The High-Mass of the Chinese Communist Party (CCP) has started.
Every five years, it follows the same precise ritual. The outgoing CCP’s General Secretary (in the present case, Xi Jinping), gives a 3 hour long speech, describing the internal and external changes facing the country, which the party needs to address.
Everything is scripted.
First, the election of 2287 delegates to the 19th Congress which took place months ago, among 40 ‘electoral blocs’ – representing each of China’s 31 provinces as well as the central party organs, national State institutions, the People’s Liberation Army, etc.
There are two types of delegates, the ‘big shots’ who will make it to the 200-odd member Central Committee (CC) and the ‘grass-root’ delegates which count for nearly half of the delegates; and five or seven ‘big ones’ who will eventually reach the Communist Paradise, the Politburo’s Standing Committee.
The Party Congress has three main purposes.
First, it establishes a new party line to be followed for five years; the Congress is the authoritative body to do so. The ‘draft’ read by the General Secretary has been seen and commented by thousands and hundreds of amendments have already been incorporated.
Alice Miller, one of the best experts in CCP’s affairs wrote: “Over the course of its session, a party congress sets down a consensus evaluation of the party’s work over the five-year period since the preceding congress and an assessment of the party’s present situation, and it sets forth general guidelines—the party’s line—for the party’s priorities, emphases, and tasks for the coming five-year period until the next congress.”
At the end, a resolution will endorse Xi Jinping’s speech establishing the party’s consensus on all policies that the party leadership will face.
Then, according to the Constitution, a CC Plenum must convene at least once a year to follow up on the directions given by the Congress.
The second purpose of the Meet is to revise the Party’s Constitution and introduce changes such as a new theory, a brain-child of the current Secretary General.
Finally, the Congress nominates a new leadership for the five years to come. It includes the CC whose plenums give directions to the Party between two Congresses, but also some 170 alternate members whose role is replace the CC’s full-members when required (when full members are sent to jail for corruption for example), as well as a new Central Commission for Discipline Inspection (CDIC), whose job is to tackle corruption.
Finally, before the Congress closes its doors, the CC’s first Plenum will appoint the top party leadership. It also nominates the all-powerful Central Military Commission, a new Secretariat (the body that facilitates the implementation of Politburo decisions) as well as the State Council or Cabinet, headed by the Premier, usually the No 2 in the Party’s hierarchy.
During his speech on October 18, President Xi Jinping outlined his vision for the next five years of China’s development. According to The South China Morning Post, “he vowed to step up ideological guidance within the party, strengthen its anti-corruption campaign, retain the government’s grip on Hong Kong and Macau, and oppose any moves towards independence in Taiwan.”
One of the most expected parts of the speech was the inclusion of Xi’s so-called political philosophy; it will thereafter be known as ‘socialism with Chinese characteristics for a new era’.
The new motto will be repeated thousand times all-over the Middle Kingdom. It is said that there are 14 elements behind the elaborated concept; the first is that Party should lead in every aspect of life in China. Xi declared that “the dream of national rejuvenation would only be a fantasy without the leadership of China’s Communist Party. The party should lead in all areas and the authority of the party central leadership should be respected.”
Other highlights are ambitious targets to be achieved during the next 30 years and more, “From 2035 to 2050, China should become a nation with pioneering global influence.” The momentum of the anti-corruption campaign is ‘irreversible’ and rule by law would be maintained.
Of course, national security would be boosted and the Party would resolutely protect its sovereignty and interests. Xi spoke of ‘historical breakthrough’ in national defence and military reform: “The navy has protected the nation’s maritime interest and its army rapidly upgraded its weaponry. …The People’s Liberation Army should be a ‘world class’ force by 2050.”
Some in India may think, it is not necessary to worry; 2050 is far-away. However it is crucial to watch the CMC’s new composition. It may bring radical changes and surprises which could determine if new ‘Doklam’ incidents would take place in the years to come.
Sharp observers have predicted that the number of Vice-Chairmen of the Commission may go from two to four. Some of Xi Jinping’s close allies are expected to be promoted.
One is General Zhang Youxia, director of the Equipment Development Department, who is tipped to become one of two vice chairmen, while present vice chairman, Xu Qiliang, is expected to stay on. Zhang, like Xi is native from the northwestern province of Shaanxi and both he and Xi are children of former senior PLA officials.
The other two candidates are Li Zuocheng, director of the Joint Staff Department and Miao Hua, the new head of the Political Department; they may also make it.
Whether China will follow a ‘peaceful rise’ or a more tumultuous one, will depends on the capacity of Xi to impose a ‘rule of law’.
If the generals remain ‘wild’ as in the past, India may have to face a serious situation.
The battle is not yet played out.


And now the Tibetan delegation.
Out of 29 delegates, 11 Tibetans are from the 'grass root'.
While the 'big shots', from the regional Standing Committee of the Tibetan Autonomous Region like Wu Yingjie, Lobsang Gyaltsen or Che Dralha wore suits and ties, the 'grass root' delegates have no choice but to show their regional costumes.
It is always a great attraction for the journalists and photographers.
Can it be considered as a display of Tibetan culture?
Are the delegates just for the show in Beijing ?
Difficult to say. 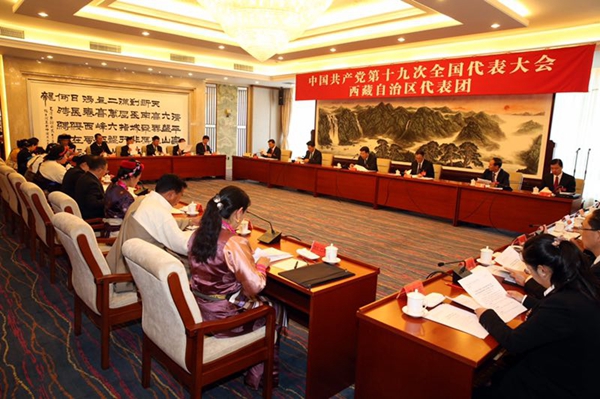 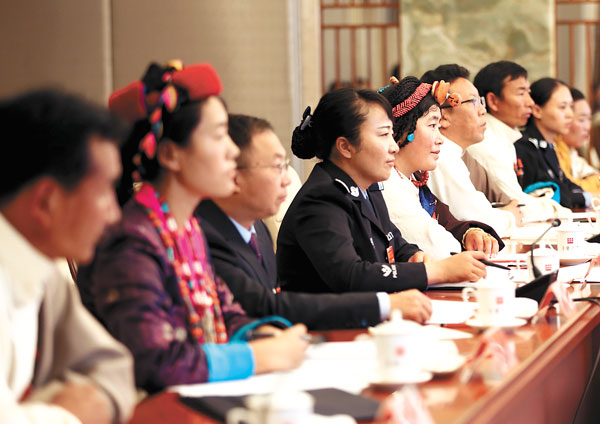 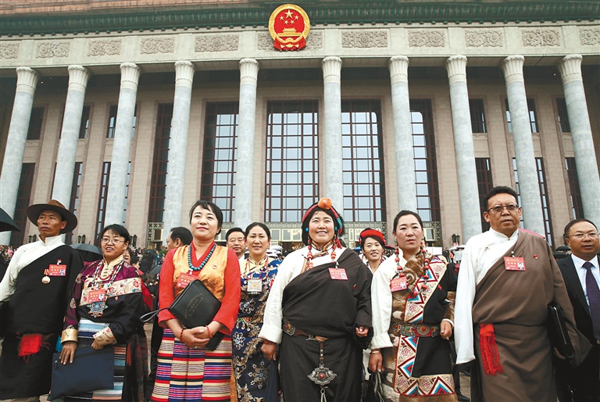 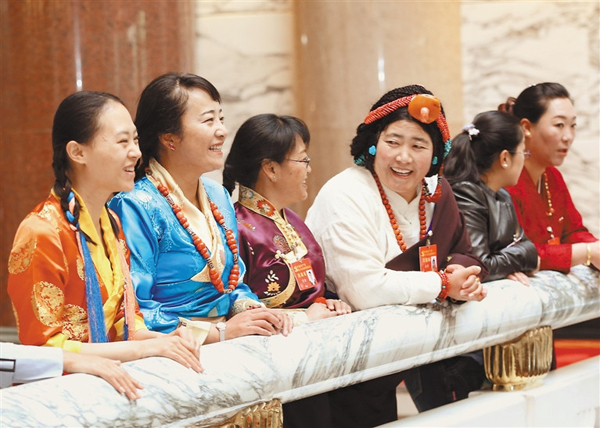 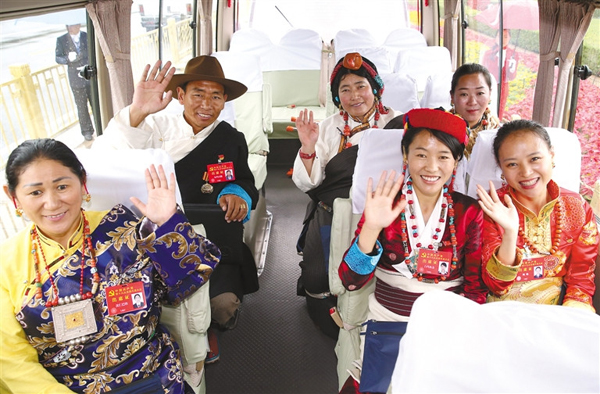 Good to read your perspectives on the Tibetans at the 19th Party Congress. Here is something that I wrote about the issue on the blog of the International Campaign for Tibet: https://weblog.savetibet.org/2017/10/chinas-19th-party-congress-and-tibetans/

"Among the Tibetan delegates, majority of them are officials at different administrative levels; a few provincial level officials from Lhasa; a governor from Kanlho Prefecture; a vice governor of Sichuan Province whose name is written as Yao Sidan, but is actually Dorjee Rapten; and a few prefectural level party secretaries from Qinghai. There is a gynecologist from Ngari and a teacher from Lhasa."