Xi may not be all powerful 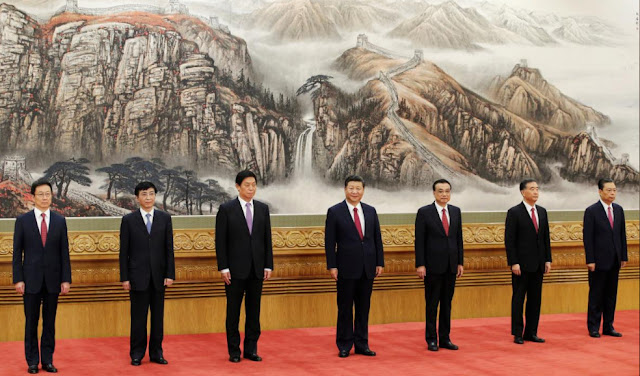 My article Xi may not be all powerful appeared in Rediff.com.

'He still has to deal with party norms and traditions and has been careful to follow the order of seniority,' points out Claude Arpi.

Nearly thirty years ago, one of the best China watchers, Belgium-born Simon Leys wrote about the ‘Art of Communist China watching’ in the New Times Book Review: “Without an ability to decipher non-existent inscriptions written in invisible ink on blank pages, no one should ever dream of analyzing the nature and reality of Chinese communism. Very few people have mastered this demanding discipline.”
Leys was reviewing a book written by Father Laszlo Ladany, a Jesuit priest living in Hong Kong, who ‘with good reason’ was acknowledged as the doyen of the ‘watchers’.
For many years, Father Ladany published a weekly China News Analysis. Leys said: “all China watchers used to read his newsletter with avidity; many stole from it—but generally they took great pains never to acknowledge their indebtedness or to mention his name. Father Ladany watched this charade with sardonic detachment.”
I could not help thinking of these words while watching the unfolding of the 19th Congress of the Chinese Communist Party.
Till the last minute, it was difficult to make out what would happen next.

Xi Jinping the Winner
Xi Jinping undoubtedly emerged the winner on most of the fronts.
First and foremost, the 19th Congress approved an amendment to the Party Constitution enshrining ‘Xi Jinping Thought on Socialism with Chinese Characteristics for a New Era’.
Though the new Central Committee and Central Commission for Discipline Inspection are more of less along the expected lines, the Politburo and the Standing Committee brought some surprises.

The new lineup
The new Politburo’s Standing Committee now comprises of President Xi Jinping, Premier Li Keqiang, Li Zhanshu, Wang Yang, Wang Huning, Zhao Leji and Han Zheng.
The South China Morning Post commented: “The unveiling of the new lineup of Chinese leadership marks the climax of the twice-a-decade leadership reshuffle after months-long intense horse trading and power struggles in the lead-up to the 19th party congress.”
The presence of Li Zhanshu, Xi’s chief of staff, who is to take over the chairmanship of the National People’s Congress is a proof of Xi’s control over the appointments. Ditto for Wang Huning, the party theorist who should take the charge of ideology, propaganda and party organization, while Zhao Leji will replace Wang Qishan, as the new anti-graft tsar.
Wang Yang will take the seat of Yu Zhengsheng as chairman of the Chinese People’s Political Consultative Conference.

The Surprises
A noticeable absence is Chen Miner, the Party Secretary of Chongqing, who in many quarters, was expected to be anointed ‘heir apparent’. Apparently Xi did not want a ‘successor’ as yet.
A few days ago, The South China Morning Post (SCMP), belonging to Xi’s friend, Jack Ma, the owner of Alibaba, and which has been by far the best-informed during the entire Congress, noted: “Guangdong party chief Hu Chunhua – the widely tipped successor – and the president’s protégé, Chongqing party chief Chen Miner, are both likely to be missing from the Politburo Standing Committee. Instead, they will join the Politburo, which is one rank lower.”
It is what happened. Does it mean that China watching is easier today than in the days of Father Ladany?
Not really as the opacity of the Party proceedings has not changed much.
The great surprise was that Wang Qishan, who is responsible for making thousands of heads on the Party roll, has stepped down from the Standing Committee, due the age-limit norm. It was confirmed when his name did not appear in the list of the new Central Committee members. Many ‘watchers’ were expecting Xi to break an unwritten retirement-age rule to keep his friend and colleague Wang in the Standing Committee.
Two members of the powerful Central Military Commission (CMC) made it to the Politburo. Apart from Air Force General Xu Qiliang, presently CMC Vice-Chairman, General Zhang Youxia, a family friend of Xi, was selected as the second vice-chairman.

Constitutional Changes
Adding Xi’s name in the Party constitution brings him at par with Mao Zedong and Deng Xiaoping. Xi now dreams to make China into a great Socialist power by 2050
Xi promised that China, under his leadership, will be an upholder of world peace and stability; his announcement that the Middle Kingdom was ready to play a greater role in building ‘a common destiny for mankind’, is taken by many with a pinch of salt. Only the future will tell.

Other changes worth noting:
•    Party's 'absolute' leadership over the Army
In a resolution approved by the Congress, Xi Jinping's military thinking and the Party's ‘absolute’ leadership over the armed forces have been included in the Constitution.

Not all-powerful
Contrary to what many have written, Xi might not be all-powerful; he still has to deal with Party norms and traditions: “he is careful not to break the age rule and to follow the order of seniority. These political norms are critical for the 89-million member Communist Party to have consensus at the top and maintain stability,” wrote the SCMP which also noted: “Xi is also not blindly following the established path. He has made a decision with far-reaching consequences in not naming a clear-cut successor and promoting his choice to the Politburo Standing Committee.”
Another sign that Xi may not have full control, is the reduced size of the CMC which has only 7 members (apart from the two Vice Chairmen: Xu Qiliang, Zhang Youxia, others are Wei Fenghe, Li Zuocheng, Miao Hua, Zhang Shengmin) compared to 11 during the previous Congress.

The role of women
When the list of the delegates to the Congress was first released in July, many watchers thought that it would mark a new area for women, who made up 24.1 per cent of the 2,287 delegates.
The official media pointed out that it reflected the efforts made by the Party “to give women members a bigger say and improve gender equality and social stability.”
But Chinese women leaders are still practically excluded from the top of the hierarchy. Of the 204 members of the Central Committee, just 10 are women; the same figure that for the 18th congress of 2012. And only one lady, Sun Chunlan made it in the Politburo. She will probably retain her job as Chief of the United Front Work Department. That is disappointing.

The ‘ethnic minorities’
As for the ethnic minorities, they have got a slightly better deal in the Central Committee, with 16 members from ethnic origin compared to 10 only, five years ago.
Incidentally, the Tibetans have four representatives have been selected as members of the Central Committee (Lobsang Gyaltsen and Che Dalha) and Alternate members (Norbu Thondup and Yan Jinhai, a Tibetan from Qinghai); it is a first.
Further, Wang Huning, the newly-appointed member of the Politburo’s Standing Committee will probably represent Tibet at the National People’s Congress in March. The question is why a Han leader should represent Tibet; Han chauvinism will continue for some time more.
In any case, Wang’s presence does not mean that life will become easier for the Tibetans or the Uyghurs. Chen Quanguo, the former Party Tibet Secretary, presently posted in Xinjiang has been rewarded with a seat in the Politburo for the repressive measures that he introduced in the restive Muslim region.

What does this mean for India?
One will have to wait and see.
As Deng Xiaoping liked to say, ‘let us seek truth from facts’.
Thirty years ago or today, it is still not easy to read the future of the Middle Kingdom in tea leaves.