Does India need to be invaded by China to wake up? 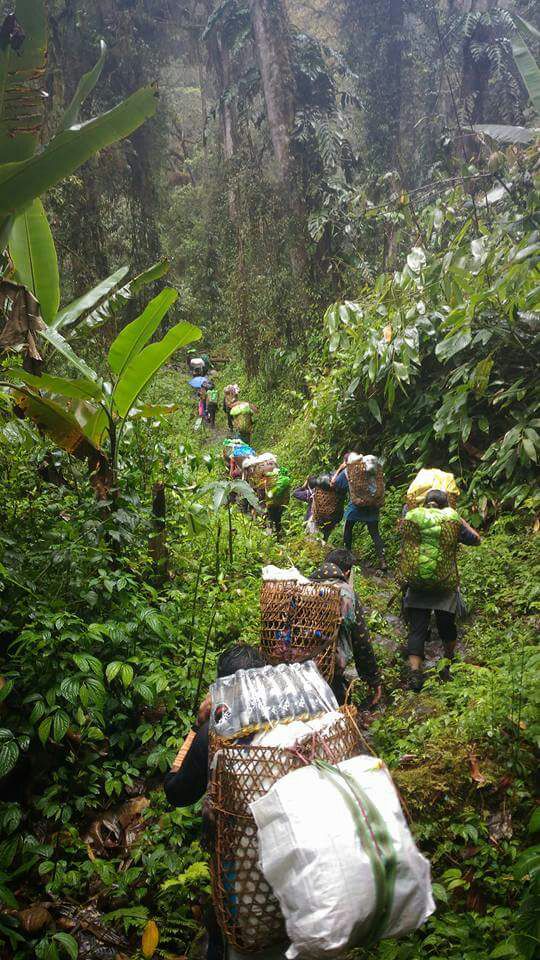 My article Does India need to be invaded by China to wake up? appeared today in Rediff.com.

Very few in India have heard of Taksing.
It is the last village on the Tibet (China)-Arunachal Pradesh border, and the first village likely to be invaded if Beijing retaliates.
Scarily, it takes jawans THREE days of walking to reach Taksing.
In all the noise surrounding the Doklam confrontation, Claude Arpi focuses on a crucial issue that has hardly been covered -- the construction of roads for the armed forces and the local population to reach the most remote border posts.

Very few incidents have triggered so many comments as the confrontation at the trijunction between Tibet, Bhutan and Sikkim.
On June 16, 2017, Chinese troops entered a stretch of land at the southern tip of the Chumbi Valley to build a road …on Bhutanese territory.
They were stopped by the Indian Army.
Beijing’s response was sharp, probably due to the surprise; China did not expect Delhi to militarily defend Thimphu. It is also true that the trijunction is a strategic hotspot for Delhi, and by occupying it, the Chinese would have a ‘view’ not only on the Chumbi Valley but also on the Siliguri corridor, which is India’s main strategic weakness in case of a military conflict.

Trying to change the historical posts
On June 30, 2017, the Ministry of External Affairs in Delhi affirmed that in 2012, it had been agreed with China that the status quo would be maintained in this area: “The two Governments had in 2012 reached an agreement that the tri-junction boundary points between India, China and third countries will be finalised in consultation with the concerned countries.”
Probably getting upset with the delay in finding a solution, Beijing decided to take the matter in its own hand, as it had done earlier in the South China Sea. Beijing has a tendency to believe in the principle that it is better to first take ‘possession’ and then start talking.

The Infrastructure to the Frontiers
One issue has hardly been covered by the Indian media, though crucial for the defence of the borders: it is the construction of a decent infrastructure for the Indo-Tibet Border Police Force (ITBP), Army and the local population to reach the most remote border posts.
On July 18, it was announced in Parliament that some 73 roads were being built along the Sino-India border. According to PTI, Minister of State for Home, Kiren Rijiju told the Lok Sabha: “The government has decided to undertake construction of 73 roads of operational significance along Indo-China border. Out of these, 73 roads, 46 are being constructed by the Ministry of Defence and 27 by the Ministry of Home Affairs.”
The minister said 30 roads had been completed so far though all the roads had been scheduled to be completed by 2012-13. According to the government, the main reasons for the delay are: limited working season, logistical issues due to high altitude, rugged and difficult terrain, natural calamities, delay in land acquisition and forest/wildlife clearances.
The last justification is surprising as the Modi government had decided in 2014 to do away with the environmental clearance for road projects located within 100 km of the Line of Actual Control (LAC).
This raises another issue: why cannot the private sector be involved, especially at a time when the Modi Sarkar tries its best to invite private players into the defense sector?

The Most Difficult Road of all
Very few in India have heard of Taksing.
It is the last village on the border with Tibet (China) in Upper Subansiri of Arunachal Pradesh. It is certainly the first village susceptible to be invaded in case the People’s Liberation Army (PLA) decides to retaliate after the confrontation in Sikkim. Here the villagers believe that it will take at least five to ten years to see a road.
It is not that nothing is happening.
On April 6, 2017, the Border Roads Organisation (BRO) managed to open a new section connecting Tame Chung Chung (TCC) and Nacho. The inhabitants living in the vicinity of Tame Chung Chung (locally known as ‘The Land of Snakes’) had dreamed of seeing this road for decades, but like many other things for the border population, it had remained a dream.
A BRO’s communiqué explained: “The area is located in an extremely remote area with rugged terrains, thick vegetation and inhospitable weather. The place has remained inaccessible since 2009.”
In fact, the road was to be opened in 2009.
The same report noted: “The persistent efforts of BRO engineers have finally changed the scenario. The road comes under Project Arunank, run by the Indian Army in five districts of Arunachal Pradesh. The Nacho-TCC section of the road is strategically vital due to the Chinese presence nearby. The road does not reach the LAC as yet, but the completion of this portion marks a major step towards Taksing, the last border village in Arunachal.”
In October 2014, The Deccan Chronicle reported that the Chinese PLA had been focusing on the Taksing area: “After the recent Ladakh incursions, frequent intrusions by China’s PLA in Arunachal Pradesh’s Taksing region have come to the notice of the security agencies… Security sources also confirmed this incursion had come to their notice about a month back, but the PLA had gone back after a brief stay.”
Around the same time, the Times of India noted: “Both armies undertake regular patrols to lay claim to 8-10 disputed areas like Asaphila, a remote 100 sq km.” PLA’s “heightened activity” had been witnessed in Asaphila area for months. “The PLA troops, with vehicles and other equipment, then tried to build a road till Point 2445. They were then stopped from doing so by our soldiers,” a source told the newspaper.
At that time, some local villagers had managed to shoot a short video on their phones of the PLA ‘visiting’ their village. The last Indian military outpost before the border is still some 35 km away from the newly-opened section, but the construction will hopefully be easier: “Due to the exceptionally hard rock and treacherous terrain, this portion of the road took many more years than expected,” said the BRO statement, adding that TCC is situated near the confluence of Subansiri and Tsari Chu river valleys: “(it) acts as a gateway to both the valleys and its connectivity was essential for further development of the area.” The Army organization admitted that a large number of personnel suffered severe injuries during the construction work and equipment worth crores of rupees was lost in landslides.
The question remains: have the Central and Arunachal authorities finally decided to undertake the construction of roads in border areas on a ‘war-footing’?
It is not sure. The work is frightening slow.

Already in the fifties
Already in the 1950s, there was a crying need for a road.
In 1957, Capt. LR Sailo, then assistant political officer in Taliha of Subansiri Frontier Division (NEFA), reached the administrative camp in Limeking and wrote in a superb account titled, “Report on an Exploratory Tour Undertaken in the Upper Subansiri Area and the Tsari Chu Valley”, “The location of Limeking vis-a-vis the international border has been determined; the exploration of the Subansiri westwards of Limeking upto the international border has been completed and the confluence of the Subansiri and the Yume Chu has also been ascertained (Taksing); the determination of the precise location of the confluence of the Subansiri and the Tsari Chu; the Tsari Chu valley has been explored upto the international border with Migyitun settlements (in Tibet); a sketch map of the area has been prepared with estimate of the locations of villages or settlements, the courses of rivers, mountains, and important routes.”
Capt. Sailo’s conclusions were clear: “The urgency and importance of constructing roads from Daporijo to the border settlements of Lower Na (Taksing) and Migytun (Maja) cannot be over-emphasised.”
Of course, since 60 years, babus from the MHA or the State Government have never set a foot in these areas.

The Present Situation
Unfortunately not much has been done during the following 50 years — a real tragedy for the defence of India and the border populations.
A few months ago, I received a message from Hiwak Chader, who lives in Taksing; he explained the difficult situation for the local population. After saying that he felt extremely proud to be an Indian, he noted: “During these 69 years our country has made tremendous progress in the field of science and technologies; we also joined the elite club of few selected country to have achieved a fate of sending the mission to Mars which raise our stature in international level. On the other hand, people of Taksing Village are deprived of all those developmental activities; still local peoples have to resort tiresome and risky three-day trek to reach nearest motorable road.”
He continued: “We have been sentinel of the country since time immortal but in return what we are get, underdevelopment and apathy attitude of the government.”
He blamed both the Central and State governments: “Taksing is a frontier village located at an advance position for the defence agencies near Indo-China border. When there is disruption in transportation, electricity and communication in capital complex for a single day, the people get irritate like anything, just think about the magnitude of hardship which dwellers of Taksing renders in a so called 21st century.”
Chader concluded that Taksing, which is naturally richly endowed in varieties of vegetable and fruits: “can easily feed entire population of Upper Subansiri district at least for one session. However in absence of road product perishes.”
He does not mention the hardship of the CRPF jawans and the Army who have to man the frontier. Though there is a helipad for emergency, it takes some three days for a jawan to walk from TTC to Taksing (while a local porter can make it in two days).
It is extremely doubtful that Takshing will see a road in the next 5 years; let us hope that it won’t be too late.
It is not that there is no solution: one would be to involve the private sector, or even ‘friendly’ foreign countries such as Japan in the road construction; also the BRO or any other contractor should give better salaries to the local workers to insure continuity in the laying of the road; more camps for road workers could be created en route between TCC and Taksing, etc.
But the main issue remains: is there the will to reach the frontier at any cost? Does India need to be invaded to wake up?
Let us pray not. 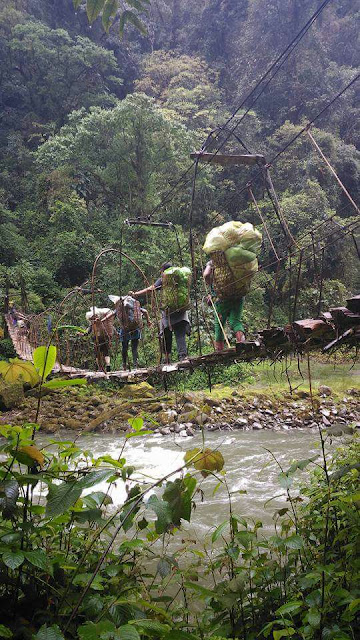 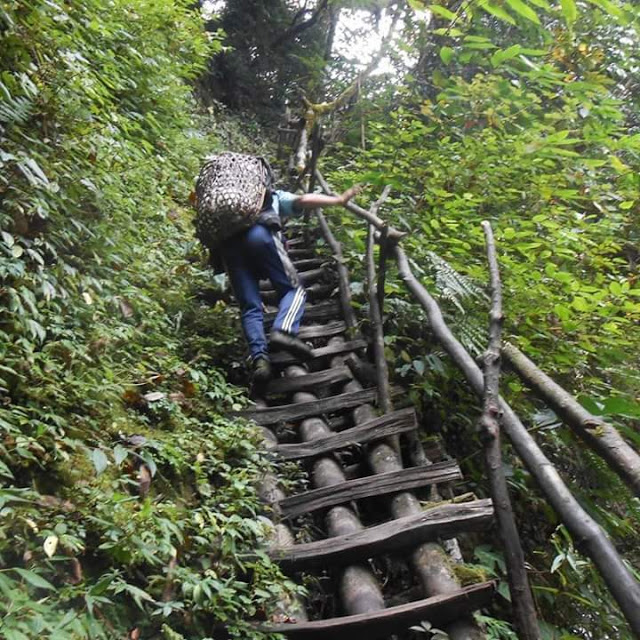 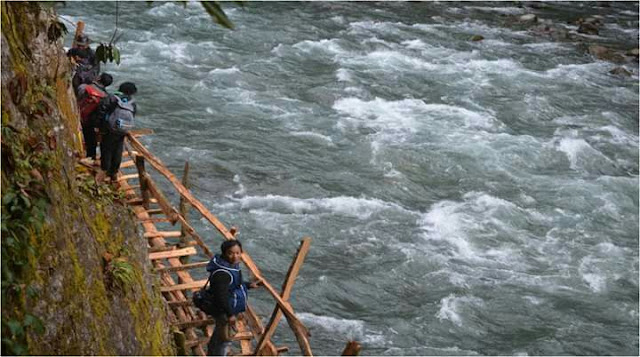 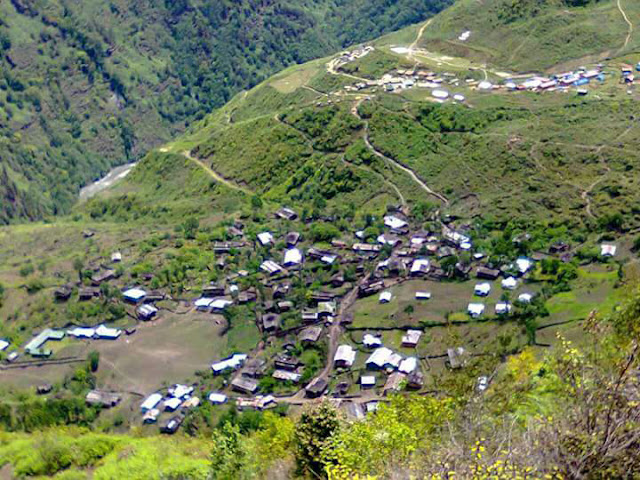 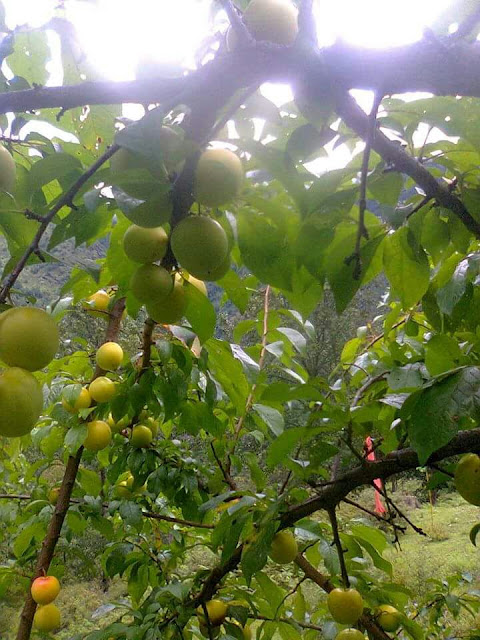 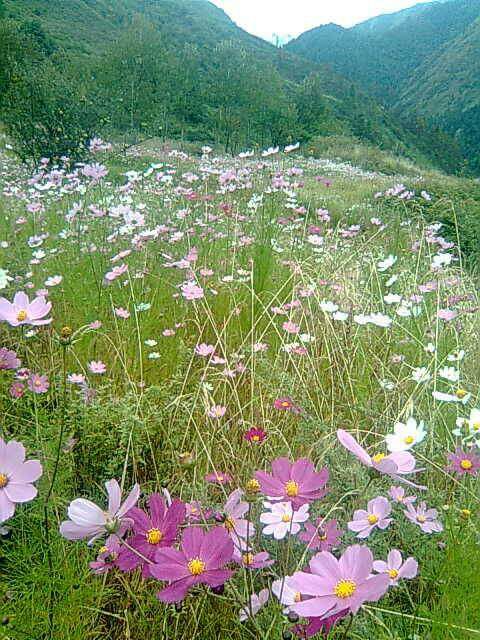 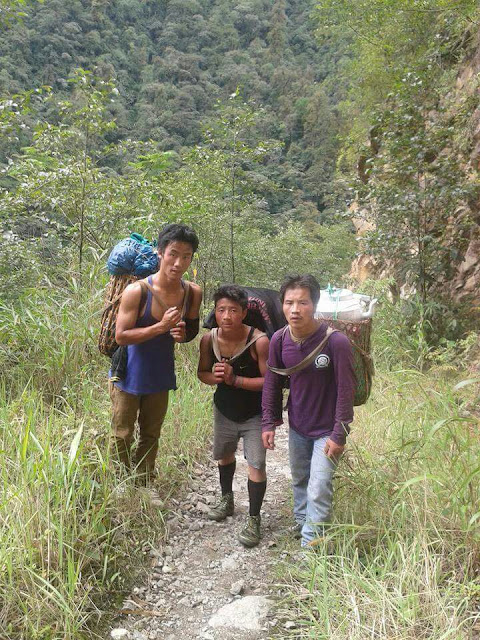 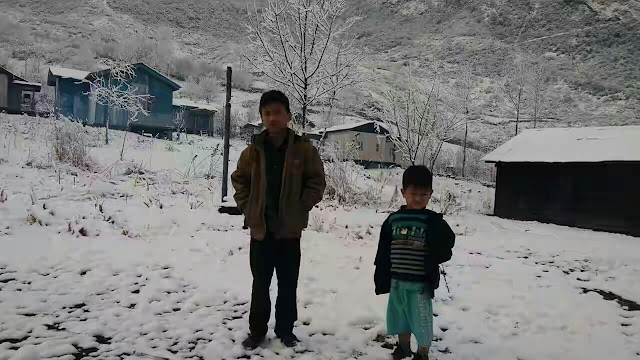 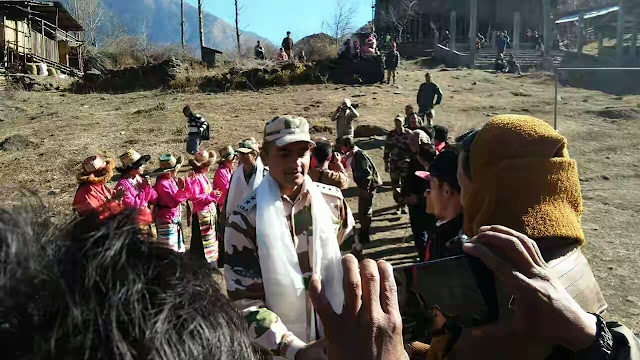