The most remote Indian village on the Indo-Tibet border

I am posting below an telling email received from the most remote Indian village on the Indo-Tibet border.
I have repeatedly mentioned on this blog the difficulty to connect the last village of Taksing in Upper Subansiri district of Arunachal Pradesh to the rest of the country (see a Road to the Border).
Hiwak Chader, who lives in Taksing, explains the difficult situation:


It has been 69 years India attained her Independence, being a citizen of this great country I feel extremely proud to be an Indian. During these 69 years our country has made tremendous progress in the field of science and technologies ; we also joined the elite club of few selected country to be achieved a fate of sending the mission to mars which raise our stature in international level. On the other hand, people of Taksing Village under Upper Subansiri district is deprived of all those developmental activities, still local peoples have to resort tiresome and risky four day trek to reach nearest motorable road. Recently one young person Shri Talok Chader has lost his life in an unfortunate incident of landslide en route to Taksing causing great lose to bereave family member.
I don’t know whom to blame for premature death of young life, weather to the state government or to central government.
We have been sentinel of the country since time immortal but in return what we are get, underdevelopment and apathy attitude of the government (Union and state government).
It is pertinent to be mentioned that Taksing is a frontier village which locate at advance position than defence agencies near Indo-China border. When there is disruption in transportation, electricity and communication in capital complex for a single day, the people get irritate like anything, just think about the magnitude of hardship which dwellers of Taksing renders in a so called 21st century.
The well connected road will not only bring benefit to local populace but also bring immense relief to defence agencies particularly in the mobilization of its personnel and defence related equipment. The well connected road will also improve war preparedness in our side and also reduce high aerial transportation cost incurring by the defense agencies. Another aspect of well connect road will is that, rural people can sell their agriculture product in Daporijo town and in return can fetch good source of income.
Taksing has bumper production of different varieties of vegetable and fruits, which can easily feed entire population of Upper Subansiri district at least for one session. However in absence of road product perishes.
Despite of all those negligence from our popular representative government, we have hope, a hope that inspires us to dream to have well connected road, a dream of prosperity and a dream of better future.
Few point I would like to suggest to the government (both state and central) for early contraction of road to this frontier village:
Last but not least our Prime Minister, Narendra Modi has made a promised that by 2019 all villages of the country will have well connected road. We are hoping that our village will not deprive of his promises. 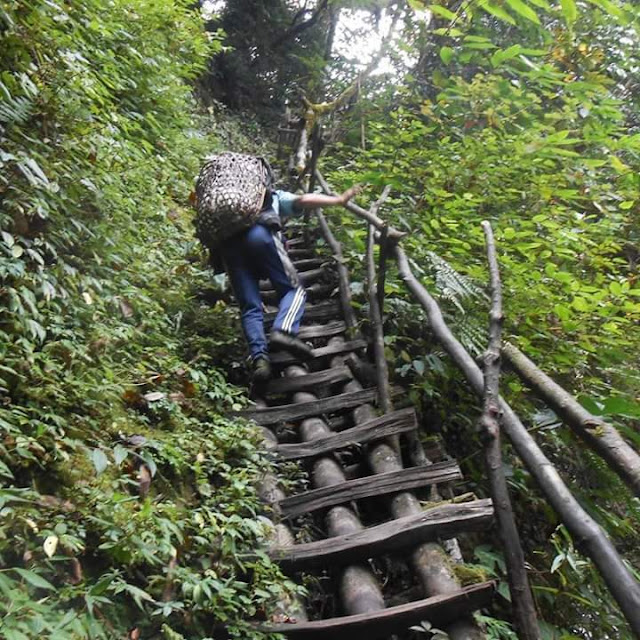 It is difficult to put the entire blame on an individual, a particular agency or a government.
One of the factors was Jawaharlal Nehru’s romantic views on the border.
He believed in the ‘noble savage’ described by French philosopher Jean-Jacques Rousseau: “Nothing is so gentle as man in his primitive state, when placed by nature at an equal distance from the stupidity of brutes and the fatal enlightenment of civil man.”
About the inhabitants of the North-East Frontier Agency (NEFA), the first Prime Minister of India wrote: “I am not at all sure which is the better way of living, the tribal or our own. In some respects I am quite certain theirs is better. Therefore, it is grossly presumptuous on our part to approach them with an air of superiority.”
Verrier Elwin, the British-naturalized anthropologist, who served as Tribal Advisor to the Governor of Assam, could only see the anthropological side of the issue, forgetting the strategic as well the economic aspects of the border development; it resulted in a huge development gap between the frontier areas and the rest of India, which became critical after Tibet’s invasion in 1950, more particularly when China attacked India in October 1962; as a result, the country was not ready to give Mao’s troops a befitting response.

Difficult Terrain
It is a fact that the terrain is very difficult as mentioned in my earlier post.
Recently, the Director General Border Roads (DGBR) Lt Gen Suresh Sharma concluded a five day visit to Arunachal Pradesh; he visited Upper Subansiri district from September 28 to 30.
According to a press released: “[Gen Sharma] reviewed [the] progress on all important strategic roads in Tawang sector and in Subansari valley. He also inspected the Bailey Bridge at Genensiniak [near the confluence of the Tsari chu and Subansiri chu], which is an extremely difficult launch [sic] and the first single span Bailey Bridge over Subansari River. He informed all concerned that the Ministry of Defence is considering higher budget and special powers for construction of these strategic roads. BRO is working under extremely difficult constraints including terrain and weather.”
Another communiqué says: “Completion of these roads would not only facilitate in a tremendous improvement of defence preparedness, but also contribute immensely to the launch of large number of HEP [Hydropower Plant] projects planned over River Subansiri with huge financial outlay, which would ensure development, and prosperity of the state.”
These HEPs may not be a blessing for the area but this is another issue.
The Assam Sentinel also mentioned the visit: “Since the Project’s Area of Arunank [which covers Upper Subansiri, Lower Subansiri, Kurung Kumey, Kra Dadi and Papumpare districts] is very vast and roads are underdeveloped, all movements of the DGBR were planned by air. However, due to inclement weather conditions the aerial movements were adversely affected.”
Finally, the DGBR travelled by road from Naharlagun (HQ of the Arunank project) to Ziro, and then to Daporijo, the district HQ: “A small window of opportunity, supported by a quick response from the Air Force facilitated an air lift from Daporijo to Limeking on September 29.” 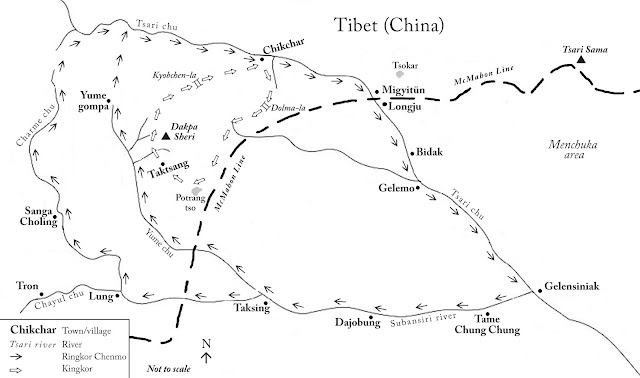 At Limeking, the official inspected the Bailey bridge “launched by BRO at Gelensiniak across the mighty Subansiri River.” The bridge is the first one constructed on the Subansiri: “After inspection of the bridge construction, the DGBR was driven up to TCC [Tame Chung Chung] where he was briefed about the critical roads from the vantage point which presented a clear view of both Subansiri as well as Tsari Chu valleys.”
The general spent the night at Limeking where “the remotest detachment of BRO is connected by road.”
Gen Sharma did not make it to Taksing, still 4 days away by road.
On September 30, as flights were cancelled due to bad weather, the DGBR had to undertake the journey from Limeking to Daporijo by road; it took seven hours. From Daporijo he could finally fly to Guwahati by choper.
This illustrates the difficulty of the terrain.
The Sentinel adds: “The morale of BRO personnel has indeed received a tremendous boost by DGBR’s visit which would definitely go a long way in timely achievement of the targets.”
What to say?
Let us not forget that 2016 is the Monkey-Fire Year in the Tibetan calendar.
For centuries, every twelve years the area witnessed the Tsari Pilgrimage during that year. In Tibet and on the borders, Tsari has always been synonymous of ‘sacred area’. With the Mount Kailash and the Amye Machen in eastern Tibet, the pilgrimage around the Dakpa Sheri, the ‘Pure Crystal Mountain’ has been one of the holiest of the Himalayan World.
Pilgrims used to cross into Indian territory at Migytun, walked down the Tsari chu (river) and then follow the Subansiri upstream till Taksing before re-entering into Tibet.
One can only hope that the Monkey-Fire Year will see good progresses for the road, first and foremost for the local population, but everything makes it difficult, the terrain, the weather, the rock, the environment, the government’s procedures…
It is however doubtful if the Prime Minister’s promise to collect each and every Indian village can be fulfill in this case.
Posted by Claude Arpi at 4:06 PM