China loves Tibet: an unacknowledged victory for the Dalai Lama? 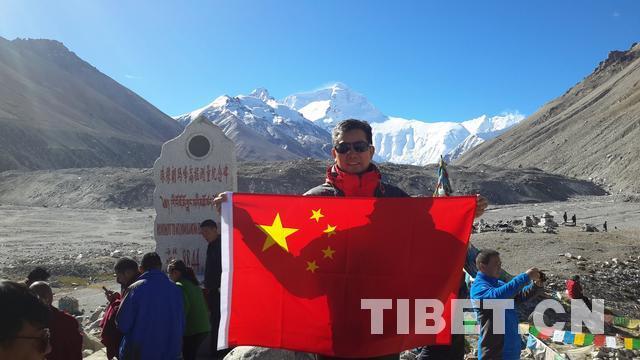 There was a time when the Chinese considered Tibet the most backward, uncultured part of the Middle Kingdom, mainly inhabited by barbarians.
This is not the case anymore and this has important implications for the Tibetan ‘freedom struggle’.
China Tibet News published today some statistics: “during the seven-day National Day holiday, Tibet received 1.03 million tourists, up 18 percent from the previous year. The visitors brought 490 million yuan (about 73.28 million U.S. dollars) in tourism revenue, a year-on-year increase of 20.7 percent.”
The website affiliated to Xinhua remarks: “Traveling to Tibet is a dream for many people. Picturesque scenery and rich human landscape in Tibet attract a large number of tourists every year. Since the beginning of 2016, thanks to the improvement of tourism service standardization, tourism service covering eating, accommodation, traffic, traveling, shopping and entertainment has been enhanced. It provides a comfortable traveling environment for tourists from both home and abroad.”
The old soldiers of the 18th Army who entered (invaded) Central Tibet in the Fall of 1951 would not believe their ears (and eyes).
China Tibet Online adds: “According to tourism authorities, in addition to traditional group tour, one-day tour in Lhasa, one-day tour in suburbs and other excursions are also very popular among tourists. Self-driving tour and cycling tour are highlights in Tibet's tourism market during the National Day holiday. Most tourists having made a travel plan ahead of time intend to enjoy the entertainment with distinctive culture and buy unique tourism products.”
Tibet a 'unique' product.

Are the figures right?
Incidentally, The Washington Post does not believe these figures. Its correspondent met with some tourism officials in Tibet who told him: “The numbers actually reflect the number of person/visits. In other words, if someone visits three places in Tibet, such as Lhasa, Shigatse and Nyingchi, they will be counted three times.”
Wang Songping, a deputy director in the Tibet Tourism Development Commission admitted that all the places that a tourist went and spent money are being counted.
Some officials explained the trick (it was later denied), they multiply the number of arrivals to Lhasa by a factor of 2.7 or 2.8, calculating ‘an average probability’ to account for the fact that most people visit two or three places.
It was how the bumper harvest was 'counted' during the Great Leap Forward, when tens of millions died of starvation.

China is crazy of Tibet
Whatever the correct number of visitors is, the fact remains that Tibet has becoming a craze for the Hans of the Mainland …and this relatively new.
This could have important implications for the future of Tibet.
According to an oped in The China Daily: “Tibetan culture has always been a dazzling pearl in the treasure trove of world civilization. Profound and extensive, it mirrors the characteristics of the ethnic groups, traces the Tibetans' pursuit of modern civilization and reflects the fact that the Tibet autonomous region is an inalienable part of Chinese territory.”
No barbarians any longer.
The Communist newspaper asks to give a definition for Tibetan culture and immediately answers: “For most, Tibetan culture can be simplified to some familiar scenarios - monasteries and temples, Buddhist monks and nuns, the Living Buddha of legendary stories and lyrical nomadic life on the pasture.”

Tibet's culture is far richer
The unnamed writer (who is said the director of the Modern Institute of China Tibetology Research Center) argues that Tibetan culture: “is far richer than that Tibetan architecture and arts such as sculpture, painting, decoration and handicrafts, as well as music, dance, drama, spoken and written language, literature in written form, folk literature, medicine and pharmacology, astronomy and the calendar have all been enriched and reached very high levels.”
The author gives a historical background: “Tibetan culture, derived from its ethnic groups and regional cultures, is both traditional and modern, religious and worldly, indigenous and exotic. It is vibrant and living, outlining the changes and development of Tibet from ancient to modern times.”
He notes: “During the reign of Songtsen Gampo in the seventh century, Buddhism was introduced to the Tubo [Tibetan] people from the Central Plain of China, India and Nepal, and gradually developed into Tibetan Buddhism with its distinctive characteristics. At the same time, the Indian and Nepalese cultures of South Asia, the Persian and Arabic cultures of West Asia and especially the Han Chinese culture of the Central Plain had considerable influence on the development of Tibetan culture.”
He admits: “For a long time, some people have turned a deaf ear to these facts and have considered Tibetan culture immutable and frozen. They have equated Tibetan Buddhism with Tibetan culture and labelled Tibet an isolated place, primitive and backward, where people live a hard, weird life. Arguably, Tibetans of different ethnicities are the creators, inheritors and developers as well as major protectors of Tibetan culture."
Could have any Tibetans dreamed that the Chinese propaganda could speak that way about Tibet a few years ago.

Follow the Party Line
Of course, the author's conclusions follow the Party line: “Tibet is an internal affair of China and foreigners should not interfere.”
My only point is that even 20 years ago, one could not have imagined such writings which are ‘normal’ today.
It is perhaps a hidden unacknowledged victory for the Dalai Lama, who, for decades, has been promoting ‘Tibetan Culture’ across the world.
Is the live of the Tibetans better?
It is another issue that needs to be looked into.
Posted by Claude Arpi at 7:42 AM