A Road to the Border in Arunachal 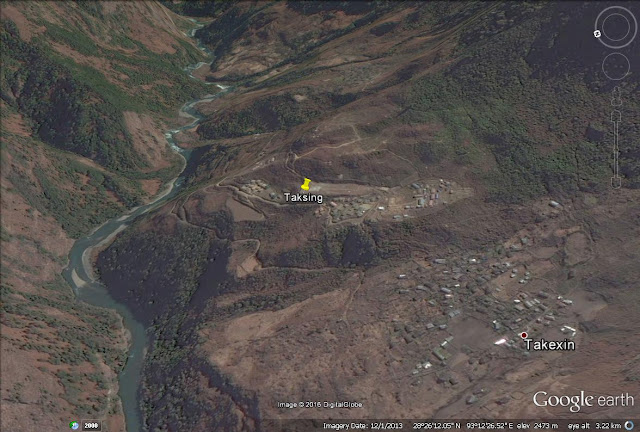 It is regrettable that the national media hardly reported an event has the most crucial strategic implications for India.
On April 6, the Border Roads Organisation (BRO) opened a new road to one of India's most remote villages, near the frontier with China (Tibet).
The Army’s engineers have managed to connect Tame Chung Chung, a remote tiny village in Upper Subanisiri district of Arunachal Pradesh to the rest of the country.
A few weeks ago, on this blog, I mentioned the Tsari pilgrimage.
The new road follows the old pilgrimage route.
The inhabitants of Tame Chung Chung village, locally known as the ‘Land of Snakes’, had dreamed of this road for decades, but like for many other ‘normal’ things, for the border populations it remained a Dream.
The BRO explains: “The area is located in an extremely remote area with rugged terrains, thick vegetation and inhospitable weather. The place has remained inaccessible since 2009.”
In fact, the road was to be opened in 2009, but ….India is not China.
The same report says: “The persistent efforts of BRO engineers have finally changed the scenario.”
The road comes under Project Arunank, run by the Army in five districts of Arunachal Pradesh: Upper Subansiri, Lower Subansiri, Kurung Kumey, Kra Daadi and Papum Pare.
The most difficult route (because of the rough terrain and hard rocks) and strategically important (because the Chinese presence nearby) was the Nacho-Tame Chung Chung section in Upper Subansiri district.
The BRO statement mentions that the village is located at the confluence of Taksing and Maja valleys: “[it] acts as a gateway to both the valleys and its connectivity was essential for further development of the area.”
The BRO admitted that a large number of personnel suffered severe injuries during the construction work and equipment worth crores of rupees was lost in landslides.

Congratulations to the 128 Road Construction Company of the 23 Border Roads Task Force (Project Arunank) for accomplishing this herculean task, …even if a bit late.

Incidentally, two years ago, I mentioned the Chinese incursions which had occurred in the remote circle of Taksing in Upper Subansiri district.
The Deccan Chronicle then reported: "After the recent Ladakh incursions, frequent intrusions by China’s People’s Liberation Army (PLA) in Arunachal Pradesh’s Taksing region have come to the notice of the security agencies. The villagers of Taksing circle in Upper Subansiri district took photographs of the PLA crossing over the Asa-Pila-Maya Army camps, which were Indian territory till 1962, but now under Chinese occupation."
The new road will hopefully help curbing the intrusions.

A 1957 report of the area
It is worth quoting a “Report on an Exploratory Tour Undertaken in the Upper Subansiri Area and the Tsari Chu Valley”.
The author is Capt L.R. Sailo of the Indian Frontier Administrative Service (IFAS).
Capt Sailo was Assistant Political Officer in Taliha of Subansiri Frontier Division (NEFA) when he undertook this tour (from January 21 to March 29 1957).
That is long ago, and all these years, the local Tagin population have been dreaming of a road, … and China was dreaming that the road will never come to be.

Here are some excerpts from Capt Sailo, the intrepid IFAS officer’s tour.
(Note that two years later, the first clash occurred in Longju near Migyitun).

ACHIEVEMENT OF THE TASKS (OF THE 1957 TOUR)
The exploratory tour has successfully achieved its given tasks as noted below:- 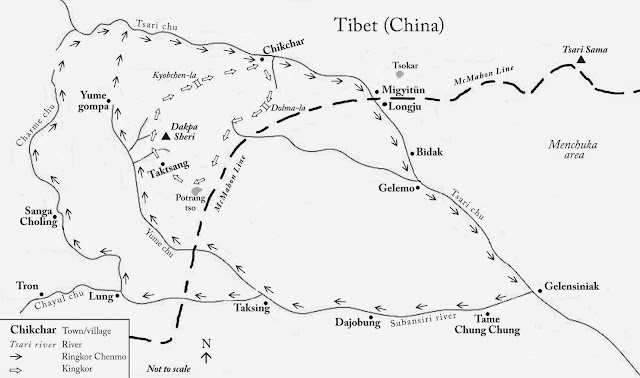 [Description of the inexistent road network in 1957]

Road communication and other Engineering problems:

The urgency and importance of constructing roads from DAPORIJO to the border settlements of Lower NA and MIGYTUN cannot be over-emphasised. In view of the more favorable nature of the country, it will be easier and more economical to open our main line of communication along the right bank of the SUBANSIRI starting from DAPORIJO right up to Lower NA settlements which is roughly 150 miles and another road on the left bank connecting TALIHA to NACHO about 48 miles.

To start with, we may aim at mule track between DAPORIJO and TALIHA and the rest porter tracks. Between DAPORIJO and LIMEKING, it will be possible to construct roads and bridges by using local man power but tools, implements and other necessary stores will have to be arranged.
For want of human habitation beyond LIMEKING on the routes to Lower NA and MIGYITUN settlements, labours will be a problem and the lower Tagins, at present will be most unwilling to operate in the higher region due to its cold climate and the difficult nature of the country. The solution may lie in posting one platoon of Assam Rifles pioneers at LIMEKING to work up to GELENSHINIAK and two sections of Agency Service Corps each at TAKSING and LONGJU to work downward to GELENSHINIAK as supply dropping can be easily done at TAKSING and LONGJU. If emergency dropping can be done at a place known as GADUBO, about 5 miles from GELENSHINIAK on the way to Lower Na, it will be very convenient and save lot of troubles in portering rations and other equipments. GADUBO locates approximately at MO 6589 and it seems to be suitable for temporary camping ground.
About 4 miles from GADUBO, there is a place known as RICHIDEN which has a route on the left bank of the SUBANSIRI connecting LANGIN on the TSARI CHU Valley, approximately 4½ miles from GELENSHINIAK. The route is followed during the DOLO pilgrimage and it might be better to align MIGYITUN trace from RICHIDEN and avoid the difficult portions between GELENSHINIAK and LANGIN.
At present we have no proper staging huts even between DAPORIJO and LIMEKING and great inconvenience is being experienced for movements in the SUBANSIRI Valley. It is essential that staging huts are provided at least on the route between DAPORIJO and LIMEKING. Along with the construction of staging camps, the question of providing camp Chowkidars should also be taken up. The following are suggested places for construction of staging huts.


LIMEKING, being only about 70 miles which can be conveniently covered in 7 marches, should now be reduced to 7 stages and the existing porterage payment of Rs. 26/- (for 13 stages) be cut down accordingly to Rs. 14/- at the rate of Rs. 2/- per load per stage.
The question of constructing staging huts on the left bank route may also be examined when we establish administrative centre on the left bank.
Apart from several rivers to be bridged along the routes, construction of reliable suspension bridges over the SUBANSIRI will be required for easy contact with the left bank at the points near DAPORIJO, TALIHA, AENGMORI, NACHO, GELENSHINIAK and LOWER NA.
Posted by Claude Arpi