Tibet: from darkness to light, from dictatorship to democracy, says Party Secretary 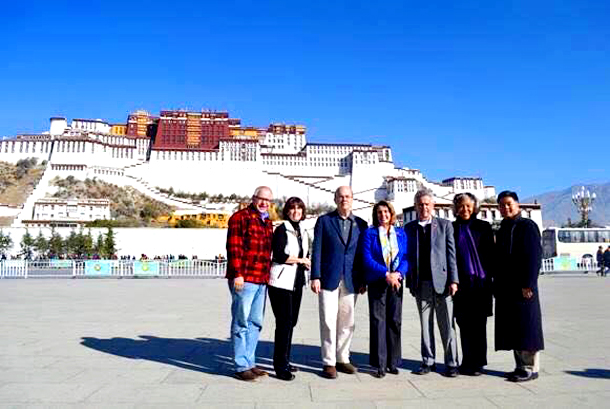 Tibet: from darkness to light, from dictatorship to democracy, from backwardness to progress, from poverty to prosperity, says Tibet’s Party Secretary to Nancy Pelosi

Nancy Pelosi, the US House of Representatives Minority Leader took the opportunity of a visit to China (which included a meeting with officials of China’s National People’s Congress), to visit Tibet with a US delegation.
The South China Morning Post reported: “Pelosi, the former House speaker, has been a frequent critic of China’s human rights record, including in the remote Himalayan region where Beijing is accused of suppressing demands for greater religious and cultural freedoms.”
When she was asked about her Tibet trip during a meeting with Zhang Ping, a vice-chairman of the Chinese parliament, her response was not clear.
Zhang queried: "Madame Pelosi you have been to Tibet. I was concerned about your health. I can see there is nothing wrong with your health. This shows your health is very good. I want to first hear your impressions of your visit to Tibet."
Pelosi just answered that she had shared some of her views on Tibet during an earlier meeting, but she made no other comments about her present visit, which had not officially been scheduled.
The main focus of her present visit to Beijing was boosting Sino-US trade ties a well as exchanges with her Chinese interlocutors on cyber security, climate change and human rights.
During a news conference Hong Lei, a Foreign Ministry spokesman, confirmed that Ms. Pelosi and her delegation had gone to Tibet before traveling to Beijing, but he did not give any detail about the Tibet trip.
Knowing her interest for Tibet, she would have been logical that she meets with Jampa Phuntsok, one of the senior most Tibet cadres and also a NPC’s vice-chairman (like Zhang Ping), but the Chinese authorities did not see it that way.
In 2008, Pelosi had declared: “If freedom-loving people throughout the world do not speak out against China’s oppression and China and Tibet, we have lost all moral authority to speak on behalf of human rights anywhere in the world.”
In Lhasa, she met with nearly the entire Standing Committee of the Tibetan Autonomous Region’s (TAR) Regional Congress led by Chen Quanguo, the Party Secretary and Pema Choling, Chairman of the local People's Congress as well as Lobsang Gyaltsen, Chairman of the TAR government and Deng Xiaogang, Deputy Secretary of the Region.
She was accompanied from Beijing by an old US-hand, Chen Guomin presently deputy secretary general of the NPC Standing Committee, who earlier served as Minister in the Chinese Embassy in Washington DC.
Chen Guomin is an old acquaintance; he had already accompanied Pelosi during her 2009 visit to China.
In Lhasa, Pelosi had time to visit the monasteries of Drepung, Ganden, Sera and Ramoche and met with representatives of the monks and nuns, said The Tibet Daily.
According to the same official publication, Chen Quanguo briefly introduced Tibet's social and economic development to his American guest.
Then Chen recited the usual banalities.
He said that since ancient times Tibet is an inalienable part of Chinese territory; he mentioned Tibet's peaceful liberation 60 years ago, under the strong leadership of the Communist Party of China.
He added that since then Tibetan people are their own masters.
He continued: “All ethnic groups in Tibet have embarked in the correct path of socialism with Chinese characteristics: from darkness to light, from dictatorship to democracy, from backwardness to progress, from poverty to prosperity, from closed to open.”
An Upanishadic sermon!
Tibet progressed in just a few decades more than in thousand years; this has brought earth-shaking changes to the region, especially since the 18th National Congress of the Communist Party of China [in November 2012], under the strong leadership of the General Secretary of the CPC Central Committee, Comrade Xi Jinping and the selfless support of the people [of China].
During these years affirmed Chen, Tibet has witnessed “the united struggle of people of all nationalities, rapid economic development with an overall social harmony stable, peoples’ solidarity, religious harmony Buddhist, continuous improvement of people's lives, and maintenance of a good ecological environment.”
The Party Secretary told Pelosi: “The Fifth Plenary Session of the Communist Party of China's 18th Congress [held in October], has prepared a beautiful blueprint [for the future]. The Sixth Work Forum on Tibet [held in September] has pointed out the right direction; it has provided great support for the Tibetan people for a better future.
Chen said that he sincerely hopes that Ms. Nancy Pelosi through her visit will further deepen her understanding of Tibet, with truth as an objective and that after her visit the prosperous and harmonious socialist new Tibet will be made known to the American public and the people of the world.
This is of course, the Chinese version of the situation in Tibet.
The reality is different, very different.
The visit will probably not change anything on the ground.
It is a pity that Nancy Pelosi could not meet any of the two Panchen Lamas recognized by the Dalai Lama (Gedhun Choekyi Nyima) and Beijing (Gyaltsen Norbu).
It would have made her trip more educative.
Posted by Claude Arpi at 10:44 AM