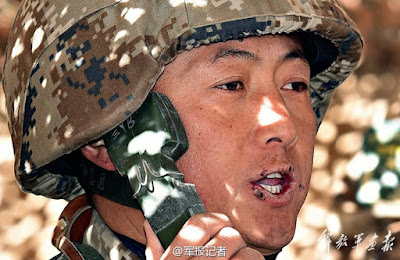 According to The China Daily, many border areas in China have deployed “an integrated frontier monitoring system consisting of advanced radars and unmanned aircraft”.
Mao Weichen, a spokesperson of the Southwestern Institute of Technology and Physics in Chengdu, told the Chinese press: “Our system has been adopted by border defense units in Xinjiang, Tibet, Yunnan and many other regions to curb illegal border crossings and drug trafficking. …Users also include some airports and military bases.”
The institute is a branch of China North Industries Group Corp, China's main manufacturer of land weapons.
Mao asserted that the new system integrates electro-optical devices, radars, communications equipment, command-and-control instruments and tools for image analysis.
The Institute in Chengdu has closely worked with border patrols, which are said to be able now to perform round-the-clock, all-weather surveillance of ‘illegal cross-border movements’.
The announcement probably addresses the Indian paramilitary personnel guarding the LAC in Ladakh and the McMahon Line in Arunachal.
It will also help China to keep a watch on the Tibetans wanting to take refuge in India via Nepal.
Mao affirmed that “people trying to cross the border will be detected by the system, which then automatically notifies the border guards.”
He added that the same system, equipped with sea-scanning radar can also be used for guarding the coasts of China.
It was explained that “Compared with traditional border monitoring networks that mainly depend on video surveillance, our system has a wider coverage and more deterrence thanks to the use of drones and acoustic weapons.”
A few weeks ago, Xinhua reported “recent years have seen a surge in China in cross-border crimes, especially illegal crossings and drug trafficking.”
Border defense units in Xinjiang, Guangdong and Heilongjiang have for several years been using frontier monitoring systems, such closed-circuit televisions which had very limited detection capabilities.
As the Ladakh/Aksai Chin border comes under of the Xinjiang Military District of Lanzhou Military Area Command, it probably means that the new system will be used (or is already used) on the Line of Actual Control (LAC).
The China Daily quoted an unnamed ‘border defense expert working in Beijing’, who said: “Given that cross-border crimes are frequent, it no longer works to depend on our soldiers to patrol and catch the bad guys on foot. Therefore the border defense authorities are turning their eyes on high-tech apparatus.”

India always behind
In the meantime, India always far behind, is trying to strengthen its borders with China, particularly in Ladakh. The Indo-Tibetan Border Police (ITBP) would like to deploy some additional 6,000 personnel along the LAC.
Today, the ITBP Force is responsible for the 3,488 km border with China from Ladakh to Arunachal Pradesh.
A government source said that the ITBP has moved a proposal for deployment of six battalions to plug the gaps along the LAC.
While the Indian side ‘moves proposals’, the Chinese acts.
With the proposal under Home Ministry's 'active' consideration, it is hoped that the ITBP may be able to raise eight additional battalions (about 8,000 personnel), which would “enable rest and recuperation of its men after working in harsh weather conditions on the icy frontier. “
The question is: why can’t the ‘sensitive’ border be guarded by the Indian Army?
Further why should an ITBP jawan spends 20 per cent on guard duties of VVIPs?
Why can't other forces provide security for the VVIPs?
Regarding the ITBP, Lt Gen J.S. Bajwa, the Editor of The Indian Defence Review has put on record some interesting points:
Lt Gen Bajwa offers some interesting suggestions, though it is doubtful if the authorities are ready to listen. He says: “place all ITBP forces deployed along the LAC under the Army for operational control.”
In the meantime: “Induction of new equipment into the Force, should as a policy, be cleared by the Army from the technical and logistic compatibility point of view.”
The crux of the problem, according to the Editor of The Indian Defence Review is: “MHA’s reluctance to place the ITBP under the Army is indicative of the underlying resistance of the IPS lobby to serve under any commander from the Army. IPS as seen from the factual ground realities considers itself as an 'administrative cadre' akin to IAS. They loathe the notion of leading from the front as field commanders.”
This may not change soon.

New cameras for the ITBP?
After writing the above post, I came across an article in The Daily Excelsior, the largest newspaper published in J&K.
It says: "Though peace prevailed between Sino-Indian troops along the LAC in Ladakh sector with both Armies holding regular interactions at Border Meeting Points (BMPs), India has decided to go ahead with installation of latest gadgetry along the LAC to monitor movement of the Chinese troops from its side."
The Ministries of Home Affairs and Defence suddenly realized the "failure of previous such system to work up to the expectations of Army and ITBP, which guards the LAC along the China border."
According to the The Excelsior "the MHA and MoD have decided to go ahead with their proposal for installation of high resolution sophisticated cameras to keep surveillance on the PLA activities on its own side."
An Army source told the Jammu-based newspaper: “The Defence experts would first work on surveillance cameras before their installation about 20 kilometers inside the Indian territory to ensure that the system doesn’t fail like the previous one, which hadn’t come up to expectations of the ITBP as it failed to gave proper and adequate view of the activities across the LAC.”
The Excelsior adds: "It was in this context especially after Despang incursions that the ITBP had decided to install sophisticated cameras to monitor movement of the PLA on the Indian side. However, this system has not worked and, therefore, the MHA and MoD have decided to go ahead with the new system of installing very high resolution surveillance cameras to ensure that they give adequate picture of the LAC, where the troops and the ITBP personnel can’t monitor or patrol regularly."
The fact remains that China is still several stages in front especially with the new drones and the newly-installed sophisticated equipments reported in The China Daily.

The Chinese are ready for any eventuality.
Have a look at these pictures of the Chinese border forces (PLA) exercising in the Kunlun Mountains, probably not far from Ladakh. 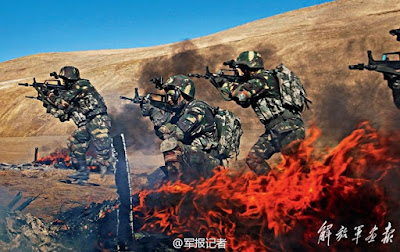 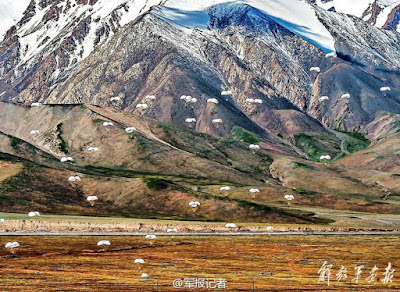 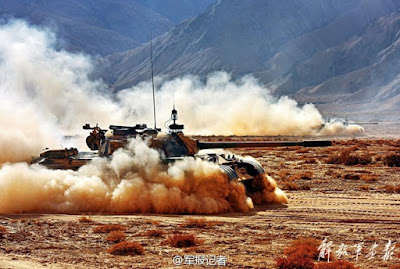 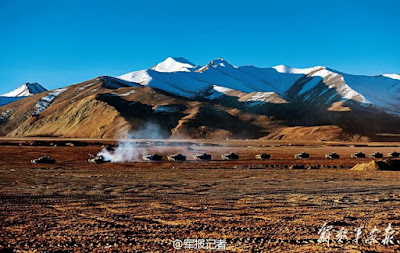 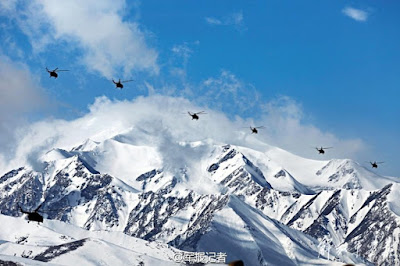 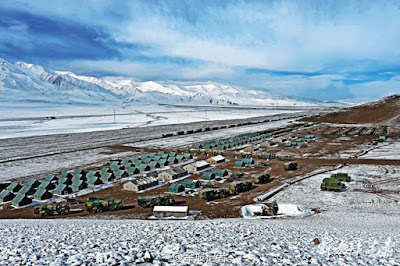 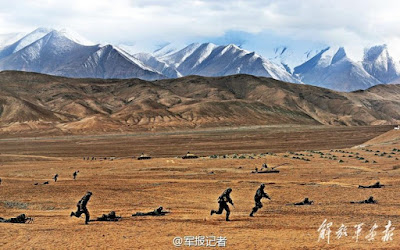 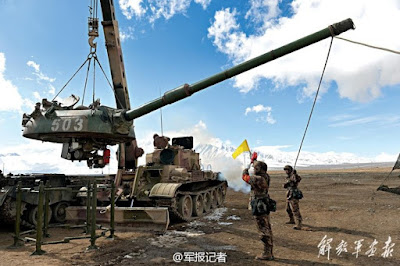 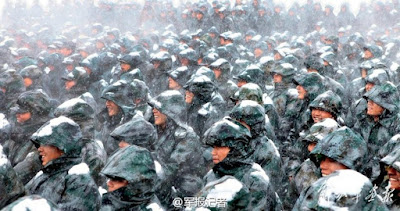 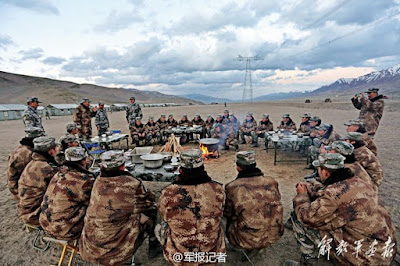 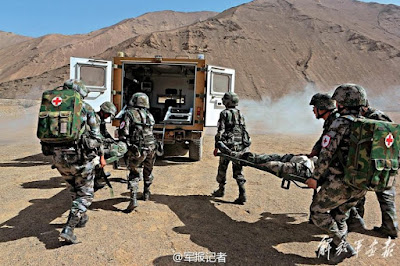 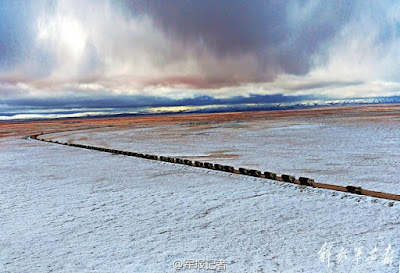 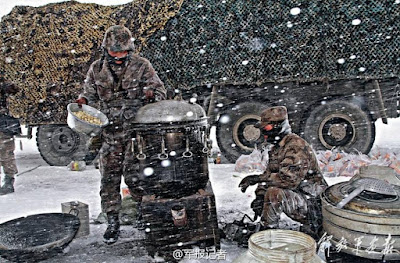 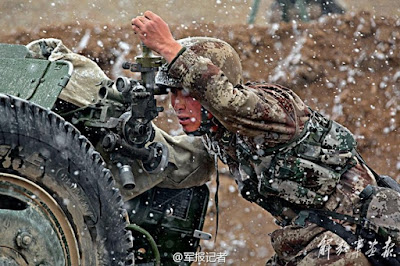