China: Betting on their Panchen Lama

The 11th 'Chinese' Panchen Lama, Gyaltsen Norbu (known in pinyin as 'Bainqen Erdini Qoigyijabu'), is back in Lhasa, in winter this time.
His arrival on the Roof of the World triggered a lot of media coverage in China.
Xinhua also announced that the Beijing-selected Panchen Lama has been elected Chairman of Tibet Development Fund, an important 'non-governmental, non-profit organization',  according to Xinhua.
Of course, the Fund is a 'non-governmental' with Chinese characteristics, in other words, fully under the Party's control.
The article quoted Gyaltsen Norbu saying that he will work hard to help develop Tibet and lift its people out of poverty.
He was apparently elected to this new position during a meeting of the Fund's Directors, obviously with the blessings of Beijing.
Xinhua noted: "The Tibet Development Fund, set up in 1987, has raised 106 million yuan (about 16.58 million U.S. dollars) for 387 projects in Tibet since 2006."
Deng Xiaogang, executive vice chairman of the TAR's government and the powerful official responsible for Tibet's security, stated that "the fund is expected to play an even greater role in promoting social and economic development in Tibet under the leadership of the 11th Panchen Lama."
Earlier, the 10th Panchen Lama and the famous Tibetan collaborator Ngabo Ngawang Jigme, had occupied the position.
A few days before Gyaltsen Norbu's arrival in Lhasa, a series of articles appeared in the Chinese media.
Gyaltsen Norbu also gave an interview, in Beijing, to China Tibet Online, a Xinhua affiliate.
Norbu spoke about 'his' generation. He said "although he had a different growth environment from the majority of the post-90s, all of them live in an era of peace and happiness, a most harmonious, stable period with prosperous development, so the post-90s are rich in innovative and pioneering spirit, which should be promoted. The post-90s should make more efforts to contribute to the country."
He also mentioned the importance of Buddhism: "To incorporate Tibetan Buddhism into socialist society, the most important thing is to let all those in the Tibetan Buddhist circle and the broad believers love the country, abide by law and adhere to disciplines. This is completely in conformity with the Tibetan Buddhism’s doctrines and also its correct development road."
Did Buddha mention the "love of the country' in the sutras?
Perhaps not!
The official media also carried 'relevant highlights' of Gyalsten Norbu's life (at least 2 photo features).
I have often written on this blog about the fake Golden Urn ritual through which he was selected as Panchen Lama in 1995.
China Tibet Online gave its own explanation: "On November 29, 1995, a grand ceremony of drawing lot from the golden urn to determine the reincarnated soul boy of the 10th Panchen Lama was held before the statue of Sakyamuni in Jokhang Temple in Lhasa. The five-year-old Gyaltsen Norbu was determined as the reincarnation of the 10th Panchen Lama. Upon the approval of the central government, he was formally enthroned at Tashilhunpo Monastery in Shigatse on December 8, 1995."
This is obviously the Chinese version of the event.
But it is also clear that, through this visit, Beijing is preparing for another 'reincarnation', the Dalai Lama's.
(Let us not forget that the boy recognized by the Dalai Lama as the 11th Panchen Lama is still under house arrest somewhere in China).
The Chinese media also recalled that on June 10, 2015, President Xi Jinping met the 11th Panchen Lama, "[a] member of the Standing Committee of the CPPCC National Committee and also vice president of the Buddhist Association of China. The Panchen Lama was also advised to advance his religious study, nurture his own virtue and expand his vision by obtaining more knowledge of modern science and culture."
As he arrived in Lhasa, Gyaltsen Norbu made the customary visit to Jokhang cathedral where he worshiped a statue of the Buddha Sakyamuni and blessed the lamas present, said Xinhua, which added:"he arrived at the Temple around 5:30 a.m. and was greeted by lamas lined up at the temple gate. He paid homage to the statues of Buddhas".
Xinhua especially mentions the status of Jowo, "Jokhang's house treasure -- a statue of Buddha Sakyamuni brought to the temple by Princess Wencheng of the Tang Dynasty in the seventh century."
Gyaltsen Norbu is also said to have prayed for harvests, prosperity and stability.
Please note 'stability'. Prayers are badly required?
But it is clear that Beijing is preparing the post-Dalai Lama's era, by positioning their Panchen Lama as the one who will select the next Dalai Lama and assume some kind of 'regency' during the minority of the Dalai Lama.
Hopefully, the future will not work according to Beijing's plans, but planning is going on full swing.

Here are some photos of the arrival of Gyalsten Norbu in Lhasa. 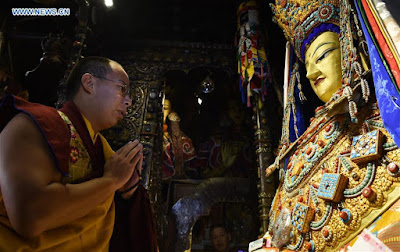 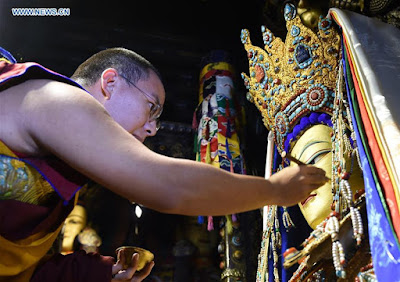 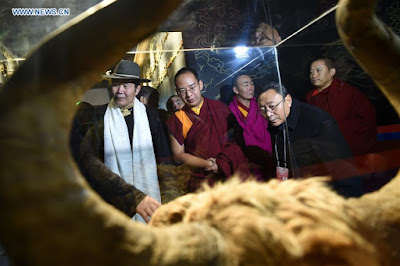 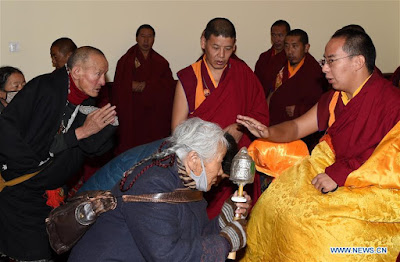 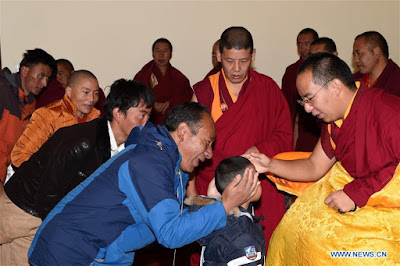