On August 17, Xinhua reported that General Fan Changlong, a member of Communist Party’s Politburo and Senior Vice Chairman of the Central Military Commission (CMC) visited Tibet and Qinghai to inspect the forces “stationed on the snow-covered plateau, the loyal soldiers defending the frontiers”.
According to Chinese media, he brought to the troops the sincere greetings of the President Xi Jinping and the Central Committee and convey their high esteem.
General Fan requested the armed forces to thoroughly study and implement President Xi’s series of important speeches about the situation in the Party (read the corruption cases against Zhou Yongkang and others ‘tigers’).
The focus of the defense forces, said General Fan, should be on fighting and be prepared to win a war. For this, they should grasp the importance of military training, the importance of improving the military capability to fulfill the mission and the tasks entrusted by the Party and the People.
General Fan Changlong pointed out that combat training is an important task for the preparation for military struggle; it is the basic starting point.
Interestingly, Chinese reports did not mention which units he visited, how long he stayed in Tibet and Qinghai, where he went; we don’t even know when his visit took place.

It however appears that he was accompanied by three Military Region Commanders (Lt. Gen. Liu Yuejun, commander of the Lanzhou Military Region, Lt. Gen.Zhao Zongqi, Commander, Jinan Military Region and General Li Shiming, Commander, Chengdu Military Region).
What was doing Lt. Gen. Zhao Zongqi around is not clear, though having been posted for some 20 years in Tibetan Military District, he certainly knows the ground.
The main purpose of general Fan's Tibet tour was most likely to convince the PLA officers that they should follow Xi Jinping in his crusade against corrupt officers.
Xinhua reported that General Fan told the army to firmly obey the command of President Xi Jinping and the Communist Party of China (CPC) Central Committee.
China's senior-most general told the troops that “the army and the armed police should resolutely implement the strategies made by the CPC Central Committee and Xi, also the CMC Chairman, and uphold the correct decisions to investigate Zhou Yongkang and punish Xu Caihou.”
General Xu Caihou, a former vice chairman of the CMC (like Fan) was expelled from the CPC for suspected bribery in June. He is the senior most officer to have been ‘expelled’ in the history of the PLA.
To follow the orders of Chairman Xi was important, said Fan; the defence forces should implement the instructions by achieving ‘Four [questions] to Ask’.
What are these ‘Four to Ask’? It is not very clear, as often when written in Communist jargon, but according to the Chinese media: 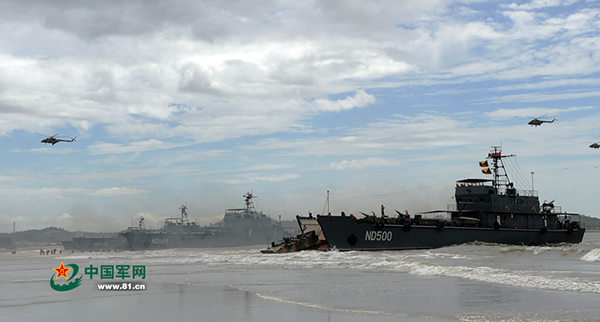 In the recent months, the Central Military Commission has been insisting on the importance of ‘training’.
For example, China Military Online yesterday announced a free air-combat confrontation drill between an aviation detachment equipped with several fighters belonging to the East China Sea Fleet of the Chinese People's Liberation Army Navy (PLAN) and a troop unit under the PLA Air Force (PLAAF). The announcement says that it is a first in the history of the PLAN and the PLAAF: “The free air-combat confrontation drill will be conducted on the one-to-one and two-to-two basis respectively among the two sides' third-generation fighters. The drill will focus on studying how to deepen the joint operations and improve the joint-combat capability by carrying out the air-combat confrontation.”
It probably means that in the past, the PLA, PLAN and PLAAF had forgotten to prepare themselves for war as they had been engaged in more lucrative activities. President Xi seems determine to change this.
The question remains, why to make this announcement in Tibet?
Does it mean that many corrupt officers are posted on the high plateau?
Probably, otherwise how to interpret this semi-clandestine visit of General Fan Changlong in Tibet.
Posted by Claude Arpi at 6:36 AM