Tourism and Environment on the Tibetan plateau 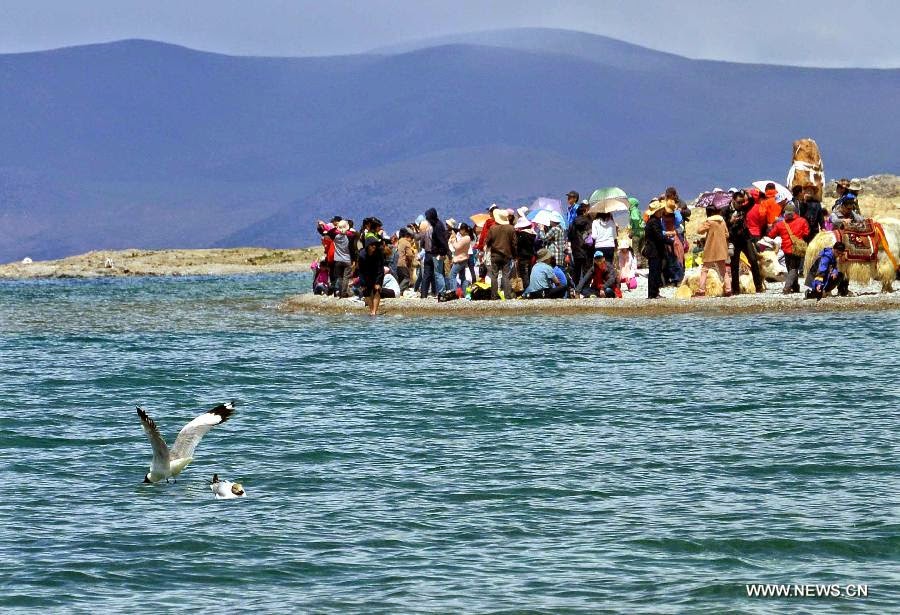 The magazine Nature (No 512, p. 240–241) publishes a fascinating article about the ecology of the Tibetan plateau. It quotes a report just released by the Chinese Academy of Science.
The authors of the report should have added another factor: the 15 million mainland tourists yearly pouring onto the Tibetan Autonomous Region.
For centuries, Tibet has been the most isolated country on the planet. A few brave explorers managed to sneak in, most of the times illegally, on the Roof of the World. But things are changing, changing very fast.
Today, Chinanews.com thus describes Tibet: “Tibet with its mystery is the spiritual Garden of Eden and is longed by travelers home and abroad. Only by stepping on the snowy plateau, can one be baptized by its splendor, culture, folklore, life, snow-mountains, saint-mountains, sacred lakes, residences with local characteristics and charming landscape ”.
Tibet is fast becoming the largest entertainment park in the world; thousand times larger than Disneyland. 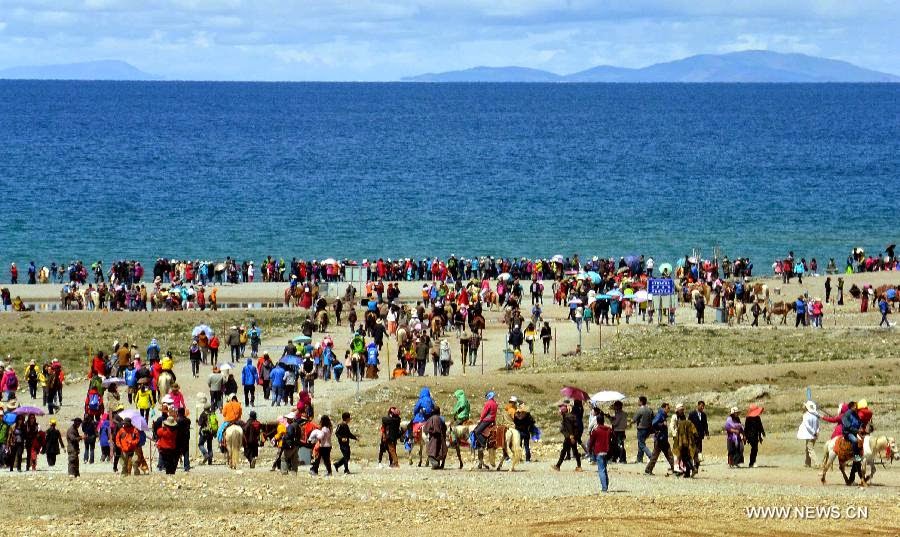 The government in Beijing has decided to market the Land of Snows as the ultimate ‘indigenous’ spot for the Chinese people to spend their holidays; in one way, it has become Tibet’s USP (Unique Selling Proposition).
Tibet has two unique assets: first, its physical reality. The beauty of the landscape, the imposing mountain ranges, the purity of the air and the rivers, the dry blue sky (especially when compared to the dusty sky of China’s great metropolis); Tibet is indeed the ideal place to visit and have a break from the fast pace of the polluted mainland of China.
The second advantage is the rich historical past of the Roof of the World, the Land of the Lamas. In Tibet, you can find everything, says the Chinese propaganda: a beautiful Chinese princess falling for the powerful emperor and converting him to Buddhism; the monasteries and nunneries, seat of a wisdom lost in the mainland; the folkloric yak or snow-lion dances; the Shoton (yoghurt) festival; the beautiful colourful handicrafts; the exotic food, you name it, …and a couple of millions of Tibetans (in the TAR) who can guide you through the mega-museum. 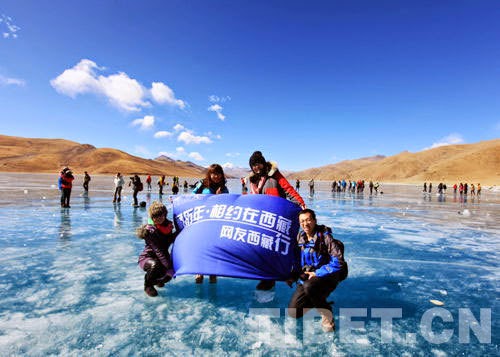 Of course, the ‘locals’ are not always reliable and their knowledge of Mandarin is often not that good; in any case, the show can go on without them.
When 15 millions of ‘tourists’ pour into a relatively small place like the Tibetan Autonomous Region, one has to be ready to ‘welcome’ them and provide them ‘entertainment’.  This is adding to the pressure on the environment.
The time has come to start a debate and more importantly, initiate serious and honest researches on the pros- and the cons- of mass tourism in an environmentally fragile region.
But it is still a touchy subject, because tourism is a great source of revenue for a poor mountainous region.


Double threat for Tibet
Climate change and human development are jeopardizing the plateau’s fragile environment.
Nature
Jane Qui
No. 512, p. 240–241
August 19, 2014
Hot, dry weather and progressive urbanization are turning grasslands into sand near the headwaters of the Yellow, Yangtze and Mekong rivers.
A comprehensive environmental assessment of the Plateau of Tibet has found that the region is getting hotter, wetter and more polluted, threatening its fragile ecosystems and those who rely on them.
The plateau and its surrounding mountains cover 5 million square kilo­metres and hold the largest stock of ice outside the Arctic and Antarctic; the region is thus often referred to as the Third Pole. And like the actual poles, it is increasingly feeling the effects of climate change, but rapid development is putting it doubly at risk, the report says.
Released in Lhasa on 9 August by the Chinese Academy of Sciences (CAS) and the government of Tibet, the assessment aimed to address gaps in knowledge about the extent of the problems the 4,500-metre-high plateau faces. It finds that precipitation has risen by 12% since 1960, and temperatures have soared by 0.4 °C per decade — twice the global average.
In addition, glaciers are shrinking rapidly and one-tenth of the permafrost has thawed in the past decade alone. This means that the number of lakes has grown by 14% since 1970, and more than 80% of them have expanded since, devastating surrounding pastures and communities.
The plateau feeds Asia’s biggest rivers (see ‘Running wild’), so these problems are likely to affect billions of people, the report says. Pollution from human and industrial waste as a result of rapid development is also a serious risk.
But the assessment also suggests ways to combat the problems, calling on the Chinese and Tibetan governments to make conservation and environmental protection top priorities. It will help in the design of “policies for mitigating climate change and striking a balance between development and conservation”, says Meng Deli, Tibet’s vice-chairman.
Expand
“The Tibetan plateau is getting warmer and wetter,” says Yao Tandong, director of the CAS Institute of Tibetan Plateau Research in Beijing, who led the assessment. This means that vegetation is expanding to higher elevations and farther north, and growing seasons are getting longer. But some areas, such as the headwater region of Asia’s biggest rivers, have become warmer and drier and are being severely affected by desertification and grassland and wetland degradation.
Human activity, too, is on the rise. The population of the plateau reached 8.8 million in 2012, about three times higher than in 1951. And the number of livestock has more than doubled, putting more strain on grasslands.
Multiple menaces
Growing urbanization is creating more waste than the region can handle. Tibet has the capacity to treat 256,000 tonnes of domestic solid waste a year, less than the amount generated by its two largest cities, Lhasa and Shigatse. “You see a lot of rubbish lying around the plateau, including headwater regions,” says Kang Shichang, a glaciologist at the CAS Institute of Cold and Arid Regions Environmental and Engineering Research Institute in Lanzhou. “It’s an environmental menace.”
A bigger threat comes from mining. According to the assessment, Tibetan mines produced 100 million tonnes of wastewater in 2007 and 18.8 million tonnes of solid waste in 2009. Because most of the mines are open pits and have limited environmental oversight, “air, water and soil pollution is particularly serious”, says the report. Officials release few details about actual pollution levels.
Pollution is coming not just from local sources. Dust, black carbon, heavy metals and other toxic compounds are being blown in from Africa, Europe and southern Asia. The dust and carbon residues are darkening glaciers, making them more susceptible to melting, and the toxic chemicals are poisoning crops, livestock and wildlife.
But the threats from mining and pollution are dwarfed by the potential repercussions of changes in ice and vegetation cover, the assessment says. Different surfaces — snow, grassland, desert — reflect and absorb different amounts of solar radiation, affecting how the air above them is heated. This means that changes in coverage are likely to affect the onset and strength of Asian monsoons. It also has important ramifications for the livelihood of downstream river communities because the glaciers, permafrost and ecosystems act as a giant sponge, helping to control the release of water and prevent floods. “The significance of the assessment goes beyond national borders,” says David Molden, head of the International Centre for Integrated Mountain Development in Kathmandu.
Temperatures in the plateau are projected to rise by between 1.7 °C and 4.6 °C by the end of 2100 compared with the 1996–2005 average, based on the best- and worst-case global-emissions scenarios. So as urbanization and climate change tighten their grip, researchers worry that unbridled development will devastate the plateau’s environment. To protect it, the report says, the central government must evaluate local officials on the basis of their environmental, not just economic, achievements. It must also invest more in ecological compensation, for example by paying herders more to cut their livestock numbers. Moreover, it must be much more open about pollution incidents.
“Tibet will be a test case of how seriously China takes ecological protection,” says Yao. “Safeguarding the plateau environment is crucial not only for sustainable development of the region, but also to social stability and international relations.”
Posted by Claude Arpi at 4:45 AM