The dual use of airports in Tibet 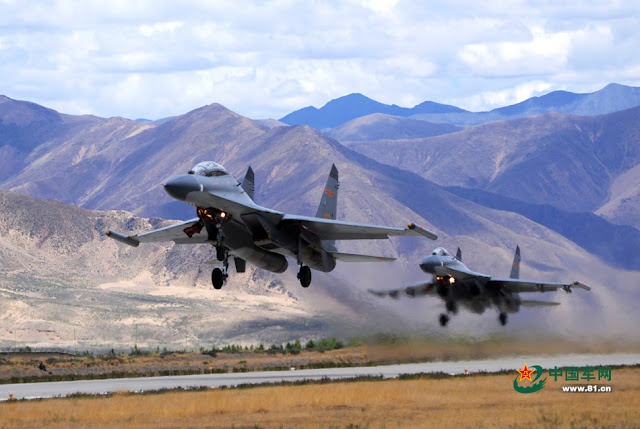 This is an update of a two-year old post about the airports in Tibet.
I have often mentioned on this blog the dual-use of the airports on the plateau.
Yesterday, Xinhua announced the integration of civil-military airports to "strengthen aviation safety and combat support capabilities."
A joint statement from the People Liberation Army Air Force (PLAAF) and General Administration of Civil Aviation (CAAC) said that the integration will include joint maintenance of airport support facilities, joint flight safety support and joint airport management.
Interestingly the Lhasa Gongkar Airport in Tibet and Sunan Shuofang International Airport in  Wuxi in Jiangsu province, will be the first two pilot PLA/civil airports to implement the 'integration'.
It will be done during the second half of 2015.
The PLAAF/CAAC circular further affirms that "All the civil-military airports will conduct strengthened integration next year."
Is this decision linked with the 6th Tibet Work Forum?
Probably!
Apparently, the first meeting of the Forum took place yesterday.
Xinhua reported that top Chinese leaders have met "to discuss economic and social development in Tibet, and how to ensure the autonomous region achieve prolonged stability."
The statement of the Political Bureau of the Central Committee of the Communist Party of China (CPC) further noted: "Safeguarding national unity and strengthening ethnic unity should be highlighted in work involving Tibet."
It added that: "Efforts should be made to unswervingly carry out the anti-separatism battle, promote the region's economic and social development, safeguard and improve people's welfare, and enhance exchanges and integration of different ethnic groups."
The Politburo (or probably an extended Politburo) is said to have agreed that "strengthening Tibetan infrastructure, helping it foster competitive industries while ensuring environmental protection are the means to achieve marked improvement in living conditions and more social cohesion," were the priorities for the restive region.
The PLA/Civil integration of the airports in Tibet will probably help Beijing to 'strengthen the infrastructure' and consolidate its presence on the Plateau, i.e. 'to stabilize Tibet' in Marxist terminology. 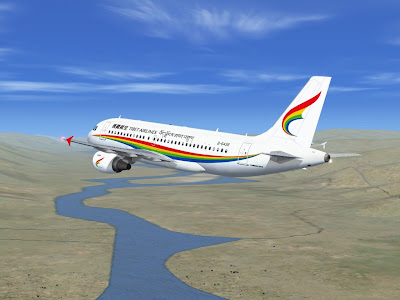 (Here starts my old post)
To flood the Tibetan plateau with more and more Chinese tourists, a good infrastructure is required.
Airports and the railway line are the backbones of a booming tourism in Tibet. China is working hard to get the latest facilities in these fields.
Xinhua recently reported that the airport in Chamdo (known as the Bangda Airport) is to be reopened soon after major repairs.
Xinhua says: "The Bangda Airport, the world's highest-altitude civilian airport currently in use, is expected to resume operations after months of repairs, local aviation authorities said."
The Chamdo airfield was closed on June 22 to 'repair' the 19-year-old runway.
The airport operates two flights, one is Chamdo-Lhasa and the other Chamdo-Chengdu, capital of Sichuan Province. With an elevation of 4,334 meters above sea level, it is still the highest in Tibet.
The 4,411-metre-high Kardze Daocheng Yading airport, being built in Kardze (Garze) in Sichuan province will become the world’s highest civilian airport when put into operation later this year (a year earlier than planned!!).
The Civil Aviation Administration's officials say that its main purpose is to boost local tourism.
The Yading airport will cost of 1.5 billion yuan ($ 245 million). The Sichuan authorities plan to bring one million tourists (and get 1.5 billion yuan revenue!) by 2015. A quick return on investment!
But as important as tourism, the airport will facilitate the transportation of fresh troops from the Military Area Command in Chengdu to Kardze prefecture in a short time. It has been one of the most restive areas on the Tibetan plateau.
The new Kardze Yading airport will greatly facilitate the transportation of PAP's reinforcements in case of unrest. With one stone, two birds are killed: the Tibetan protesters are 'pacified' and the deluge of Chinese tourists brings hefty revenues.
Has anybody thought of doing something similar in Chushul in Ladakh, of course not to 'pacify' anybody but to bring some revenue for the region and 'occupy' India's territory?
By the way, an article by Virendra Sahai Verma and P. Wangdus appeared in The Hindu last month. It suggested a railway line in Ladakh: "A rail link in the Indus Plains in Ladakh, similar to the Kashmir Railway, will have spin-offs for environment conservation, military logistics, tourism and the local economy."
It explains: "After the Banihal-Baramulla railway, the Indian Railways should now plan to build a line in the plains of Ladakh along the Indus river. Its alignment could be from Batalik-Khalatse-Leh-Karu to Chushul. The stretch, of approximately 500 kilometres, is plain, interspersed with populated and fertile regions and is along an arterial road in Ladakh, from Batalik to Chushul."
Why not?

Other airports in Tibet 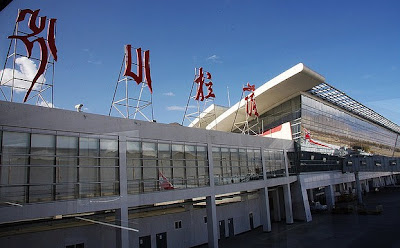 Lhasa Gongkar
Lhasa Gonggar Airport (Chinese: 拉萨贡嘎机场, Tibetan: ལྷ་ས་གོང་དཀར་རྫོང་) (IATA: LXA, ICAO: ZULS) is the airport serving Lhasa, the capital city of the Tibet Autonomous Region, China. It is located about 62 kilometres (39 mi) southwest of the city in Gonggar County of Shannan Prefecture. The airport is close to the road to Tsetang, the capital of Shannan Prefecture.
At an elevation of 3,570 metres (11,710 ft), Lhasa Airport is one of the highest airports in the world. The airport was built in 1965, a second runway was built in 1994 and terminal facilities were upgraded in 2004.

Nyingtri Mainling Airport
Nyingchi [Nyingtri] Mainling Airport (Tib: Nyingtri, simplified Chinese: 林芝米林机场; traditional Chinese: 林芝米林機場; pinyin: Línzhī Mǐlín Jīchǎng) (IATA: LZY, ICAO: ZUNZ) is an airport in Mainling, Nyingchi Prefecture, Tibet Autonomous Region, China. It is suggested to be one of the most challenging instrument approaches in the world, since the airport is in a winding valley.
Nyingchi Airport is the third airport that Tibet has put into operation. Built at a cost of 780 million yuan (96.18 million U.S. dollars), including investment by the General Administration of Civil Aviation of China (CAAC), the airport is 2,949 meters above sea level, lower than the other two civil airports, with a designed annual passenger flow of 120,000.

Chamdo Bamda Airport
Qamdo [Chamdo] Bamda Airport (IATA: BPX, ICAO: ZUBD), also known as Changdu Bangda Airport, located in Bamda, Chamdo, Tibet, China.
The airport is the highest airport in the world, at an elevation of 4,334 metres (14,219 ft) and has the longest publicly used paved runway in the world, at 5.5 km (3 mi).
The low air density at this altitude makes a higher takeoff and landing true airspeed necessary, and therefore a longer runway. Also, the aircraft's engines produce less thrust at higher elevation than near sea-level.
The airport is 2.5 hours by mountain road from the county seat of Chamdo. The long commute is the result of no flat land closer to the city being available to construct an airport.
Visitors are warned before landing to move slowly on leaving the plane and that they may feel light headed or dizzy because of the thin air.


Shigatse Peace Airport
Shigatse Peace Airport (IATA: RKZ, ICAO: ZURK), or Shigatse Air Base, is a dual-use military and civilian airport serving Shigatse, the second largest city in Tibet Autonomous Region, China. It is located in Jiangdang Township, 43 kilometers from Shigatse. With an elevation of 3,782 metres (12,408 ft), it is one of the highest airports in the world.
Construction of Shigatse Airport started in 1968 and was completed in 1973. It was solely for military use until 2010, when a 532 million yuan expansion was completed. On 30 October 2010, the airport was opened as the fifth civilian airport in Tibet.

Nagchu Dagring Airport
Nagqu [Nagchu] Dagring Airport (Chinese: 那曲达仁机场; pinyin: Nàqū dárén jīchǎng) is an airport under construction near Nagchu in the Nagchu Prefecture of Tibet. When completed in 2014 it will be the highest airport in the world at 4,436 m (14,554 ft), surpassing Chamdo Bangda Airport as the highest. Construction began in 2011 and is scheduled to take three years. The airport is part of a Chinese government development scheme to build 97 airports across China by 2020. By then, the authorities intend that four-fifths of China's population will be within a 90-minute drive of an airport.
Posted by Claude Arpi at 7:03 AM