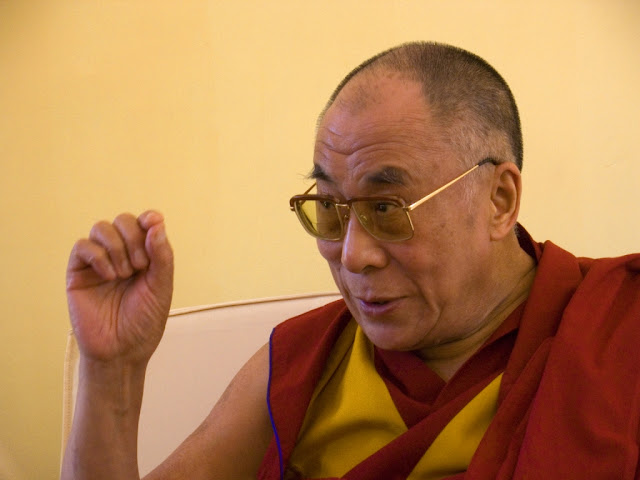 As Tenzin Gyatso, the Fourteenth Dalai Lama celebrates his 80th Birthday today, let us come back on his Three Commitments and Three Choices he made in his life.


The Dalai Lama’s Three Commitments
The Dalai Lama has 3 commitments in life.
The first one is the promotion of human values such as compassion, forgiveness, tolerance, contentment and self-discipline. He often speaks of ‘secular ethics’. For the past 2 decades, wherever he travels, he shares these human values. One remarkable fact about the Dalai Lama is that he is able to place ‘humanity’ before his own self, before his own community and even his own nation.
For his second commitment is not Tibet, he wants to work for the promotion of religious harmony and understanding among the world’s major religious traditions. Are there many religious leaders in today’s world who are ready to admit: ‘several truths, several religions are necessary?’
His country is only his third commitment (he always insists on this order); he says: “as a Tibetan [who] carries the name of the ‘Dalai Lama’, Tibetans place their trust in me. Therefore, [my] third commitment is to the Tibetan issue.” It is however true that for the past 50 years, the Tibetan issue, though a cause célèbre, has not progressed much.
Apart from these 3 commitments, the 14th Dalai Lama will go down in history for three bold, one could say visionary, choices he has made for Tibet.

His first gift to the Tibetan Nation: Democracy
Following the Tibetan Uprising of March 1959, the Dalai Lama secretly left Lhasa and took the direction of India. He crossed the border at Khenzimane, north of Tawang on March 30, 1959.
During the following months, some 80,000 Tibetans joined him and settled in India, Nepal and Bhutan.
On April 29, 1959 from the hill station of Mussoorie, the Dalai Lama formed a Tibetan Government-in-Exile, also known as the Central Tibetan Administration (CTA); a year later the CTA moved to Dharamsala, where it is still located.
The process of democratization then started. What he couldn’t do during the 9 preceding years in Tibet due to Chinese objection, the Dalai Lama could now work on: insufflating modern democratic practices into the old theocracy; the Tibetan leader did not want to be the last word for each and every political decision. As a first step, on September 2, 1960, the Tibetan parliament-in-exile, then called ‘Commission of Tibetan People’s Deputies’, came into being.
On 10 March 1961, the Dalai Lama formulated a draft Constitution of Tibet, incorporating traditional Tibetan values and modern democratic norms. Two years later, it was promulgated as the Tibetan Constitution-in-Exile.
The process continued during the following years; in 1990, the Tibetan Parliament was empowered to elect the Kashag or the Council of Ministers, and was made answerable to the Parliament. A Supreme Justice Commission was also instituted.
The newly-empowered Parliament soon drafted a new Constitution, known as the Charter of the Tibetans in Exile. Today, the CTA functions as any democratic government. This fact deeply irritates China, which is still governed by a one-Party system.
The Tibetan Charter adheres to the Universal Declaration of Human Rights and provides equal rights for all, without discrimination on the basis of sex, religion, race, language and social origin. It also defines the role of the three organs of the government: judiciary, legislature and executive as well as the statuary bodies, namely the Election Commission, the Public Service Commission and the Office of the Auditor General.
In March 2011, the Dalai Lama renounced temporal power and handed it over to an elected leader.
What is remarkable through this process is that the Dalai Lama has had to fight to ‘impose’ these democratic institutions on the Tibetan ‘masses’, who often thought that “the Dalai Lama is wiser, why do we need a human governance, when we have a divine one?”
But it shows the wisdom and the vision of the Tibetan leader, who knows that in the long run, democracy is a more stable system.

Stopping divisive sectarian practices
A not-too-well known choice that the Dalai Lama made was to stop the cult of Dorje Shugden. You may have seen pictures of vociferous and excited groups of Westerners, dressed in Tibetan monks, shouting slogans against the Dalai Lama, wherever he goes in Europe or America (and more recently in Australia). People often ask, but who are they? They are the followers of an old Tibetan spirit called Dorje Shugden, who worked for the supremacy of the Dalai Lama’s Yellow Sect over other schools of Tibetan Buddhism.
The Dalai Lama has always professed that the 4 Buddhist schools in Tibet and the indigenous Bon faith should be treated at par.
It was a courageous choice, because some conservative forces believed that the supremacy of the Yellow Sect should continue.
There is another interesting aspect to the issue.
Who is behind these well-organized sectarian groups?
It is necessary to go to Tibet to understand.
The Dungkar Monastery is located some 13 kilometers north of Yatung, where the Kailash yatris recently spent a night. Last year, Xinhua reported: “In June 2014, with the support of the local government, 7.9 million yuan was allocated to repairing the monastery.” In other words, the monastery has been rebuilt by the Chinese government. Interestingly, the Dungkar monastery has traditionally been a center for the Dorje Shugden cult in Shigatse Prefecture.
But Dungkar is not the only monastery to have been ‘renovated’. Last month, the Chinese-selected Panchen Lama (Gyalsten Norbu) spent time at the Ganden Sumtsenling Monastery in Gyalthang (Shangrila), the largest Tibetan-Buddhist temple in Yunnan. The monastery has also been restored with government’s funds; here too, it is closely associated with the Shugden practice. But that is not all.
Last year, the Lhasa government announced that the ‘maintenance’ of the Chamdo Jampaling Monastery, which had received some 90 million yuan (14 million U.S. dollars), was nearly completed. Xinhua then explained: “It is one of the key projects in Tibet during the 12th Five-Year Plan.” And guess what? It has been the main centers for the Shudgen cult in the Chamdo Prefecture of the TAR.
Obviously, Shugden centers have some sort of priority for funds allocations under the Chinese Five-Year Plan.
Many believe that the demonstrations by Western monks are also sponsored by Beijing. It is difficult to prove, but it needed courage on the part of the Dalai Lama to renounce the supremacy of his own sect. Here too, Beijing does not appreciate the fact.

The Last Dalai Lama
A third important choice was his decision to terminate the lineage of the Dalai Lamas.
In December 2014, the Buddhist leader told the BBC that it “would be better that the centuries-old tradition [of having a Dalai Lama] ceased at the time of a popular Dalai Lama.”
The present Dalai Lama knows that the rule of the Dalai Lamas over Tibet, is a flawed system of governance for a modern State. In the past, it has failed Tibet for several reasons.
First, one is never sure that the choice of a new reincarnated lama is the right one. During some troubled periods of Tibetan history, the Mongols or the Manchu dynasty did use their influence for imposing ‘their’ choice.
Then, there is a gap of 20 odd years, between the death of a Lama and the time when his reincarnation is able to take over the job; during the interregnum, the Tibetan nation was often left without governance.
Should the system continue, it is certain that there will be 2 Dalai Lamas a few years after the death of the present hierarch: one enthroned by the Party in Beijing and one recognized by the Tibetans. The temptation will be too strong for the political leadership in Beijing not to choose ‘their’ candidate. But it needed guts to take this decision.
The 3 choices made by the Dalai Lama during his life in exile will help Tibet to become a truly modern nation in the future. Not surprisingly, these choices are not acceptable to China.
Posted by Claude Arpi at 7:03 AM