Wen, Xi and the Panchen Lamas 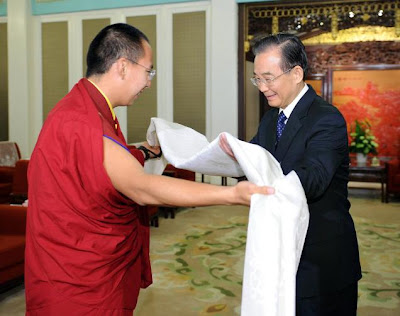 Last week, Premier Wen Jiabao officially received the Beijing-chosen Panchen Lama.
This is something which can only add oil on the fire.
The monk called 'the Fake Panchen Lama' by the Tibetans-in-exile was received by the Chinese Premier in Zhongnanhai.
Xinhua reported: "Wen praised and congratulated the Panchen Lama on his marked progress in Buddhist research and cultural and ethic aspects, noting that the Panchen Lama has behaved in a good style as a Living Buddha of the Tibetan Buddhism."
In the present circumstances, one understands the meaning of 'behave in a good style'.
Let us not forget the 'real' Panchen Lama, selected by a group of Senior Lamas from the Tashi Lhunpo monastery in the early 1990's and later recognized by the Dalai Lama is languishing in house arrest somewhere in China for the past 17 years.
Would Beijing be really interested to solve the Tibetan problem, Gedun Choeki Nyima would be freed or let go in India in exile? It could be a first gesture of good-will.
What message Mr Wen is trying to convey by receiving one person who symbolizes one of the worse aspects of Beijing's Tibet policy: the recognition of the reincarnated Lamas.

Incidentally, it is Xi Zongxun, the father of Vice-President Xi Jinping who wrote the obituary of the previous Panchen Lama in the People's Daily.
Senior Xi praised the Panchen Lama who had just passed away in strange circumstances (see my posting Hu's Karmic connection).
The article, entitled Xi: deep loyalty to the Chinese Communist Party friends miss Panchen Lama —Deeply Cherish the Memory of the Panchen Lama, a Loyal and Faithful Friend of the Chinese Communist Party, appeared in the People's Daily on 20 February 1989.
Strange Karmic connections, would say Tibetan Lamas!

Chinese Premier Wen meets Panchen Lama
2012-02-11
Xinhua
Premier Wen Jiabao on Friday had a meeting with the 11th Panchen Lama Bainqen Erdini Qoigyijabu, at the Zhongnanhai compound in central Beijing, which is the office complex for both the Central Committee of the Communist Party of China (CPC) and the State Council.
During the meeting, Wen, who is also a member of the Standing Committee of the CPC Central Committee's Political Bureau, congratulated the Panchen Lama, as well as all Tibetan compatriots, on the forthcoming Tibetan New Year, which falls on February 22.
The premiere heard a report by the Panchen Lama on his life and work since he was enthroned 17 years ago. Wen praised and congratulated the Panchen Lama on his marked progress in Buddhist research and cultural and ethic aspects, noting that the Panchen Lama has behaved in a good style as a Living Buddha of the Tibetan Buddhism.
The year 2011 is the 60th anniversary of the Peaceful Liberation of Tibet, and over the past six decades, Tibet has experienced enormous changes thanks to the leadership of the Party and the government, the assistance by the people of all nationalities, and hard work and continuous efforts made by the people of Tibet from different ethnic groups, Wen said.
Talking to the Panchen Lama, the premier pledged that in the future the regional ethnic autonomy will continue, while greater efforts will be made to improve the lives of Tibetan compatriots, protect the environment and the region's cultural traditions, as well as the religious freedom of the Tibetan people.
Wen asked the Panchen Lama to further deepen his research of academic works on Buddhist doctrines in an effort to ascertain positive thoughts from Tibetan Buddhist doctrines, so as to lead the Buddhists lamas and followers in loving the country, abiding by laws and abiding by Buddhism commandments.
He also called on the Panchen Lama to play an even greater and more positive role in safeguarding the national unification and unity of all ethnic groups.
Present at the meeting was Du Qinglin, a vice chairman of the National Committee of the Chinese People's Political Consultative Conference (CPPCC) and director of the United Front Work Department of the CPC Central Committee.