China preaches non-violence ...to others 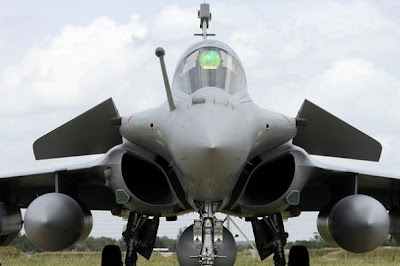 The Chinese are apparently unhappy with the selection of the  multipurpose combat plane Rafale for the Indian Air Force.
It is what appears from an article in the People's Daily (French edition only); my rough translation is posted below.
One of the arguments used by the People's Daily is that India and France are supposed to be non-violent countries.
The article affirms: "During the twentieth century in France there was a great writer called Romain Roland (1866 - 1944), Nobel Laureate for Literature, which was strongly opposed to the war. In India, there has been an illustrious politician named Mohandas Karamchand Gandhi (1869 - 1948) who was a pacifist leader, known worldwide for his fights against violence. At present, their homelands are engaged in a sinister and repulsive arm race, which shakes and profoundly changes the international scene. If by chance these two great and illustrious men were still alive, what would they feel about this selfish and pernicious transaction and what opinion would they give in this matter?"
This reminds me of a funny anecdote told by A.P. Venkateshwaran, the former Foreign Secretary of India who was posted in the early 80’s as Indian Ambassador in Beijing.
The story shows that the pacifist approach adopted by the Indian leaders at that time was never understood by the Chinese.
The story goes like this: one day, Ambassador Venkateshwaran was requested by the Politburo of the Central Committee of the Party for a subtitled copy of the movie ‘Gandhi.’ It was loaned by the Embassy for a private screening for the Party leadership and when the Chinese official returned the copy to the Embassy, the Ambassador politely asked him how it was received by the Central leadership. The official thanked the Government of India for its generosity and “replied enigmatically that it was a splendid and moving account of Gandhi’s life. But no one had been able to understand what his non-violence is about!”
This incident occurred in the 80’s, when the Chinese leadership was led by Deng Xiaoping, already ‘soft’ leader compared to his old comrades of the Long March such as Mao or the dreadful Gang of Four. One can imagine the reaction of old revolutionary leaders in the 50’s when Nehru preached non-violence to them.
It is amusing that the mouthpiece of the Party today quotes Gandhi in connection with the Rafale deal.
The People's Daily article also says that that the sale of the Rafale "encourages, excites and spurs India’s appetite and ambition to become a great military power while intensifying its aggressive and expansionist tendencies, which poses a serious threat to peace and stability in Asia".
Well, does India has a choice, considering the frantic speed of development of the PLA, PLAF and PLAN?