They wore Tibetan dresses, carried tsampa and incense and prayed 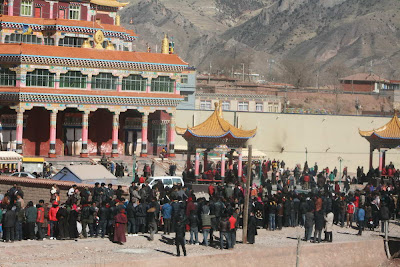 China is a powerful country, the second economic power of the planet, just behind the United States of America.
But China is trembling. Why?
Because a gathering of Tibetans wore Tibetan dresses, carried Tibetan tsampa (roasted barley flour) and burned some herbal incense?
It is true that the crowd also recited Buddhist scriptures and prayed.
Is this so wrong?
Is it not strange that a powerful country like China should react in this way?
A truly great nation should be able to deal with such trivial issues of cultural autonomy.
Today Beijing seems unable.
One of the reasons is that instead of letting the Tibetan culture bloom, they want to suppress it.
Han Chauvinism has for decades been a serious problem in the Middle Kingdom.
A few years back I wrote an article on the fact that Mao had no objection to the Tibetan flag. The Communist leadership seems today to have become more rigid than the Great Helmsman.
One can only hope that the next generation of leaders who will to take over in October/November will be wiser by granting a genuine autonomy to the people of Tibet.
It will be in the interest of China, which could then concentrate on its peaceful rise and also in the interest of the local populations who aspire to keep their traditions alive. 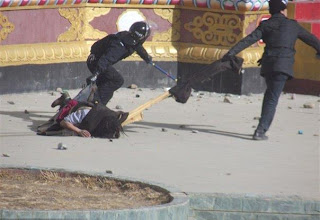 From Tsering Woeser's blog
In Nangchen in Khams, even though the military, police and cadres have been placed on a high state of alert today (Feb. 8), in the afternoon, about four or five hundred Tibetans came to the stadium in the center of the county seat. All were basically lay people: men and women, old and young, residents, merchants, and nomads, the greater part being young people. They all wore Tibetan clothing and carried dry Tibetan tsampa and incense. They sat inside the stadium, reciting Buddhist scriptures and praying. At the same time they ate dry tsampa, demonstrating that they had nothing; that they were suffering inside. Some recited prayers for the Dalai Lama’s long life; some cried out “May the Dalai Lama abide in the world forever!” and “Tibet Needs Freedom!” and some recited other Buddhist scriptures.
Troops and armed police carrying weapons closely surrounded the stadium, but when the Tibetans let out shouts of “Kyi Hi Hi” the troops and police pulled back. However, they kept watch from places not too far away. In addition, public security personnel and local cadres came to the perimeter around the stadium, but when dusk came there had been no clashes. Nevertheless, the Tibetans inside the stadium had not dispersed and continued reciting scriptures and praying.
At the same time several hundred Tibetans went to the great temple (which belongs to the Kagyu Sect) in the Nangchen seat. Wearing Tibetan clothing, they ate dry tsampa.and circumambulated the great temple, turning prayer wheels. Many Tibetans tossed tsampa in the air according to custom. A small number of Tibetans had surgical masks; most Tibetans did not cover or hide themselves.
The great temple in the country seat and neighboring monasteries were already under tight watch by the military and police. Monks were forbidden to go to the stadium and the great temple to participate in these Lhakar activities. It is reported that there were many plainclothes operatives mingling with the protesting populace and taking photos.
It is reported that news of this sort of protest by Tibetans in Nangchen has already been reported to the Yushu Prefecture and the Qinghai Province governments. The prefecture and provincial authorities have already instructed those below to strictly prevent any larger protests, otherwise they will hold the local officials managing things in Nangchen responsible.
Only at approximately 7:30 Beijing time, when darkness fell and it became extremely cold, did the Lhakar activity break up. The military and the police remained tensely on guard around the periphery. The tense, hair-trigger atmosphere had people on edge. Fortunately there were ultimately no clashes. But will there be a settling of scores afterwards? Arrests of peaceful Tibetan protesters? Hard to say.
Tsering Woeser
Posted by Claude Arpi at 7:44 AM