We are often hearing questions about what could be suggested as possible Confidence Building Measures (CBMs) between India and China.
I give here a few suggestions for the border in East Ladakh.
One could add joint patrolling in 'semi' disputed areas; by 'semi' disputed, I mean areas where both parties agree on the area disputed (which is often not the case).

Reopening Demchok
A way forward could be to do what was not done in 1954 during the negotiations for the so-called Panchsheel Agreement: open the Demchok route for the pilgrims visiting Kailash-Manasarovar.
Of course, that would be a first step; the next one being to reopen the border for trade; it could also be done the other way round (first trade, then yatra), if both countries find it more acceptable.
Remember the skirmishes in Sikkim at the end of the 1960s !
When the Nathu-la pass was officially reopened to trade in July 2006, it had the effect of ‘fixing’ the border, drastically reducing the tensions in the area.
Considering the ‘Nathu-la’ effect; reopening Demchok route could be an excellent CBM between India and China in Ladakh.
For years, the people of Ladakh have asked for the reopening of the ancient route.
Why is Beijing, constantly speaking of Old Silk Roads, so reluctant to let people and goods flow again over the Himalaya?
Why can’t China allow trade and the devotees keen to go to Kailash-Manasarovar to use the easiest route via Demchok? 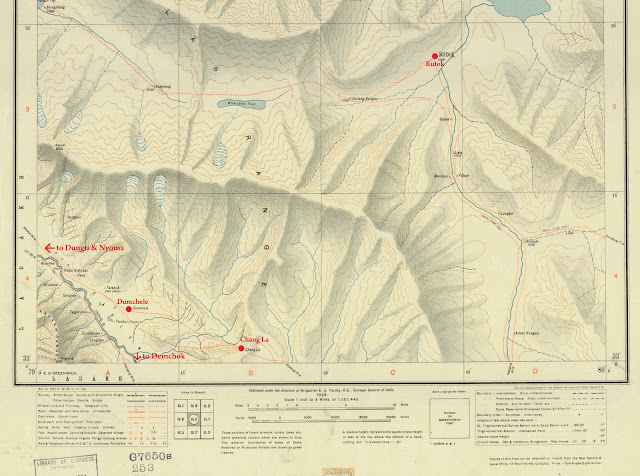 An alternative to Demchok
If China refuses to open Demchok, for whatever reasons, an alternative would be Dumchele.
Very few in India have heard of Dumchele, a place located east of the Indus river, on the Chinese side of the Line of Actual Control (LAC) between India and China; it used to be marked as a ‘grazing ground’ on old maps of the British Raj.
A couple of months after the 1962 border war, Dumchele appeared for the first time in the correspondence between India and China. On January 4, 1963, Delhi complained that China had an “intemperate and blatantly aggressive attitude”.
One of the examples given was that on October 22, 1962, the Chinese forces had attacked Indian posts at Chang-la, Jera-la and Demchok and occupied “fresh Indian territory upto Dumchele, east of Fukche.” Fukche was then an advanced Landing Ground (ALG) then used by India, West of the Indus.
Since then, the situation has stabilized and the Indus river has become a more or less agreed LAC till Demchok, located some 50 km South of Dumchele.
Though Dumchele is one of the 12 places where India and China have a difference of perception on the location of the LAC, this is not an insurmountable difficulty; The Hindustan Times recently mentioned the opening of a trading post which “could open as soon as the end of the year”.

From Smuggling to Trading
If the political leadership decides so, Dumchele could also become a new Border Personnel Meeting (BPM); presently the meeting points between the Indian and Chinese armies in Ladakh are located at Chushul and Daulat Beg Oldi (known as DBO).
Though Demchok, the historical landport would temporarily be set aside in favour of Dumchele which was the main smuggling center between India and China in Ladakh till 2016, when it was stopped for security reason.
The opening of Demchok or Dumchele would boost the local economy (both sides) and satisfy the local Indian sarpanches …and one day, one can dream of a new route (without crossing a single pass) to Mt Kailash. It would then become the fastest and easiest access to the holy mountain.
It could be an important step on the path of peace and would show China’s sincerity to open its frontiers with its neighbours.
Practically, it would mean, building a bridge over the Indus and build a tar road from Dungti to Dumchele. Technically, it is not a very difficult proposition. 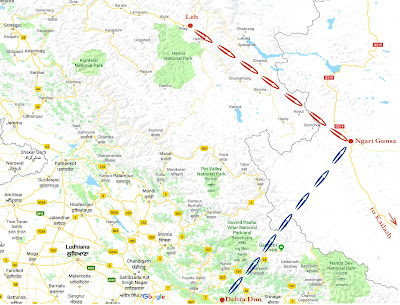 Another possibility
Another feasible alternative would be to give Indian pilgrims access to Gunsa Ngari (Ali) airport.
Recently a two-day meeting between the representatives of the aeronautical authorities of Nepal and China was held to discuss issues pertaining to bilateral air transportation under an Air Services Agreement signed by the two countries.
According The Global Times: “As per the MoU signed between the two sides today, the Chinese side has agreed to designate eight more destinations in China for flights operated by Nepali Airlines, in addition to the existing seven destinations viz., Beijing, Shanghai, Lhasa, Guangzhou, Kunming, Chengdu and Xi’an.”
But more interesting for our purpose, the Chinese tabloid notes: “The two sides also reached a common understanding that after the development of adequate technical facilities at Gunsa Airport in Tibet, flights of Nepalese airlines would be allowed to land at that airport while circumnavigating Mt. Kailash as part of mountain flight.”
Then only a few hours will be necessary for the yatris to reach the base camp of the pilgrimage (via the beautiful G219 highway).
Opening Gunsa airport to Indian flights could be a serious alternative for the Kailash-Manasarowar yatris (especially old ones); the Indian pilgrims could fly from Dehra Dun (Uttarakhand) or Leh (Ladakh) airports after proper acclimatization in the lines of the ones, organized by the Government of India in Pittoragarh district for the Lipulekh-la route or near Gangtok for the Nathu-la one.
This would give a boost to the economy on both sides of the frontier, and show China’s goodwill.
Posted by Claude Arpi at 7:01 AM