The Tale of Three Zhaos 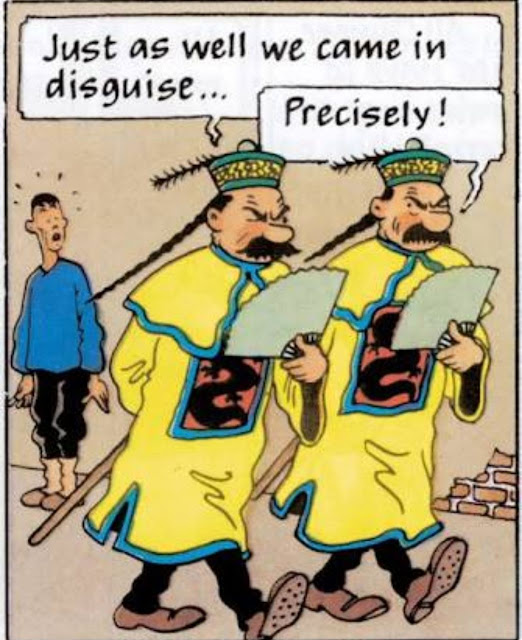 Many of us have been introduced to Tibet by the famous cartoon The Adventures of Tintin.
One can’t forget the two detectives, Thomson and Thompson (in French, Dupond et Dupont). Though they are rather poor detectives (like Inspector Jacques Clouseau), they provide so comic relief to the reader..
These characters, who look like identical twins (despite their different, though sounding-same surnames), came back to mind, when I saw the picture of China’s two main detectives, Zhao Leji and Zhao Kezhi attending a session with the Tibetan delegates at the 13th National People Congress (NPC).
Zhao Leji is the Secretary of the Central Commission for Discipline Inspection, (CCDI) the party's top anti-corruption body. He is also a member of the all-powerful Politburo Standing Committee.
Zhao Kezhi is Minister and Party Secretary of the Ministry of Public Security; in other words, he is responsible for the security in the Middle Kingdom. As mentioned earlier on this blog is also a centrally-nominated delegate from Tibet to the NPC.
Let us not forget that the CCDI has the power to summon and detain without charge any member it suspects of breaching party rules and regulations. Suspects are barred from seeing a lawyer while they are detained.
Zhao and Zhao do not bring comic relief to anyone in the Kingdom.
The South China Morning Post noted: “A new supervision law detailing how the new super agency will operate is to be put to a vote on March 20, the last day of the legislative meeting.”
According to the Hong Kong newspaper, the new agency will be a merger of several government and prosecutorial anti-graft departments: “A  whole chapter in the amended constitution is dedicated to the new agency. Its chairperson will be appointed by the National People’s Congress, which is the only body overseeing the commission. The legislature also has the power to dismiss the agency’s chairperson.”
Zhao Leji will be chairman of the new Commission.
The fact that China’s two supreme detectives attended the meeting of the Tibet delegation does not augur well for the aspirations of the Tibetans.
A website site mentioned in an earlier post said: “The TAR spends around three to five times more on domestic security than the average of all provinces and regions. Likewise, Xinjiang’s spending between 2014 and 2016 has been double that of the national regional average, and over triple in 2017. While domestic security spending across all provinces and regions rose by 215 percent between 2007 and 2016, Xinjiang’s grew by 411 percent, the TAR’s by 404 percent, and Qinghai Province’s by 316 percent (Qinghai’s population is 25 percent Tibetan). Spending in Sichuan Province increased by 234 percent, but spending in Sichuan’s two Tibetan Autonomous Prefectures, Ganzi and Aba, which have seen numerous self-immolations since 2008, grew by 295 percent.”
The same website remarked: “Incredibly, the TAR and Xinjiang are beginning to rival the per capita domestic security expenditures of the United States. This is despite the fact that Chinese human resource and local security technology costs are far lower than in the West.”

Meeting the Tibetan delegates
While President Xi Jinping met with the NPC’s deputies from the Chongqing municipality to urge them to follow a ‘clean and upright political ecology’, Zhao Leji told the Tibetan delegation that “the campaign against the mentality and action of privilege seeking should be continued.”
According to Xinhua, he called “for actions against formalities for formalities' sake, bureaucratism and various kinds of misconduct, so as to keep the pressure on conduct problems.”
It is at least what was reported...


Stability of the borders with India
In the meantime the propaganda about the Indian borders continues.
Drolkar (earlier spelt Choekar), the deputy of Yume, north of the McMahon Line, said that she wants to build her hometown as beautiful as kalsang flower (a reference to the letter that she received from Xi Jinping).
"Great changes have been seen in my hometown," she affirmed.
She added: "We have highways, we have power, and new homes are being built as well. We also have stores, restaurants, and family inns right in the village. You even don't need cash when shopping, for everything can be paid via your cellphone,"
Border people are happy in China according to Drolkar with their “more and more convenient life in hometown.”
Drolkar said she will continue to safeguard the border region in future.
For half a century, her family grazes their sheep and cattle there to safeguard the border area, asserted Drolkar.
Xinhua commented that her story has deeply touched the heart of people across the country.
So, where is the need of the two top detectives of the Kingdom, Zhao and Zhao, monitoring Tibet affairs, is people are so happy?
And one should not forget the Third Zhao, General Zhao Zhongqi, the commander of the Western Theater Command, who looks after the Indian borders and is said to have started the conflict in Doklam last year.
The Tale of the Three Zhao is a sad story.
Posted by Claude Arpi at 6:51 AM