The Last Days of Tibet

A review of my book Tibet: The Last Months of a Free Nation, India -Tibet Relations 1947-1962, Part 1 appeared in The Hindustan Times.
The review, titled The Last Days of Tibet (Two very different accounts of the end of an era make for fascinating reading), has been written by Thubten Samphel, the Director of the Tibet Policy Institute in Dharamsala.
The reviewer looks also at another book, Tibetan Caravans: Journeys from Leh to Lhasa, Abdul Wahid Radhu, Speaking Tiger publishers.
Incidentally, a few years ago, I wrote a chapter of a book on Abdul Wahid.
It was called The Life and Time of Abdul Wahid Radhu - A case of fusion of cultures
Click here to read...

Here is the link to the review... 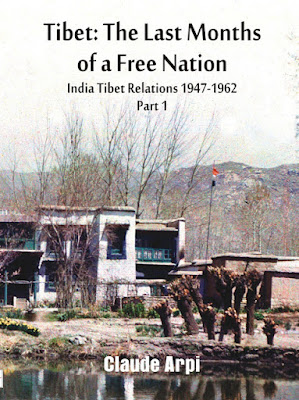 Claude Arpi’s book and Abdul Wahid Radhu’s work share a common thread -- both are accounts of the last days of Tibet. While Arpi digs into the archives of the government of India to reconstruct the period, Radhu has witnessed the end of an era.

Arpi’s narrative reveals newly-independent India grappling with a deep diplomatic dilemma. Three years after India gained independence, Tibet lost hers. Indian policy-makers were divided into two camps on how to tackle the situation. The idealists, dominated by Jawaharlal Nehru, India’s charismatic first prime minister, felt that accepting the fait accompli of Chinese occupation of Tibet was a small price to pay for a resurgent and united Asia after centuries of Western colonialism. The realists, led by Sardar Vallabhbhai Patel, India’s deputy prime minister, argued that communist China was not working towards a resurgent, united Asia but towards an Asia dominated by a new China. Beijing’s invasion and occupation of Tibet was the first step towards fulfilling its expansionist goal.
Arpi has comprehensively documented this debate on China’s true intentions. Using the archives at the Nehru Memorial Museum and Library, he has pieced together India’s contradictory impulses in meeting China’s challenge in Tibet. On the one hand, India had deep sympathy for Tibet based on the ancient bonds of culture and a shared spiritual heritage. On the other, there was the sinking recognition that this sympathy could not be translated into military and political support because the changed geopolitical balance favoured China due to its military presence on the plateau.
Finely researched and passionately told, Claude Arpi’s new offering is the first detailed account of the internal policy debate that raged at the highest level of the new republic on formulating the most effective response to the occupation of Tibet. With the death of Sardar Patel, the idealists won the argument and Tibet’s fate was sealed when India signed the Panchsheel agreement with China, which recognized Tibet as an autonomous part of the People’s Republic.
India’s feeble response to Beijing’s occupation of Tibet was compounded by the mistakes Tibet made. Arpi recounts that instead of seeking cooperation and support from the new Indian republic, the Lhasa government in its first official communication with independent India demanded the return of Tawang. In his interview with Arpi, the Dalai Lama exclaimed in amazement,“What a wonderful government!” at Lhasa’s diplomatic ineptitude and ignorance of obligations imposed by treaties.
The issues that Arpi has explored in his massive book are ones that India will continue to grapple with in the years to come as New Delhi fine-tunes its policy towards China, that reaps the benefits of expanding trade but confronts Beijing’s political and military assertiveness.
If Tibet was isolated diplomatically, its engagement with its neighbours was active, robust and profitable. This was made so by a network of caravan trails that carried goods over vast distances infested by marauding brigands. One of these caravan routes was the one from Leh to Lhasa, a tributary of the ancient Silk Road that connected China with High Asia, Central Asia, and the West. This culture of caravanserai that radiated throughout Asia is wonderfully evoked in Tibetan Caravans, a leisurely travelogue rich in detail and sharp in observation. The travel diary was kept by the late Abdul Wahid Radhu, a cosmopolitan Ladakhi Muslim, a graduate of Aligarh University and who, in the course of his life, travelled to Tibet, China and all over northern India.
Radhu made his first caravan journey to Lhasa in 1942 when World War II engulfed Europe and the civil war in China between the Nationalist Chinese and communists was tilting in favour of Mao’s forces. Those forces would soon be in Tibet, disrupting the Radhu family’s profitable trade and with Abdul Wahid himself being caught up in the last ditch effort to salvage whatever was left of political Tibet.
Radhu begins his diary 76 years ago. “Today, 19 September 1942, the twentieth day of my life as a married man, I left my family, my wife, my aunt and sister. I left for Lhasa to learn the trade of being a merchant, supervised by my Uncle Abdul Aziz, head of the Lopchak caravan.” This was a part of the exchange of trade and courtesies between Leh and Lhasa.
Tibetan Caravans provides for the first time detailed information on the life of the Ladakhi Muslim trading community in Lhasa and the community’s interaction with Tibetans, both high and low, and the writer’s observation of the Tibetan character. Radhu observes, “Tibetans were a well-balanced people with common sense, happy, spontaneous, quick-witted, fun-loving… Certainly, Tibetans also had their faults, the most flagrant being their physical uncleanliness… also superstition, and in the upper classes, a taste for power and intrigue.”
Radhu is a nostalgic witness to the end of two eras: the way of life of the caravaneers and the demise of political Tibet.
Posted by Claude Arpi at 8:25 AM