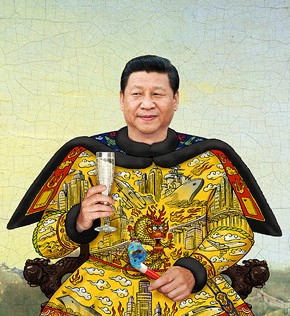 My article Xi Jinping: Chinese Emperor for life? appeared in the Edit Page of The Pioneer.

A dictatorial system may help Beijing bring some stability to its giant ambitions, but it may not solve the real issues — be it international politics, Doklam or internal talk points

Emperor for Life’ it is what many commentators concluded after the announcement of the proposed removal of the limit in the presidential term in China. At the end of the forthcoming National People’s Congress session, to be held early March, the Constitutional barrier on the presidential term of office would be lifted, opening the door for President Xi Jinping to stay for many more terms as President of the People’s Republic of China, ‘just like other authoritarian potentates’, wrote an analyst.
According to The South China Morning Post, which extensively covered the issue: “The bold move would send a message that Xi and his initiatives were here to stay and cement China’s ambition to fill the global leadership vacuum left by US President Donald Trump.”
But at what cost? There are indeed risks of backlash over Beijing’s foreign and domestic politics. The Hong Kong newspaper noted that the general feeling is that “the next few years could be volatile for China and frictions over controversial moves such as the military build-up in the disputed South China Sea would remain.”
For Michael Kovrig, senior adviser for China and North East Asia at International Crisis Group: “While an all-powerful Xi could build on the strength of China’s centralised party-state system and make for a bold and decisive China …whether that is good for China and the world, depends on whether that one man makes the right decisions.”
That is exactly the issue. Right now, trends are extremely worrying, whether it is in international politics, like in the South China Sea or Doklam or in internal issues, for example, the ever-more sophisticated repression in places like Tibet and Xinjiang, using the latest technological advances such as facial recognition.
Of course, the move could bring some stability to the so-called Chinese Dream. As Orville Schell, the veteran China watcher and director of the Centre on US-China Relations at the Asia Society in New York put it: “By enabling planners to project China’s ambitions abroad with more long-term certainty and continuity, the large-scale, global projects it has already launched — such as the Asian Infrastructure Investment Bank, the Belt and Road Initiative, the occupation of the South China Sea, and even its undeclared intention to become hegemon of the Asia-Pacific — now suddenly gain a new presumption of being successfully carried out.”
But Schell added: “Xi’s enthronement as its new Napoleon could have some salutary consequences, as did the reign of the French emperor, even as he led France in catastrophic wars.”

The Napoleonic example
If one follows the Napoleonic example, Xi might finish his days on a St Helen island (in the South China Sea?) or worse for him, in Qincheng Prison, the maximum-security prison located in the Changping District of Beijing Municipality. One can’t forget that there have been many turns of fate in the history of the Middle Kingdom; nobody really knows what would be in stock for the Emperor if Heaven decides to withdraw its Mandate.
What does an unlimited term for the presidency mean? First, it is necessary to note that the role of President in China is rather nominal, even though the Head of the State usually represents his country in world fora; something Xi is certainly keen to preserve.
In the Communist system, the real power lies with the party’s General Secretary and the Chairman of the Central Military Commission (CMC); the presidency is considered the least important of these three hats that Xi is presently wearing.
With no fixed limit on the tenure of the party’s boss and CMC’s Chairman, Xi could theoretically remain in power if he refuses to relinquish his two main jobs: “But he would not be able to represent China as the Head of State without the presidency,” observers told the Hong Kong newspaper.
The removal of the term-limit is also a message to his possible successors; they better abandon their hopes and stop jockeying for the post of next Emperor; saying ‘yes, yes, Mr President’, while waiting him out.
David Shambaugh, author of China’s Future remarked: “He could have stayed in power as both party General Secretary and Chairman of the CMC, but without changing the presidential statute, he would technically not have been able to represent China on the world stage. This is a clear indication that Xi plans to stay in power indefinitely.”
But there is another aspect. Though not always apparent, the Chinese state is terribly instable; the change from a totalitarian to a quasi dictatorship should be seen in this perspective.
Tellingly, the BBC reported that the new controversial move “has ignited discussion on Chinese social media and pushed online Government censors into overdrive.” It cited several key terms which had suddenly been subjected to strict censorship on Sina Weibo, the Chinese Twitter.
It quoted The China Digital Times, which noted that the following words/phrases were censored as soon as the new amendment was announced; banned were: “I don’t agree; migration; emigration; re-election; election term; constitution amendment; constitution rules; proclaiming oneself an emperor; Winnie the Pooh (a derogatory nickname used in the social media for Xi); what’s going on?”
The BBC added: “But many observers have been alarmed at the prospect of Mr Xi becoming an ‘emperor for life’, so it’s not surprising that overtly critical posts [are banned]”.

Another grim issue is corruption.
According to a commentary which appeared in huaglad.com, which is reporting on Chinese affairs from Australia, Ding Xuexiang, director of the CCP’s General Office and Xi Jinping’s close collaborator, recently spoke to the party’s senior cadres; Ding admitted that almost all those who have been investigated after the 18th National Congress in 2012, had ‘political issues’; some of them even had the intention to ‘usurp the party and seize power’.
Ding’s speech was a warning to the Jiang Zemin’s faction: “According to statistics, over the past five years, over 440 provincial level officials were the subject of investigations, including six officials who had the highest rank.”
They all belong to the Jiang faction and had planned to have Bo Xilai promoted to the Politburo Standing Committee before ousting Xi Jinping from his post. At the 19th Congress in November last year, Sun Zhengcai, another heir-apparent, was removed for the same reason.
Even more worrying is the fact that Xi’s anti-corruption campaign has so far had little impact “…even though Xi has conducted the anti-corruption effort over the past few years, the corruption has been getting worse in China.”
Apparently, corruption has “penetrated all levels of the party structure and has become part of the party culture, which will eventually drag down economic growth. Xi is facing a tremendous challenge in dealing with his corrupt party and the problems can’t be fixed simply with an administrative order or an anti-corruption campaign.”
It is doubtful that adopting a dictatorial system will help solve the real issues facing China. It is worth watching.
Posted by Claude Arpi at 8:11 AM