Why all this fuss for a few Indian tunnels?

The meaning of ‘double standards’ is unknown in China.
After The Economic Times reported that India plans to construct 17 highway tunnels totaling 100 kilometers along the line of actual control, The Global Times bitterly complained.
The Party mouthpiece quoted Xie Chao, an ‘expert’ at Tsinghua University's Department of International Relations, who said that: “boosting border infrastructure has been Indian's consistent policy.”
A poor joke, when one knows the reality.
Another ‘expert’, Zhao Gancheng, director of the Center for Asia-Pacific Studies at the Shanghai Institute for International Studies stated that "the tunnel building along the border is a further fermentation after the Doklam standoff."
He reiterated China’s baloney stand: “One June 18, Indian troops illegally crossed the border and trespassed into Chinese territory in Doklam.”
Fermentation or not, India is far behind China in the field of infrastructure.
Zhao dared to tell The Global Times: “Although some Indian senior officials made a friendly gesture toward China after the standoff, India has pursued its previous policy along the border - developing infrastructure as well as troop mobility.”
The Global Times commented; “The Indian government is playing two cards over the border issue, the situation of which will be a ‘new normal’ for the China-India border.”
Xie Chao warned: "It is the Chinese government's responsibility to safeguard border safety and China won't take the initiative to seek military force to tackle border problems. But a balanced force along the border will make China cope with the tensions."
Is it not ‘double standards’?
While India is 20 or 30 years behind China is terms of development of border infrastructure, the slightest improvement on the Indian side is shown by Beijing and its ‘experts’ as an aggressive move. 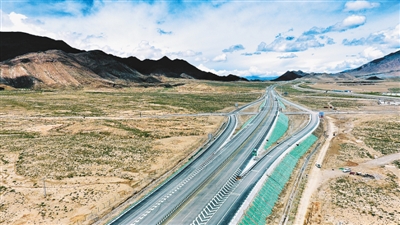 Infrastructure on the Tibetan side
Just read the Chinese press, you will understand.
On October 28, China Tibet News announced that the newly-built runway of Chamdo Bangda Airport was officially put into use, “ushering in a new period of rapid growth.”
A total of 19,000 flights took off or landed at Bangda Airport; it boasts of 1.876 million passenger throughput. The new runaway will improve further the traffic: “In 2015, with a total investment of 849 million yuan [150 million US dollars], the airfield renovation project was started and it was built on 4C standard,” said the website.
Chamdo Bangda Airport has already flights to Lhasa, Chengdu, and Chongqing; soon planes will be able to fly to Tianjin, Fujian, and other Mainland cities.
At the same time, the reconstruction project of the highway from Shigatse Peace Airport to Shigatse City has begun, Shigatse will become “a comprehensive transportation hub”.
It will be an important part “for Tibet's export-oriented economic development,” said the website. Practically it will be a next stage towards opening a road and railway to Nepal.
According to China Tibet News: “After this project is completed, it will improve the regional traffic conditions and play a key role in meeting Tibet's high grade highway demand.” 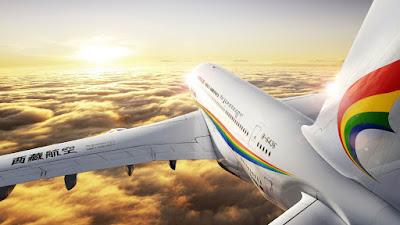 On October 23, another website, China Tibet Online affirmed: “China's central government continues to increase support for infrastructure construction in southwest China's Tibet and Tibetan-inhabited areas in Qinghai, Gansu, Sichuan and Yunnan Province, striving to break the bottleneck that constraints the social development and people's livelihood improvement in those regions.”
According to the Chinese website: “Since 2012, Tibet has opened the Lhasa-Shigatse Railway, and the Lhasa-Nyingchi Railway also enters its construction, starting a new era in railway construction. Highway distance increased from 62,500 kilometers in 2012 to 82,100 kilometers in 2016, an increase of 25.9 percent. There are 71 domestic and international air routes connecting Tibet with 41 cities.”
And the list goes on.

Developments in Tibetan-inhabited areas
The fast-track infrastructure development is not limited to the Tibetan Autonomous Region; it extends to the Tibetans-inhabited provinces.
So why this fuss for a few Indian tunnels, which will take years to materialize?
In the power fields too, giant steps are taken on the plateau.
China Tibet Online provides details on the Sichuan-Tibet Power Interconnection Project which has recently been put into operation, “eliminating serious power shortages in Chamdo City in the Tibet and the southern part of the Garze Tibetan Autonomous Prefecture in southwest China's Sichuan Province. The total power installation capacity is 2.65 million kilowatts, 1.3 times more than that in 2012.”
It is said that it for the first time Tibet achieved net electric power transmission of 200 million kilowatts hour outwards.

More infrastructure in Sichuan
The same website further asserts that “Sichuan implemented two rounds of the ‘three-year transportation battle’, while completing and opening the Yading airport in the Daocheng County in Garze and the Hongyuan airport in Aba Tibetan and Qiang Autonomous Prefecture, construction on the Gesar Airport in Garze, the Chengdu-Lanzhou Railway, the Chengdu-Ya'an part of the Sichuan-Tibet Railway and the Ya'an-Kangding as well as Wenchuan-Markham Highways have also begun. At the end of 2016, the total distance of the highway in Tibetan-inhabited areas in Sichuan reached 45,200 kilometers.”
Does India complain each time, China open a dual-use airport on the plateau?

In Yunnan too
At the same time, in Yunan Province, “1,142 projects have been completed of the 1,344 major projects implemented over the last five years, and a total of 103.9 billion yuan (15.7 billion US dollars) have been invested.” While Gansu Province opened in 2013 the Xiahe Airport and the Linxia-Hezuo Highway, respectively the first civil aviation airport and the first highway in its Tibetan-habited areas, the first railway line, from Lanzhou to Hezuo, has also been under construction in 2016. There are currently 10,046 kilometers of highway, and 95 percent of villages are accessible to modern transportation in the Tibetan-inhabited areas.”
The highway coverage in Tibetan-inhabited areas of Qinghai Province reached 65,117 kilometers in 2016, increasing by 11,367 compared with 2012. The 251 townships and 1,659 villages in its Tibetan-inhabited areas are all accessible to highways.
This is not called ‘double standards’ when so-called experts complained after India struggling to provide genuine communication facilities for the border population in the Himalaya.

In the meantime, a combined army brigade under the PLA's 77th Group Army (former 13th Group Army) practiced at an altitude of 4,700 meters on the plateau area on November 7, 2017.
India is not making a fuss. 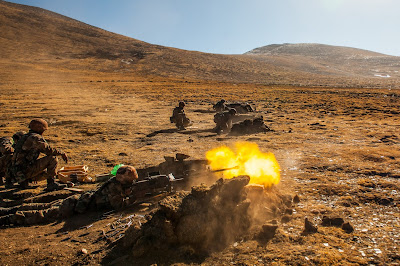 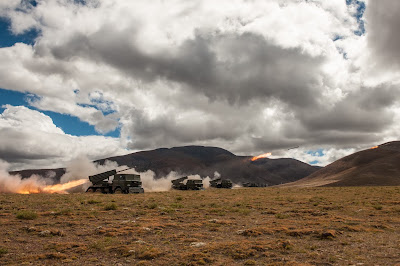 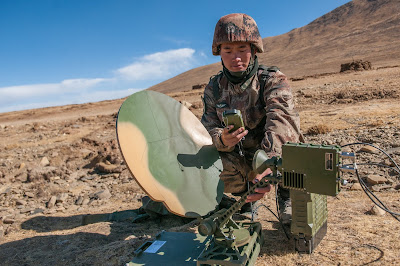 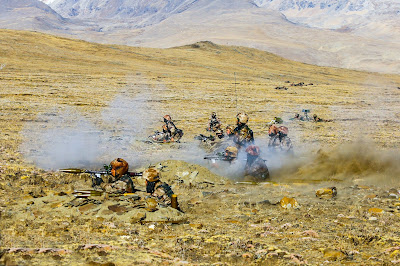 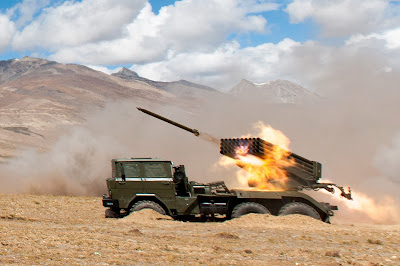 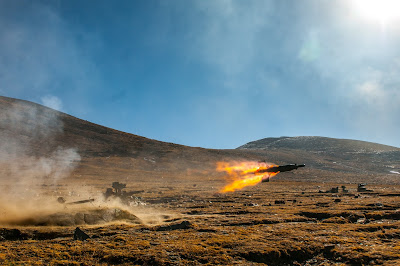 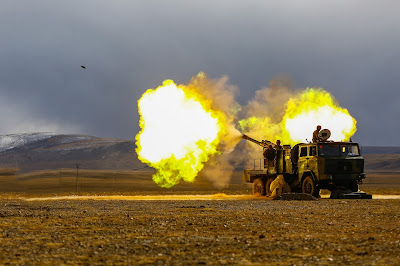 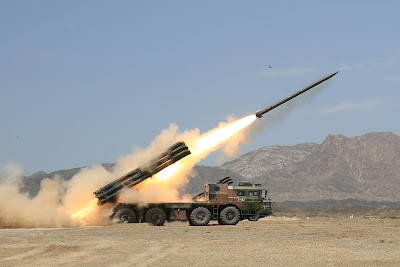 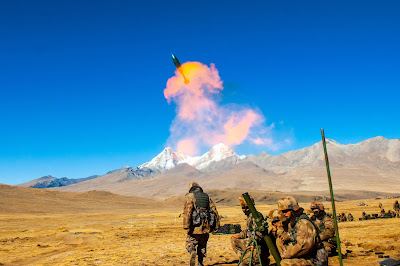 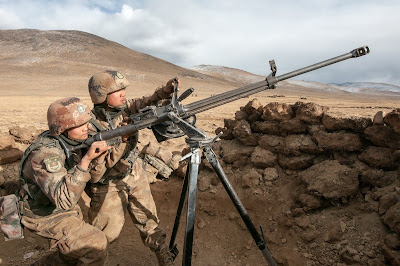