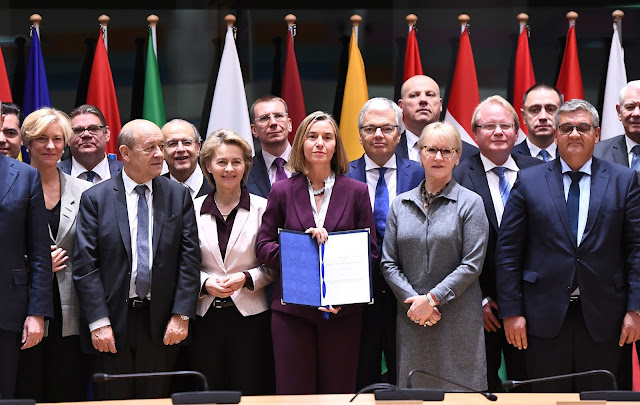 My article EU's defence partnership has lessons for India appeared in Mail Today/DailyO.
Here is the link...

New Delhi must find strategic partners to prepare for tomorrow.

One man, Jean Monnet, has been central to the creation of the European Union. He had the vision to propose certain basic principles which became the bedrock of the multi-national institution. At the end of World War II, as Europe was going through one of the most traumatic periods, he created the "circumstances" under which a successful partnership could take shape.
The first principle on which Monnet worked was: Any association, partnership or union should be built among equals. Though at the end of World War II, Germany was the loser, from the first days of the European Coal and Steel Community (ECSC), France and its neighbour acted as equals. This principle remained to date.

Principle
Another principle set by Monnet and his colleagues is that the association should be voluntary. In the summer of 1950, Monnet thought of an organised European defence on a supranational basis; he presented his proposal to René Pleven, the French Prime Minister. Pleven proposed to his European partners the plan to constitute a European army of 100,000 men (including German soldiers) which would operate under a European minister for defence, endowed with a common budget and placed under the supreme command of the North Atlantic Treaty Organisation (NATO).
In 1954, the European partners failed to agree to the European Defence Community (EDC); the loss of the national "independence" was probably a step too far, too early.
It would have been a first if independent states had agreed to create a supranational authority to which part of their national sovereignty was delegated. It had worked for the ECSC in 1951; and with the Treaty of Rome in 1957, it had gone a step further with the creation of supranational European institutions like the European Economic Community and the European Community for Atomic Energy; however, Europeans nations were not yet ready to trust their partners for their own defence.
Sixty-three years later, most of the EU states have agreed to create "the nucleus of a joint army". On November 13, 23 out of 28 EU member states signed a declaration in Brussels, which will become legally binding at an EU summit next month. Britain (which has historically opposed the EDC), Denmark, Ireland, Malta, and Portugal did not sign.
The EU’s foreign relations commissioner, Federica Mogherini, spoke of an "emotional moment"; she said that the move will help "dismantle the ghosts of the past" and demonstrate that "the taboo concerning EU defence could be broken". She added: “This could be an inspiration for other areas of EU integration.”
For those who have followed the European integration with its ups and downs, it is an elating moment, though it did not make the first pages of the world media. It is indeed revolutionary. According to the new agreement, the European nations will jointly manage a rapid reaction force and jointly develop new equipment. A single European logistics and medical support hub will be created. The participants will be bound to increase defence funds for R&D. A single hub for overseas military training missions will also be set up.
Some see this development as a reaction to an inward turn of the United States under President Donald Trump, but also the instability at Europe’s gates as well as the increasing number of Islamist terrorist attacks.

Project
The final project is less ambitious than some EU states, such as France and Italy, had wanted; but it is a promising beginning. Mogherini explained the rationale behind the move in simple words: “The world is changing.” Jens Stoltenberg, the NATO boss, meanwhile, considered the project "good for Europe and good for NATO".
French President Emmanuel Macron, whose visit to India has been postponed for a couple of months, in September, called for a "profound transformation" of the EU, requiring “deeper political integration to win back the support of disgruntled citizens.” He even suggested blocs moving forward at differing speeds which may help the UK to “one day find its place again”. Macron pleaded for the EU to return to its founders’ "visionary" ideas, “born out of the disaster of two World Wars”.

Collaboration
This comes at a time when Airbus Defence and Space (DS), itself the outcome of a close European collaboration, announced the concept of a new fifth-generation fighter plane which could replace the Eurofighter Typhoon and Dassault’s Rafale in the 2040s. Antoine Noguier, DS’s strategy head, affirmed: “Germany and France have taken the decision to develop a new combat aircraft to maintain sovereign and European capabilities.”
Florence Parly, the French minister of armed forces, who was recently in Delhi, commented on the European structure: “What France wished, it is the possibility to develop a strategic structure, common to all the States, which would have the capacity to intervene in extremely rapid conditions.”
In other words, joint operations.
A less ambitious German project ultimately prevailed. “Structured and permanent cooperation, as inclusive as possible”, it will have more chance to succeed.
The creation of the new European defence structure is a ground-breaking move, not only in terms of European defence, but also in the field of research and development. We could tomorrow see a new European aircraft carrier, new European drones or a breakthrough in quantum communication.
The French say, "l’Union fait la force" (union makes you strong). India should watch the happenings in Europe and definitively learn from it in terms of collaboration. The time has come for Delhi to find reliable strategic partners to prepare for tomorrow.
Posted by Claude Arpi at 3:53 PM