The Tibet Recipe, a New Airport in Xinjiang 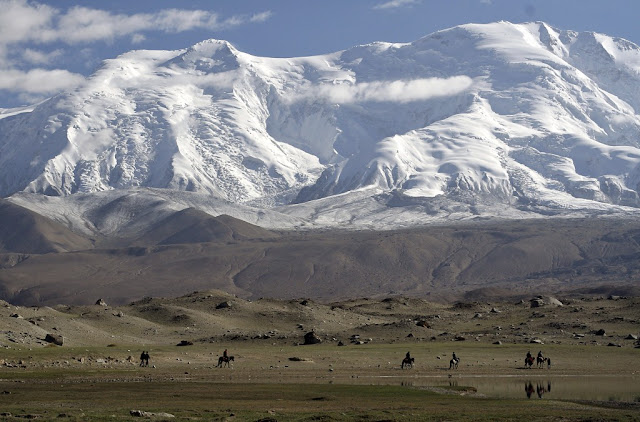 Xinhua announced yesterday the construction of a new regional airport in Xinjiang.
It will be built in Yutian, a remote County of Hotan/Khotan Prefecture in Xinjiang Uygur Autonomous Region (XUAR). Yutian is also known as Keryia.


Already in 1953
On July 15, 1953, a CIA note dealing with “Chinese Communist Troops, West Tibet” and “Road Construction, Sinkiang to Tibet and Ladakh” mentioned that late 1952, the 2 Cavalry Regiment, commanded by one Han Tse-min, had set up his headquarters at Gartok (the main trade centre in Western Tibet).
It announced that the regiment had 800 camels and 150 men garrisoned at Rutok, in the vicinity of the Panggong lake.
At that time, the 2 Cavalry’s commandant spoke of the Chinese intention to built three new roads in the area.
Though the road between Rutok and Keriya was never completed, the Chinese engineers never dropped the project.The main difficulty is to cross the Kunlun range, south of Keriya 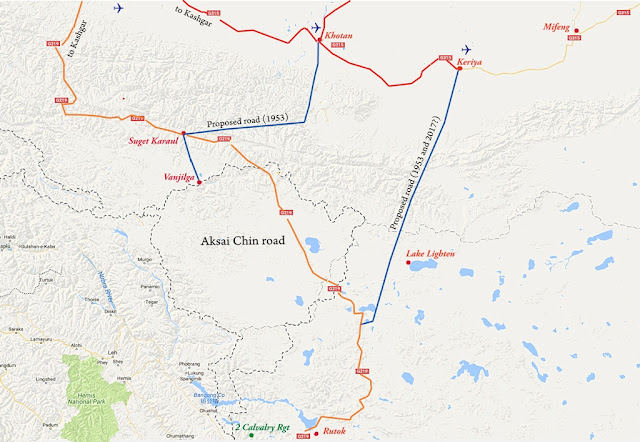 In December 2016, I mentioned on this blog the construction of a new road linking Xinjiang and Tibet. National Highway 216 (G216) runs in the XUAR in the southern direction from Altay City to Baluntai in Hejing County, where it joins China National Highway 218. It is 857 kilometres in length.
The starting point of this project is the Jieze Lake near the G 219 highway (north of Rutok). The road will be built “in accordance with the two-lane highway construction,” asserted then a Chinese report.

New airport planned in Keriya
In this context, and in view of the proximity of the Indian border, it makes sense for China to have a new ‘civil’ airport at Keriya (Yutian is the Chinese name), considering that there is no such thing as a 'civil' airport in China, especially so close to the Indian border (Aksai Chin).
Keriya airport is designed to annually handle 180,000 passengers and 400 tonnes of cargo; it will cost 104 million US dollars and witness more than 2100 annual take-offs and landings every year.
The airport will have a 3,200-meter runway, a 3,000-square-meter terminal building, four aprons, and facilities for air traffic control and power, water, heat and fuel supplies, says Xinhua.
The project has been cleared by the National Development and Reform Commission (NDRC) and the Civil Aviation Administration of China and announced by the regional NDRC.
The Yutian/Keriya County, located south of the Taklimakan Desert, and north of the Kunlun range, covers 39,500 square kilometers and has 277,400 permanent residents.
It is a major stop over on the ancient Silk Road (OBOR), according to the Chinese news agency. The nearest airport, in Khotan/Hotan City, some 200 km away and north of the disputed Aksai Chin.
Interestingly, Yutian airport is one of 10 new airports to be built in Xinjiang by 2020.
Six older airports will also be soon renovated and expanded.

The Tibet recipe
At the end of August 2016, Wu Yingjie took over as Party Secretary of the Tibetan Autonomous Region (TAR) from Chen Quanguo who was sent to ‘pacify’ Xinjiang. The decision had been taken during the annual closed-door meeting at Beidahe.
An official statement released had then announced that Zhang Chunxian would be replaced by Chen Quanguo as secretary of the XUAR’s Committee of the Communist Party of China (CPC).
This was indeed a promotion for Chen, given the fact that Xinjiang's Party Secretaries often serve in the Politburo (though Chen will have to wait until the 19th Party Congress later this year to find out if he has made it).
His selection was linked to the Tibet recipe, the way Chen managed to ‘pacify’ Central Tibet.
There is no doubt that Chen will apply the same formula in Xinjiang: bring millions of tourists and ‘dilute’ the Uyghur characteristics.
The 10 new airports, particularly the new one in Keriya/Yutian have to be seen in this perspective.
Posted by Claude Arpi at 6:44 AM