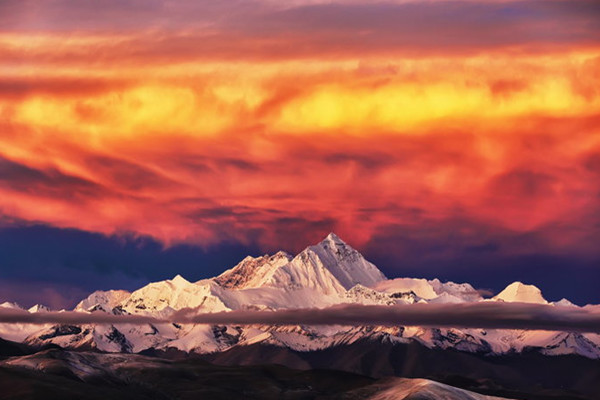 A 'Tibet-South Asia' promotion meeting for travel products was held in Lhasa on June 11.
The theme was ‘crossing Himalaya, rambling paradise in the clouds’.
China Tibet News, a Chinese website says that more than 100 travel agencies from inside or outside Tibet took part in the promotion meeting.
What was the objective of the gathering?
The website said to “show innovative idea of product design on Tibet’s travel, strengthen exchanges and communications with fellow traders, promote developmental directions of individuation, branding, and high-end quality in tourism industry, activate developmental vitality of folk travel organization, as well as expand upgrading of tourism product and profit space.”
This is fine.
A question however remains, why ‘Tibet-South Asia’?
Apart Nepal, Tibet has no ‘tourism’ contact with any ‘South Asian’ country.
Except for the Kailash-Mansarovar Yatra opened from Pittoragarh district of Uttarakhand and Nathu-la in Sikkim, there are no ‘tourist tours’ crossing over the Himalaya to Tibet or vice-versa.
During the meeting in Lhasa, some travel agencies made some major recommendations for outbound ('out of Tibet') tourism products for Nepal …and other South Asian countries.
It is there that the route to Chumbi Valley and Yatung (written Yadong by the Chinese) was mentioned.
The article said that the ‘Yatung border tour’ aroused everybody’s interest.
According to Qiao Zhifeng, director general of Yatung Tourism (under Shigatse City’s administration), the Yatung County has rich touristic resources and apparently, the local government has been keen “to exploit Yatung tourism since 2016.”
Quio explained that a three-day tour from Lhasa-Yatung has become “a very mature travel route, it also has attracted a lot of self-driving tourists and group tourists.”
He added: “In the future, we will continue to plan and develop colorful tourism products relying on abundant and superior tourism resources, and the market. At the same time, we will strive to improve the infrastructure construction of software and hardware to attract visitors from all over the world.”
'Improve the infrastructure' means 'bring the railway line to Yatung'?

Chinese tourists in India via Nathu-la?
Can the next step be to send Chinese tourists to India via Yatung and Nathu-la?
In July 2006, at the time of the opening Nathula pass for trade between India and China, Sun Yuxi, the then Chinese Ambassador in India told some journalists that Beijing planned to extend its railway linking Beijing to Tibet, to a newly opened border point in India's northeast and possibly link it to India's east coast.
Sun said "From Yadong, the Indian border area is only a few dozens of kilometers away. Then, anytime we feel the need we will link it. If the train got through all the way to Kolkata, that will be something. Lots of potential, opportunities will develop there.”
Nobody took Sun seriously then.
In July 2015, Ananth Krishnan wrote in The Daily Mail “Local officials in Yadong [Yatung] say a line running to the India border could transform the currently paltry $15million border trade, which relies on a small border market that is open from Monday to Thursday in Yatung.”
Krishnan then reported: “China has already upgraded the roads from Lhasa to Yatung. A 500km journey to the India border took Mail Today only seven hours.
Last year, in an article in the China Daily, Ma Jiali, a well-known Chinese ‘India expert’ and a researcher at the China Institutes of Contemporary International Relations explained that “a trans-Himalayan railway would be of great economic value as it could later connect China, the largest economy in Asia, with India, the continent's third-largest economy.”
But has India been consulted? 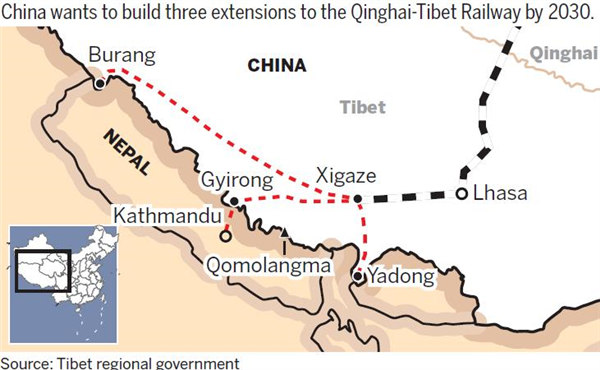 Surely not.
However Beijing seems decided to go ahead with the project of ‘connecting’ India.
Nepal, on its part, is more than willing to have “a convenient link to China because it believes that China's development will offer great opportunities for Nepal,” commented Jia last year (a map was then attached to the article).
It showed the train continuing its journey to Purang (Burang), near the tri-junction Nepal-Tibet-India and Yatung in the Chumbi Valley. The Purang leg will be a further step to connect Tibet and Xinjiang, through a railway line parallel to the Aksai Chin road (via the Indian territory).
The creation of Western Theater Command will make the process easier.
It would make two branches of the OBOR ending up at India’s gate.
The point is: can tourism alone justify the laying of a railway line to Yatung?
Certainly not.
The answer is somewhere else.
The raising of a Mountain Strike Corps on the other side of the pass?
Posted by Claude Arpi at 7:11 AM