The great economic and geopolitical asymmetry between India and China 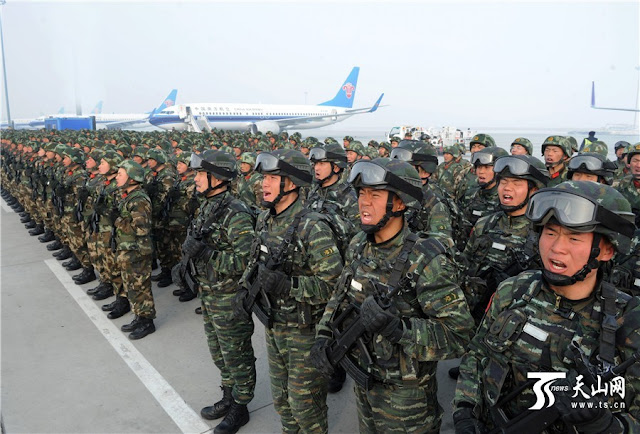 My article The great economic and geopolitical asymmetry between India and China appeared in The Daily Mirror.

At the end of the first round of the strategic dialogue between India and China co-chaired by Zhang Yesui, the Chinese Vice Foreign Minister and Jaishankar, the Indian Foreign Secretary, The Global Times commented in a paternalistic tone: “One lesson India may learn from China is to be honest with oneself. Asymmetry in economic and geopolitical power is natural for any bilateral relations.”
While the ‘asymmetry’ may be in China’s favour in many fields, there is one domain where India is far in advance on the Middle Kingdom; it is the people’s participation in the State’s governance through fair and open elections.

Police State
Though Indians elections may look ‘chaotic’ from Beijing, the process brings an obvious stability to India. This is absent in China, which is fast becoming a police State.
Take Tibet, a couple of weeks ago, it was announced that police dogs would be patrolling the streets of Lhasa. For the first time on February 16, the Public Security Bureau (PSB) used dogs in the Tibetan capital. According to China News Network, the dogs will “enhance the actual capacity and level of the Tibetan police force.” The same source reported that the dogs will patrol areas such as the Potala Palace Square, the Jokhang Temple or the railway station.
Some may tempted to say that a similar situation exists in the Kashmir Valley, but let us not forget that despite the constant incitation from the other side of the LoC, J&K has its own elected Government and Legislative Assembly, its own Constitution and even its flag. Would Beijing agree to offer this to the Uyghurs in Xinjiang or the Tibetans, the situation would certainly not be so explosive.
In January, the Chinese media reported that eight people were killed in a violent attack in Pishan county of Hotan Prefecture in Southern Xinjiang. According to the local Government, three knife-wielding men attacked and stabbed several people. Subsequently, the police shot dead the three attackers and ten others were injured. The Chinese media asserted: "Order has been restored and an investigation is ongoing. The identity of the attackers were not disclosed,” but they were obviously Uyghurs.
A few days earlier, Radio Free Asia (RFA) had reported that Uyghurs had been called to several meetings to confess their 'crimes'. According to RFA, this was part of a campaign called ‘Revealing Errors’; the meetings were held in Aksu Prefecture "to uncover behavior considered politically destabilizing.” The same source added: “Residents are called to a podium one by one to confess these errors after they have listed them on a 39-question form. They are also told they will face legal consequences if they attempt to cover up their own or anyone else’s anti-state activities.”
Does it not sound like the return of the Cultural Revolution?
Here, there is certainly a great asymmetry between India and China.
There are others: while during the Sino-Indian Strategic Dialogue, Beijing refused to make a step forward and support the UN ban on JeM chief Masood Azhar, however, China keeps complaining that it is threatened by Muslim fundamentalists. Is it not a contradiction? The fast development of the China Pakistan Economic Corridor (CPEC) may bring more trouble for Xinjiang as the State-sponsored terrorism in Pakistan is bound to percolate north.

Border Control
Associated Press (AP) reported that China was already “tightening border controls in its northwestern Xinjiang region amid rising terrorism threats.”
According to The China Daily, the crackdown “seeks to prevent suspected insurgents both from leaving Xinjiang to fight abroad and from returning to the region after receiving military training overseas.”
Beijing seems more and more nervous, especially ahead of the crucial 19th Congress, which may witness big political changes at the end of the year.
The situation in Xinjiang is so tense that the Chinese authorities have ordered all motor vehicles in Bayingol Prefecture to have mandatory satellite tracking devices installed. On February 4, the Bayingol traffic police announced via its Weibo microblog account: "Cars are the main transportation means for terrorists, and are also a frequently chosen tool to carry out terrorist attacks" All vehicles are required to install GPS connected to Beidou navigation satellite by June 30, "so they can be tracked wherever they go.”

Rising Unrest
But that is not all, on February 27, more than 10,000 Peoples’ Armed Police (PAP) paraded in the streets of Urumqi, Xinjiang’s capital. The authorities spoke of a rapid-response system to quell unrest. During the rally, helicopters hovered around the city, while armored vehicles threateningly patrolled the streets of the capital. It was the fourth such massive display in one year. On the occasion, Xinjiang's Party Secretary Chen Quanguo told the PAP that they must realize the ‘grim conditions’ facing the region; he ominously told the police to: “bury the corpses of terrorists and terror gangs in the vast sea of the people's war.”
Chen also dispatched 1,500 PAP to the ‘frontlines’ in Kashgar, Hotan and Aksu, not far from the Indian border.

Border Control
For Beijing, the present show of force in Xinjiang goes along with the strengthening of China’s border defence; the Western Theater Command facing India is of great concern for Beijing. It was recently announced that Beijing has started building a second highway between Tibet and Xinjiang, linking the National Highways 219 (cutting across Western Tibet and the Aksai Chi) and 315, running towards Qinghai province (via the ‘nuclear’ sites in Lop Nor). When completed, it will be a big game-changer for Xinjiang and Tibet and here the asymmetry is clearly in favour of China.
Is India prepared to take on this new challenge?
Posted by Claude Arpi at 6:08 PM