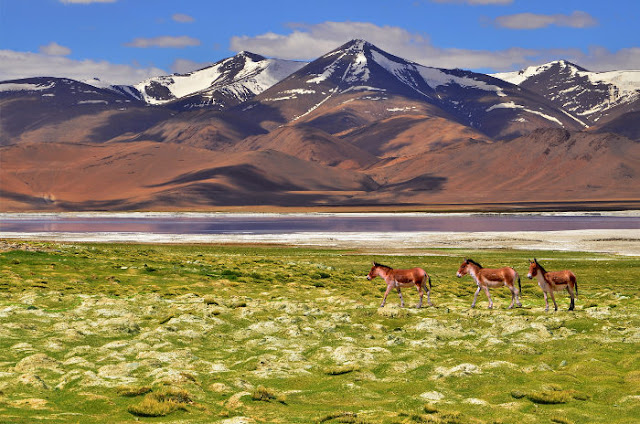 The Changthang or ‘Northern plain’ (in Tibetan), occupies a large part of the Tibetan plateau.
In April 2000, with the approval of the State Council, the Changthang National Nature Reserve, located in northern Tibet, south of the Kunlun Mountains, became a national reserve.
It spreads on a total area of 391,200km, which makes it the second largest nature reserve in the world, after the Northeast Greenland National Park.
With the recently-established adjoining reserves, there is now a total of 496,000 km2 of connected Nature Reserves.
The Changthang National Nature Reserve lies at an average elevation of 4,500 meters. Administratively, it comes under the Prefectures of Nagchu and Ngari. Some parts of the Reserve are located in the County of Rutok, bordering Ladakh and the Aksai Chin.
Only a few Tibetan nomads permanently live there, but it is a paradise for wild animals such as wild yak (Bos grunniens), Tibetan wild ass or kiang (Equus kiang), Himalayan blue sheep or Bharal (Pseudois nayaur), Argali (Ovis ammon), Mongolian gazelle (Procapra gutturosa) and Tibetan antelope or chiru (Pantholops hodgsonii). The list of predators is also long; it includes snow leopards (Panthera uncia or Uncia uncia), Tibetan wolves (Canis lupus chanco), Turkestan lynx (Lynx lynx isabellinus) and Tibetan blue bears (Ursus arctos pruinosus).

Here some extracts of the Chinese documents (please excuse inexactitudes; it is a translation through Google language).

I.    Overview of construction projects

The Overview provides an idea of the route followed by the new highway starting from Xinjiang (near Dunhuang? Crescent Lake?) and joining the G 219 (the Aksai Chin road) in the Rutok County.
The Highway will be connecting Xinjiang and Tibet via Minfeng, it should ultimately connect with the Highway G 216 in Xinjiang.
The project is 558 km long.
The deeply-worrying aspect of the project is that it crosses the highly eco-sensitive Changthang National Nature Reserve.
It will run for 110 km in the main reserve, about 270 km in the buffer zone and some 100 km in the ‘experimental area’.
The starting point of this project is the Jieze Lake near the G 219 highway (north of Rutok).
According to the EIA, the road will be built “in accordance with the two-lane highway construction.”
The total investment for the project is RMB 6.453 billion (more than 1 billion US dollars). The construction should start by the end of the current year and the road will be put into operation early 2021. The construction period has been estimated at 48 months.
The main environmental impact assessment says:

1- During the construction period 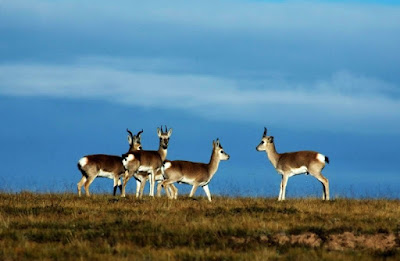 2 -After the construction period
3 - The preliminary conclusions of the EIA report are:
The proposed project is in line with the National Highway Network Plan (2013-2030). The route selection takes full account of the economic, environmental and technical feasibility principles.
It is line with the strict implementation of the ‘three simultaneous’ system, respectively, for the ecological environment, water environment, atmospheric environment.
It takes effective protection measures, will effectively control the adverse environmental impact of roads, along the area to promote economic and social development [of the area]
The project is considered to be viable from the perspective of environmental protection under the premise of obtaining the forest assessment and the biodiversity evaluation report and obtaining the approval of the related project of forestry department.

4 - Seek public views on the main issues
In order to listen to the views and suggestions of the community on the environmental protection work of the national highway 216 (Tibet border) and the 'rebuilt' section of the highway, the project will be publicized to solicit the public's valuable opinions and suggestions.
The main issues include: whether you are aware of the construction of this project; after the completion of the project, your views on the surrounding environment and the impact on your working life; your views and suggestions on environmental protection work.

Implications for India
This of course does not deal with the strategic implications of the new road which should shorten the time to travel from Urumqi to Rutok (near the Indian border).