As soon as China recovered from the dreaded Covid19, it started a new battle, an Information Warfare (IW) to change the way the world presently perceives the Middle Kingdom. In the process, Beijing found it sometimes necessary to show force, and the recent incident in Northern Sikkim and in Ladakh should be seen in this perspective.
Since the outbreak of the virus in December, the Communist regime discovered that it had not many friends on the planet. Even Vladimir Putin was targeted by Beijing asking the Russian authorities not to discriminate against Chinese citizens; reports had appeared of police raids in Moscow against people from China evading quarantine measures.

The IW counterattack
Soon Beijing decided to counterattack. Zhao Lijian, one of China’s sharp shooters and now a spokesperson of the Ministry of Foreign Affairs, alleged that the Americans were at the origin of the virus.
Another shot came from the Chinese Embassy in Australia who emailed local journalists, accusing them of “politicizing the coronavirus” by saying it originated in China “without any supporting facts.”
Financial Review journalist Michael Smith received an email from the Chinese embassy in Canberra, complaining that he had called the Covid-19, ‘China virus’. Smith asserted that Beijing “has pivoted its propaganda narrative, now insinuating that the virus originated in other countries.”
Later the Chinese ambassador in Australia threatened Canberra: “If you push for an inquiry into the Wuhan lab, we will stop buying your wine”.
The strong-arm technique is a bit gross, but it often works.
The symptoms of the Chinese aggressiveness were also seen on February 18 when Hou Yanqi the Chinese ambassador to Nepal, issued a statement criticizing an article published in the Nepali press: “The Kathmandu Post published an article which, with a picture of malicious intention, deliberately smeared the efforts of the Chinese government and people fighting against the new coronavirus pneumonia and even viciously attacked the political system of China.” The lady ambassador went a step further; she accused by name the chief editor of The Kathmandu Post, Anup Kaphle of being biased.
Examples could be multiplied.

Aggressiveness everywhere
China has not limited the ‘battle’ to the diplomatic field alone; the People’s Liberation Army (PLA) has become aggressive on the ground too.
The recent ‘fights’ in Northern Sikkim and Ladakh are part of the same pattern.
It is a fact that in 2017, despite the conflict at the trijunction between India, Bhutan and China, the Northern Sikkim border was ‘settled’.
In these circumstances, it was rather surprising that Indian and Chinese soldiers recently exchanged blows south of Naku La (pass).
Quoting two senior officials on the condition of anonymity, The Hindustan Times explained: “Scores of Indian and Chinese soldiers were involved in a tense face-off along the India-China boundary in north Sikkim.” In the scuffle several jawans were injured: “Four Indian soldiers and seven Chinese troops suffered injuries during the confrontation that involved around 150 soldiers.”
The confrontation took place south of Naku La, the border pass in the sector and north of Muguthang, a place that China has tried to capture since some time (where incidentally a helicopter of the Indian Air Force had crashed at Dolma Samba), not far away in the same sector, two days before the ‘fight’).
Around the same time, worrying developments were reported from the Northern Ladakh.

The Northern Boundary of Sikkim
The boundary with Tibet (now China) in northern Sikkim can be roughly divided in two parts; the eastern part is delineated by 23 cairns which were erected by Claude White, the British Political Officer (PO) in Sikkim in 1905. Apart from one cairn, known as the ‘Finger’, there is no real difference of perception between India and China. The second part, the western part of Sikkim’s northern border has remained peaceful, as it follows the watershed and is of extremely difficult access (at least for India), with only one pass Chorten Nyima leading to Tibet.
Naku La and Muguthang, a few kilometers south of the pass, are between the western and eastern parts of the boundary.
It is here that Beijing is picking a fight.

Claude White’s Description
Claude White visited the area in 1902, he noted: “I proceeded first up the Naku Chu [river] to the Naku La [pass]. Near the top of the pass, on one I found the usual Tibetan wall, rather better built than is customary, running across the valley with a block-house on the east, and some smaller blockhouse on a ridge coming down from the east. The top of the pass is long, wet and swampy with several lakes. On the way up some very large mineral springs were met with, and sample bottles of each have been sent down to the Chemical Examiner for analysis. This water contains sulphuretted hydrogen, and apparently contains sulphur and iron in large quantities.”
The Chinese would like today to consider the wall as the border; it was built by the Tibetans to protect their pastures in the 19th century; a process often used in the Himalayan region. The wall was similar to a Mani wall (a stone wall with engraved mantras Om Mani Padme Hum); the wall was 5 feet in height and some 800 meters in length. Beijing seems to have decided that the wall was the customary border, neglecting the watershed principle to which they earlier adhered.
The problem for India is that the access to these places is extremely difficult; Muguthang for example is still not connected by road. For several years, the Chinese have tried to ‘realign’ the border; but their claims clearly violate the 1890 Treaty, based on the watershed principle, which they swear by.
If Beijing wanted to put pressure on India, the pass is a convenient acupuncture point and if India gives in, more puncture points will be activated in Ladakh, Barahoti (Uttarakhand), Asaphila (Arunachal Pradesh) and other remote places.
When in June 1902, White went to Northern Sikkim, he met some Tibetan representatives at a place called Gyagong and later at the Naku pass; according to the memoirs of Sir Francis Younghusband: “Mr. White told them that his orders were to lay down the boundary as shown in the Convention of 1890, which had been signed by the Chinese Amban on behalf of the Tibetans.”
The Tibetans did not accept a treaty concerning their country to which they were not a signatory; but Younghusband wrote: “White told them they could see for themselves if the water ran into the Sikkim Valley or into Tibet, and where the water parted into Sikkim and Tibet was the boundary.”
Since then, the top of Naku La (pass) has remained the border.
On July 5, 1905, White had suggested to the Secretary of the Foreign Department in Delhi to erect pillars to mark the border; inter alia, the PO observed: “The number of pillars required would be only ten — one on the Naku La, one on the Sebu La, and eight along the remaining northern boundary from near the Sebu La to Kangchung La,” he added: “There is no necessity for any pillars along the western portion, as it is an inaccessible ridge.”
Probably due to the difficult access, it was found unnecessary to erect a pillar at Naku La, but 23 cairns were built eastwards. The Chinese are today using this historical loophole to open a new front on the Line of Actual Control (LAC).

Why Now?
One could ask, while the issue has been simmering for a few years, why such renewed aggressiveness now? Why is China opening new fronts?
One, in the post-COVID-19 (for China at least), IW is central to the role Beijing wants to play in the world.
As a result, the PLA is bound to be more aggressive on the Indian borders as they may not get their ‘dues’ with the general crunch for funds in Beijing, as a result, their budget will probably be heavily curtailed.
They have to be assertive to be not ‘forgotten’ by the Communist leadership.
Further, it is important to understand that while the terrain is extremely hostile on the Indian side, particularly in the western part of this sector, on the Tibetan side, Kampa Dzong (county) is on a flat plateau; it is where heavy Chinese PLA deployment is now taking place.
According to the website China Defense Blog, the Chinese-made ZTQ-15 light tank is used by the 54th Heavy Armor Combined-Arms Brigade in the Tibet Military Area Command. The new tank is said to have arrived in Kampa Dzong; this could be a game changer.
Another example of Beijing’s new assertiveness: ahead of a crucial Nepal Communist Party meeting, Hou Yanqi, the Chinese ambassador in Kathmandu, held a series of meetings with senior Nepal Communist Party leaders; she blatantly interfered in the ongoing power battle within the ruling party.
Coincidentally, Nepal objected to the new Indian road leading to Lipulekh, the border with China. Kathmandu said that the road is on Nepali territory, forgetting that when Nepal and China signed a border agreement in 1961, a map showing the Kali river, the border, at the same location than on the Indian maps, was published. It is unfortunate, but the NCP leaders are today dictated to by Beijing about what to do or say.

All this together, does not augur well for the coming summer months. 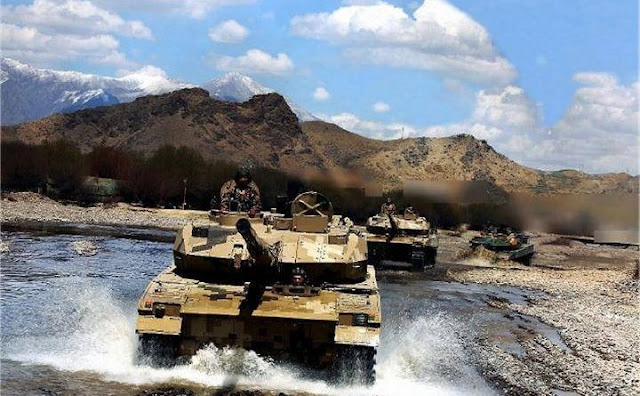