International media reported last month that Tibet would be closed to foreigners for 5 weeks, till the end of March.
CNN explained: “The closure has been an annual occurrence since 2008 when the Tibetan capital Lhasa was rocked by riots linked to the anniversary of an uprising against Beijing rule. Authorities have also stopped issuing travel permits to foreign travelers at short notice during periodic unrest.”
At the same time, according to The China Daily, “Tibet hopes to become a top global destination.”
The Chinese daily asserts:


In a bid to attract more tourists and become one of the world's top destinations during the next five years, the Tibet autonomous region would like to shorten the time it takes to issue travel permits to foreigners. Currently, foreign travelers need Tibet travel permits to tour the region, in addition to a Chinese visa.

The Communist publication rationales the new craze for the Roof of the World, which is


based on Tibet's unique ethnic traditions, cultural heritage, reception capacity and ecological protection needs. Without the permits, which must be applied for through an authorized travel agency, foreigners can't board a flight or train to Tibet.

This is called a contradiction …with Chinese characteristics.
Visitors are banned to visit to Tibet for several weeks, but they are welcome…

Hong Wei, a deputy director of the Tibet Tourism Development Commission and a member of the Tibet delegation at the National People's Congress (NPC) affirms:


Tibet will be more open to domestic and foreign tourists in the next five years. We will simplify the procedure for foreigners to obtain travel permits and cut the waiting time.

Padma Choling, the TAR’s Deputy Secretary (the senior ethnic Tibetan in Lhasa) clarified that Tibet had no plan to completely abolish permits for foreign travelers “because its natural environment is complicated and the purpose of the permits is mainly to ensure the safety of the travelers.”

It is indeed complicated
During the same press conference at the NPC, Li Yiqiang, the deputy director of Shannan (Lokha) Prefecture stated that the number of foreigners visiting the prefecture in 2015 increased by more than 30 percent over the previous year. "Allowing more foreign visitors to come to Tibet can help the locals out of poverty by getting them involved in providing tourism services."
With 20 million Chinese visiting the TAR in 2015, a few foreigners more or less, will not make a difference in term of revenue for the regional government.
But a few 'selected' foreign tourists could make a difference in terms of ‘image’ for the Party's propaganda.

The Sichuan-Tibet Railway
Regarding the new railway line between Lhasa and Chengdu, already reported on this blog, Padma Choling promised that “Tibet's environment will not be damaged by the construction of a second railroad linking the remote area to the rest of China.”
He affirmed:


Tibet is a highly sensitive spot, not just because of continued opposition by many Tibetans to Chinese control, but because of its strategic location next to neighbors India, Myanmar and Nepal. …The ecological environment of Tibet will not be harmed. The railway will be well built under the condition of environmental protection. That is for sure.

Reuters presented the other side of the coin: “Exiled Tibetans and rights groups also say the first railway has spurred an influx of long-term migrants who threaten Tibetans' cultural integrity, tied to Buddhist beliefs and a traditional herding lifestyle.”
All this is of course denied by Beijing.

India is concerned
India is however concerned by the proximity of the line (this was discussed 2 years ago on this blog) from the McMahon Line.
Padma Choling rejected such fears: “No matter whether it takes 15 hours, or however long, to reach the border, the border belongs to our motherland," he added: "We Tibetans have the responsibility to guard it well."
Lobsang Gyaltsen, the TAR Chairman and No 3 in the Party hierarchy in Tibet affirmed that the planned Sichuan-Tibet railway will help bring more tourists and opportunities to Tibet.
During the annual session of the TAR Regional People's Congress in January, he had declared that “China will accelerate the construction of the 1,629-kilometer Sichuan-Tibet railway” and that it should start in 2016.
In fact it has started more than a year ago.
According to the region's 13th Five-Year Plan (2016-20), nearly 1,000 km of it will be laid in Tibet; the construction of the western and the eastern sections began last year.
The whole project is expected to be completed in the early 2030s:

Gyaltsen noted that the Sichuan-Tibet railway will significantly improve people's livelihoods along its route.
As mentioned in an earlier post, soon 100 million Chinese will soon travel to the Roof on the World every year.

India's borders
More disturbing, Tibet will now streamline the procedure for Chinese people applying for passes to visit border areas: “Tibet shares a border of more than 4,000 kilometers with countries including India, Nepal and Burma. More trade routes will be built between Tibet and its neighbors in the future,” says the China Daily.
What does it mean?
Tourists will be allowed to visit the LAC in Ladakh and the border in Himachal or the McMahon Line in Arunachal? 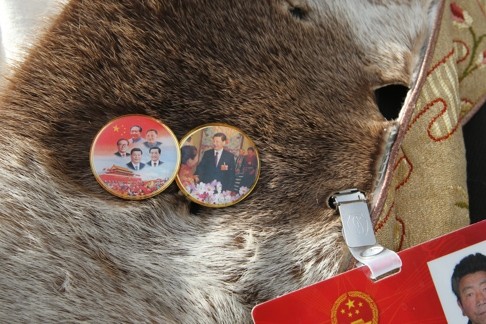 New Ximania
Another topic: all the NPC’s deputies from the TAR each wore two badges when they attended the opening session of the legislature on March 5.
Internet users always quick to react; they commented that it looks like “a return to the cult of personality crafted by Mao and employed during the violent Culture Revolution.”
According to the Caixin newspaper: “One badge showed a smiling Xi Jinping, head of the Communist Party, talking to a Tibetan woman. The other showed the busts of Xi and his four predecessors as top leaders of the party and country, Mao, Deng Xiaoping, Jiang Zemin and Hu Jintao. The [Chinese] flag of China appears in the background of the second badge.”
Kelsang, a deputy from Lhasa explained that the delegates “got the badges last year on the 50th anniversary of the founding of the Tibetan Autonompus Region”. They apparently kept them preciously since the.
Kelsang said the deputies decided to wear the round pins at this year's ‘Two Sessions’. She added that the delegates wanted to wear the pins to show their gratitude to the party's top leaders for the changes made in Tibet.
Kelsang praised the Party and said: “Posters similar to the two badges are now hanging in every office, home and public squares in Tibet."
Caixin remarked that the badges are similar “to ones worn during the Cultural Revolution, [it was] a reminder of a period that saw the country brought to the brink of collapse.”
Someone on Sina Weibo, China's Twitter noted that China has moved since then "We should never allow the worship of an individual to become a fashion again," he wrote.
Another blogger commented: “If they are not told to stop doing this, other delegates could follow suit next year.”
But ‘Follow Comrade Xi’ if fashionable this season.
How long will it last?
Nobody is sure.
Posted by Claude Arpi at 6:36 PM