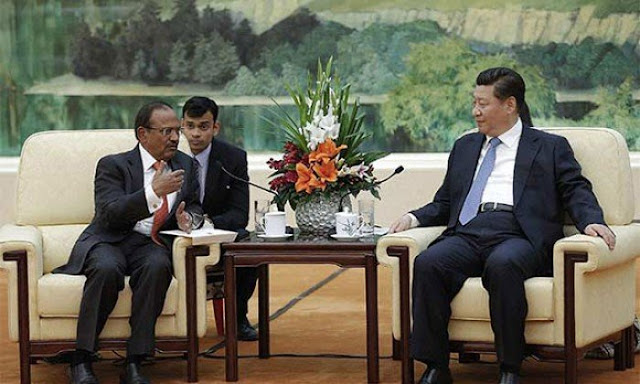 According to this article, Chinese Foreign ministry spokesperson Hua Chunying declared: “The Chinese side holds a consistent and clear position on the eastern section of the China-India boundary: Arunachal Pradesh is a part of Southern Tibet.” Unfortunately, the Indian side does NOT hold a consistent and clear position on the eastern section of the China-India boundary, the Indian Government's verbal claims notwithstanding. The Indian Government's actions speak MUCH louder than its words: with National Security Advisor Doval's clear assent, the Indian Government continues to obediently pursue its policy, begun under the previous Manmohan Singh's government, of kowtowing to China's demands that MIA recovery ops in Arunachal Pradesh not be permitted. This policy by the Modi Government is an implicit concession that China has a right to insist that MIA recovery operations in Arunachal not be permitted, making a ridiculous mockery of Indian Government statements asserting that Arunachal is an "integral" part of India. No wonder the Chinese continue to press their claims on Arunachal: seeing how amenable the Indian Government is to these demands of theirs, they must be laughing at India's "integral part" statements, knowing how empty they are. These statements, they must be concluding (with justification), are purely for Indian domestic consumption, and not intended by the Indian Government to be taken seriously by the Chinese leadership. ..Gary Zaetz, Founder and Chairman, Families and Supporters of America's Arunachal Missing in Action