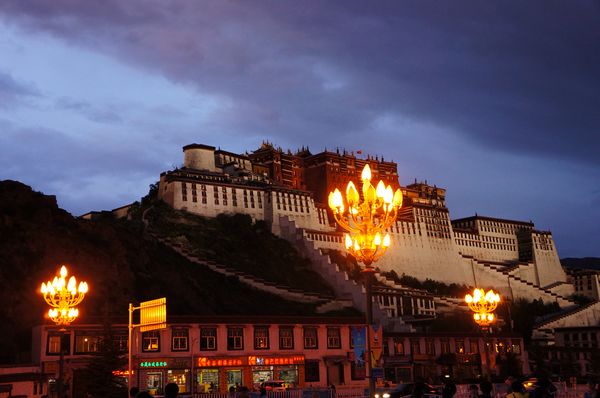 Yesterday, I wrote about the “Measures to Determine Qualification and Employment of Religious Instructors in Tibetan Buddhist Monasteries”, published in December 2012 by the Chinese government.
One of the reasons why Beijing has promulgated these 'Regulations' is because the Communist regime plans to make of the Tibetan Autonomus Region a mega tourist park.
A recent report from Radio Free Asia speaks the ‘Disneyfication’ of Lhasa.
It mentions the 'rebuilding' of the Bakhor in Central Lhasa:


Meanwhile, despite similar online campaigns by overseas rights groups against the U.S.$244 million renovation of Lhasa’s Barkhor district, the U.S.$2.44 million renovation project has been completed, China’s state media reported Monday.
More than 100,000 people had signed a petition by New York-based Students for a Free Tibet calling for a halt to the renovation, and a blog post by Beijing-based Tibetan writer Woeser titled “Please Save Lhasa” went viral on China’s microblogs before being removed.
“Lhasa is being destroyed by excessive commercial development,” Woeser said in the May post, which reported that plans for the city also include the development of a 150,000 square meter (1.6 million square feet) shopping mall in the Barkhor, with residents and shopkeepers being relocated.
Last month more than 100 Tibet experts sent a letter to Chinese President Xi Jinping and UNESCO saying renovation and new projects in the city were destroying traditional architecture and transforming the Jokhang Temple and the Barkhor into a “superficial tourist spot.”
State media have said the Barkhor renovation project is aimed at modernizing outdated infrastructure by upgrading the sewage system, water supply, and electric lines.
UNESCO has included the Jokhang Temple—considered the most important temple in Tibet—as well as other parts of Lhasa including the Potala Palace—home of Tibetan exiled spiritual leader the Dalai Lama—on its list of World Heritage Sites.
The temple has been a symbolic center of Tibetan protests against Chinese rule in Tibet and the Barkhor was a center of Tibetan unrest in 2008 that left at least a dozen people dead.

The story of Shaolin Temple is telling. Ticket sales alone brings US $ 24.4 million a year in the coffers (the dispute mentioned below is about which coffer should the god-send hard cash benefit).
Party's officials lecture the monks "What's the use of so much money for you monks that should do no more than reciting your sutras?"
The monks would obviously like to have the major piece of the cake as they are the ones who are photographed by the tourists.
Rumors say that the temple was going to be listed on the stock market.
Tibet is witnessing a 'shaolinification' on a much larger scale.
China Tibet Online reported yesterday that the Tibet Autonomous Region witnessed a new tourist boom in the first half of 2013, 'before the approaching peak season'.
According to the statistics provide by the Tibet Tourism Bureau, tourist arrivals reached a record high of 3.43 million bringing some US $ 500 millions in revenues. Can you imagine, and this during the lean season?
In the first half of 2013, the number of tourists visiting the region increases 21.8 % compared to last year and the revenue showed a 32.1 % growth.
Xinhua explains: "In recent years, Tibet tourists increased year by year thanks to improved transportation and tourism infrastructure. To attract more tourists to Tibet and ensure their health and safety, the regional government has launched its first 'altitude sickness insurance' against Tibet’s special geographic environment."
More than 15 millions Chinese tourists are expected in Tibet by 2015, and this for a local population of hardly 3 millions.
Here again, China is 'far in advance' on India and Uttarakhand in particular. But it would perhaps be wise for the Chinese leadership to study what has recently happened in the Indian Himalayas. 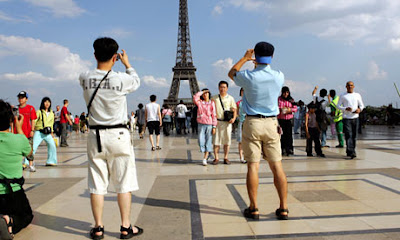 Another issue is the attitude of the Chinese tourists who are said to be very rude. South China Morning Post carried an article on how Chinese tourists are misbehaving. It remained for weeks on the top of the most read features.
In the meanwhile, France, one of the world's major tourist destinations for Chinese tourists, has issued advisory information on how to deal with Chinese tourists: "A simple smile and a greeting in their language satisfies them completely," the guide issued by the Regional Tourism Council of the Paris Chamber of Commerce says.
Just say 'Rouanne ing gouang linne' to the Chinese visitors, they will melt.
The notes explains the habits of the one million Chinese visiting Paris every year: "They are avid shoppers of luxury brands. They are picky about food and wine. They appreciate ingenious shopping suggestions".
'Do You Speak Touriste?', the guide (for 10 different nationalities) in helps particular the poor Parisian hoteliers and taxi drivers to deal with the Chinese tourists.
Of course, this problem does not occur in Tibet where the local population has no choice by to speak Chinese. 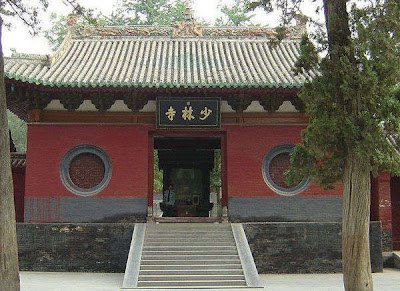 Hidden cameras found in abbot's bedroom
Shanghai Daily, July 15, 2013
Surveillance cameras have been found in the abbot's room at Shaolin Temple, with one pointed at the abbot's bed.
An employee told yesterday's Economic Observer they were discovered during renovation work.
It's not known who installed the cameras but the employee believed there could be a link with disputes over the temple's growing popularity as a tourist attraction.
The temple in Dengfeng City in central China's Henan Province is renowned as the birthplace of kung fu.
Whenever there are disputes between the temple and other parties, rumors fly, the report said.
In 2011, it was said that Abbot Shi Yongxin had a mistress who was a student at Peking University and that he had US$3 billion deposited overseas. The mistress and an illegitimate son were said to be living in Germany.
A temple spokesman said later the rumor was not worth responding to.
It had spread after a city government bid to demolish a temple courtyard to build a hotel was foiled shortly before demolition started.
The lion's share of profits evolving from Shaolin Temple go to the local government, the report said.

Monks protested
Ticket sales alone amount to about 150 million yuan (US$24.4 million) a year, with the government taking 70 percent.
Sometimes the government delayed giving the temple its share, and Shaolin monks protested about that at the government offices. However, the temple was accused of being "too commercialized." Officials were reported to have said: "What's the use of so much money for you monks that should do no more than reciting your sutras?"
There was also a rumor that the temple was going to list on the stock market, something Shi has denied many times.
Shi is also said to have displeased the city government by taking center stage in group photographs with important visitors. Upset officials are said to have complained that Shi "didn't have the sense of ceremonial rules."
When gifts were presented to visiting officials, Shi waited for them to come forward. But some officials believe Shi should come forward to present the gifts in a respectful way, the report said.
When Russian President Vladimir Putin visited the temple in March 2006, a provincial government official tried to put his seat at the same level with Shi, who was receiving Putin, but was stopped by one of Putin's bodyguards.
There are many people keen to cash in on the fame of the temple, the report said. Some companies registered trademarks including the word "Shaolin," for example, and various competitions such as a "Kung Fu Star" contest and a beauty contest were held near the temple. Kung fu training schools named after the temple were also being established.
The report said there had been many disputes since the Dengfeng government got together with China National Travel Service (HK) three years ago to develop the temple into a tourist destination.
To attract more investment, the local government gave up its controlling stake in the scenic area of the temple to the travel service at a low price. In return, the travel service was to invest in construction projects while expanding tourism.
However, over the past three years it had made huge profits from the temple's tourism industry but hadn't invested in any projects, the report said.
Posted by Claude Arpi at 7:59 AM