The story of the Buryat Lama whose body was preserved as if it was mummified, with soft muscles and skin and folding joints, made me think of the new 'regulations' imposed by the Chinese Communist Party to appoint religious instructors in Tibet.
The Tibetan Center for Human Rights and Democracy reported that "to further tighten the noose around Tibetan monasteries and nunneries, the Chinese government has implemented a new regulation that gives the government and Party organs at multiple levels the authority and power to appoint Buddhist religious instructors."
It is called “Measures to Determine Qualification and Employment of Religious Instructors in Tibetan Buddhist Monasteries”. It was published on December 3, 2012 with the approval of the Buddhist Association of China (BAC).
From now on, all religious instructors in monasteries in Tibet must be legally registered to continue teaching Buddhist scriptures (Article 2).
Further the regulation states that to qualify as a religious instructor, a candidate must meet mandatory credentials, including support for the leadership of the Chinese Communist Party and the socialist system, patriotism, discipline, uphold the dignity of law, safeguard the people’s interests, safeguard national unity, and uphold religious and social harmony [Article 4 (ii)].
A candidate must not engage in activities organised at the behest of private individuals or overseas outfits [Article 4 (vi)] and must obey the Monastery Management Committees [i.e. representatives of the Party]. Monks and nuns as well as lay believers must accept the guidance and supervision of the local people’s government and relevant departments of Buddhist religious affairs [Article 4 (iii)].
Article 5 requires that candidates be nominated and recommended by Monastery Management Committees. Then the candidates’ credentials will be assessed and reviewed first at the county level BAC office. This is followed by another assessment and screening at the prefecture level of BAC. Shortlisted candidates must sit for an examination administered by prefectural branch of BAC.
Small mercy: Buddhist teachers who are over 50 years old and have been teaching for a considerable time, may be exempted from this examination provided they satisfy all the credentials listed in article 4 [Article 4 (iii)].
Beijing can't afford to create to much upheaval (or chaos in Chinese parlance) in the hierarchy of the Tibetan clergy.
Article 10 stipulates that religious instructs appointment can last no more than five years after which they must apply for renewed employment. Those seeking re-appointment should undergo the same process of getting clearance and approval from the relevant BAC offices and local religious affairs departments.
Qualified religious instructors should assist the Monastery Management Committees in the management work of education and guidance of monks and nuns, patriotism, unity and progress, maintaining 'normal order' [read Party's order] in monasteries, promotion of religious harmony and social harmony [Article 11 (iii)].
The religious instructors are also required to promote national policies and regulations to guide the masses of believers, consciously safeguard national unification, ethnic unity and social stability, and oppose separation [Article 11 (iv)].
Some of the activities which will be awarded immediate dismissal or suspension from employment are listed in article 15:
My question is: would someone like the Hambo Lama Itigelov passed the BAC's test? I doubt.
And what about realized masters like Dilgo Khentse Rinpoche, Dudjum Rinpoche, Sakya Pandita, Milerepa or Je Tsongkhapa made it.
Probably not, their level of theoretical Marxism was too low.
The Regulations are killing 'Buddhist knowledge', to replace it by Party's discipline.
It is how China is destroying social stability and ethnic diversity. 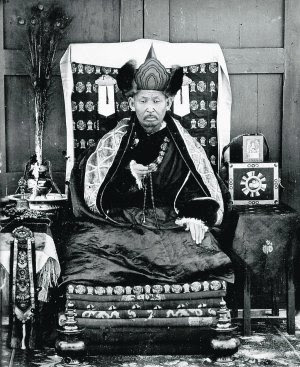 Buddhist Monk Who Died in 1927 is ALIVE
May 28, 2013
Moscow, Russia — “Exhumation of the body of Hambo Lama Itigelov took place September 10 th, 2002 on the territory of cemetery near the city of Ulan Ude (Russian Federation). He died and was buried in 1927 and the exhumation was performed in presence of relatives, officials, and specialists”.
This was the information that appeared in Russian mass media regarding Buryat Lama who was exhumed from the grave in the beginning of the 21st century. The grave contained a wooden box and there was a sitting Buddhist lama in ‘lotus’ pose. His body was preserved as if it was mummified, however it was not. Soft muscles and skin, folding joints. The body was covered with silk clothes and fabric.
Hambo Lama Itigelov is a real person quite well known in Russian history. He studied in Anninsky Datsan (Buddhist university in Buryatia, nowadays there are ruins only) and obtained degrees in medicine and philosophy (on the nature of emptiness), he created an encyclopedia of pharmacology.
In 1911 Itigelov became a Hambo Lama (the head of Buddhist church in Russia). During the period from 1913 till 1917 he participated in social actions of the Tsar, being invited to 300-year anniversary of Romanov’s house, opened the first Buddhist temple in St. Petersburg, and Nikolai II gave him St. Stanislav award on 19 th of March, 1917.
During the First World War Itigelov created and inspired the organization called “Buryat brothers”. He was helping the army with money, meals, clothes, medicaments, he also built a set of hospitals with lama doctors helping wounded soldiers. For that he got St. Anna award and others.
In 1926 Itigelov advised the Buddhist monks to leave Russia, since ‘the red teaching was coming’ (Itigelov himself never left Russia). In 1927, being 75, he told lamas to begin meditation, since he said he was preparing to die. Lamas did not want to perform this meditation because Itigelov was still alive. Thus, Itigelov began to meditate by himself, lamas joined him and soon he died.
Ititgelov left a testament where he asked to bury him as he was, sitting in lotus pose in the cedar box on traditional cemetery. It was done. There was also a statement, where he asked other monks to exhume him after several years. (This is the exciting point – this means he knew that his body would be preserved).
This was done in 1955 and in 1973 by Buddhist monks but they were scared to tell everybody about this, since communist regime did not leave any space for religion in society. Only in 2002 the body was finally exhumed and transferred to Ivolginsky Datsan (a residence of today’s Hambo Lama) where it was closely examined by monks and, which is now more important, by scientists and pathologists.
The official statement was issued about the body – very well preserved, without any signs of decay, whole muscles and inner tissue, soft joints and skin. The interesting thing is that the body was never embalmed or mummified.
Two years passed. Itigelov’s body is now kept open air, in contact with other people, without any temperature or humidity regimes. How Itigelov keeps this condition, nobody knows.
While similar stories exist throughout the world, this is the ONLY WELL-DOCUMENTED and CONFIRMED CASE OF IMPERISHABLE BODY throughout the whole world. Embalming and mummifying is well known among different nations and peoples – Chili (Chinchora), Egypt mummies, Christian Saints, communist leaders and others. Some bodies were found in permafrost, however when they contacted with oxygen atmosphere they perished within several hours.
However, there are descriptions of such things in Buddhist texts, but there are no confirmed examples. Well, now there is.
For two years after the exhumation of Itigilov’s body it does not perish nor decay, no fungus, no negative things happen to it. Itigelov said before he died that he left a message to all peoples on Earth. This message contains no words. Now it is our turn to understand it.
Posted by Claude Arpi at 7:22 AM