1962 and the McMahon Line Saga: a book review 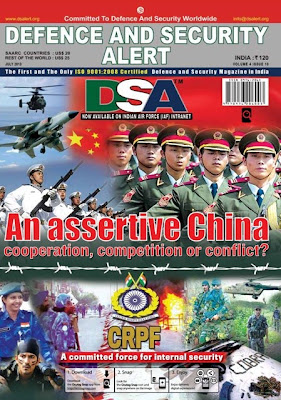 My book 1962 and the McMahon Line Saga has been reviewed by Prof P.M. Kamath in the July issue of the Defence and Security Alert.

1962 AND THE MCMAHON LINE SAGA

China is an extremely fascinating country and so are the Chinese people. Naturally, China provides so many challenges to researchers to explore unexplored areas and issues. Of the several such issues one issue of ever growing interest is Chinese aggression against then a newly independent and a developing country, like India was in October 1962. While that interest was there to study India China war debacle, it has grown in many folds since the nation went through in October 2012 fiftieth year — not a golden jubilee, but a “Black Jubilee”.
Claude Arpi – a French national living in India, has been writing extensively on China, Tibet and Europe. What I have noticed in his scholarly writings, is his abilities to see a foreign / security policy from a domestic political perspective. It is not uncommon for a foreign/security policy maker to use an issue some times to enhance his political power or divert attention of people from his domestic problems.
In this book, the author, after tracing the history of British efforts to open up to Tibet, discusses at length  the origin and implementation of McMahon Line, discusses at length his thesis that Sino-Indian border war was largely a result of Mao Zedong’s effort to reassert his fullest control on policy making towards India.
Though, Indian security establishment then did not know, 1962 was, as author says, a turning point for Mao, who was “depressed over the agricultural crisis and angry with the party elite … he was less able to work his will …was in temporary eclipse, spending most his time in bed.” In January 1962 at a 7,000 cadre conference, Mao came under attack; as a result, decided to temporarily retire. But as the author says: “By the Fall of 1962, Mao would return with a bang. The conflict with India was closely linked with his comeback.”
By September 1962 Mao was in complete control of India policy. India’s swift takeover of Goa, according to some, had its impact on Mao’s thinking. In this background, there was an increased Chinese pressure on India to negotiate. In the absence of Indian readiness to negotiate, on 6 October, China decided to go to war. Chinese then got accurate intelligence that Indians are planning to attack on the Thagla Ridge on 10 October. Mao, then had said: “It seems like armed coexistence won’t work … Nehru really wants to use force … He always wanted to seize Aksai Chin and Thagla Ridge.” He recalled: “We fought a war with old Chiang [Kai-Shek] … fought a war with Japan … one with America … we cannot lose ground … it would be tantamount to letting
them seize a big piece of land … Since Nehru sticks his head out and insists on fighting, for us not to fight with him would not be proper. Courtesy emphasizes reciprocity.” Yes, Nehru and his close advisers, who created a scenario to fight Chinese, without any military, strategic planning on the assumption that China, would not fight with India. You do not fight a war, what China described as a ‘massive attack’
as the author rightly says with “total lack of preparedness of the troops in terms of armament, ammunition, clothing and food supply. Some senior officers in the Army Headquarters in Delhi may have dreamt to ‘throw out the Chinese or take ‘the Thagla Ridge’ but it was a pipedream only.”
All this was done in the name of protecting the McMahon Line drawn by Henry McMahon to define boundaries between British India and an independent Tibet—with Chinese representative participating. Krishna Menon as Defence Minister did not take the trouble to protect McMahon Line in the west when Chinese occupied Aksai Chin. As the author remarks: “Delhi had made a fool of itself by not having noticed the occupation of Aksai Chin for several years …” Krishna Menon thought something had to be done “a sort of psychological and political compensation.” Thus he launched ‘Forward Policy.” While Chinese said they did not recognise McMahon Line, for India, the McMahon Line was sacrosanct; but in the eastern sector, India moved north of it in the Thagla Ridge. Chinese wanted to enforce India’s respect to the McMahon Line as Mao was looking for an excuse. War followed; Sir Henry McMahon must never have envisaged that “hurriedly conducted survey” would trigger a war one day! India could have protected McMahon Line, in the 1950’s by taking a firm stand against Chinese violation of Tibetan independent / autonomous status. McMahon Line’s status is closely linked to Tibetan status. India could have tried to physically demarcate India-China borders based on McMahon maps. Hence, India must take much of the blame for not seeking to transfer McMahon’s “thick red line on a map” on the ground by physical demarcation soon after independence. Let India leaders declassify the entire Henderson Brooks Report on Himalayan Blunder so that nation can know the exact truth.
Posted by Claude Arpi at 6:43 AM