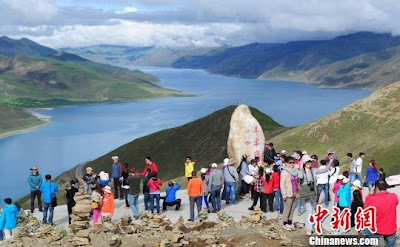 This article in the South China Morning Post raises the autonomy issue.
What means a "high degree of autonomy"?
Is it what Generalissimo Chiang Kai-Shek's enunciated in his speech to the Kuomintang Executive Yuan on August 24, 1945?
Michael C. Davis says that Beijing argues that asking for a 'high degree of autonomy' would be the equivalent of 'independence'.
It is not automatically true, there are in Europe for example, several genuine cases of 'regional autonomy' which work.
Davis has a point when he affirms: "No explanation was given why the same guarantee of a 'high degree of autonomy' for Hong Kong is not deemed independence."
The answer is perhaps that Beijing is aware that Tibet was independent in the past, and though China will never admit it, that makes Tibet different from Hong Kong.
This issue of 'autonomy' brings more questions.
The Dharamsala's Memorandum of Genuine Autonomy for the Tibetan People asks for genuine autonomy in fields such language, culture, religion, environmental protection, education, and natural resources.
I am not sure in which category 'tourism' comes, but the transformation of the Tibetan plateau into a mega museum, is certainly a subject that an 'autonomous' government would like to control.
Yesterday, the China Securities Journal reported: "Road construction in China's central and western regions will speed up following a central government vow to boost the expansion of the railway sector."
According to this source, "In Tibet, authorities will spend 200 billion yuan ($32.3 billion) to build a road network centered around the regional capital of Lhasa over the next five to eight years, as well as extend the combined length of the region's highways to over 110,000 km. The construction projects will be funded using multiple channels, including fiscal investment and corporate bonds."
Now, will this type of development comes under the Central government or an 'autonomous local government'?
The Chinese answer is clear: the Centre.
And who will decide of the quantum of Chinese tourists allowed to visit Lhasa every year (15 millions next year).
It is clear that these road development's plans have for objective to cater to these millions of Han tourists.
Can it be stopped under a 'genuine autonomy' scheme?
Once again, one can doubt that Beijing will renounce this god-send opportunity to control Tibet.
The Journal quoted earlier says: "The central government vowed last week to speed up reforms concerning investment and financing in the railway sector, including establishing a railway development fund using government investment and social capital."
And let us not forget that these roads and railway lines can also be used for military purpose, if and when required.
Hong Kong does not have all these problems.

Tibetan autonomy poses questions for Hong Kong
South China Morning Post
30 July, 2013
Michael C. Davis
Beijing's guarantees of self-rule have not proved reliable for the unhappy Himalayan region
Following the 120th Tibetan self-immolation in protest at Beijing's alleged autonomy policies, Hong Kong people - themselves the subject of autonomy guarantees - may wonder why ordinary Tibetans are so dissatisfied.
On the face of it, Beijing and the exiled Tibetan leaders should be able to find a solution. In the 1951 Seventeen-Point Agreement, sometimes considered a precursor to the Hong Kong agreement, Beijing promised Tibetans could carry on under their traditional self-rule - with Chinese sovereignty.
But the excesses of China's early communist period eventually led to the collapse of the agreement and the 1959 flight of the Dalai Lama.
China then proclaimed the system of "minority nationality autonomy". Tibet was divided into 13 autonomous areas: the Tibetan autonomous region and 12 adjoining areas in neighbouring provinces.
The problems lie in the failure to fully implement the national minority autonomy laws and the use of repressive policies to contain resistance.
To address these problems, the Dalai Lama long ago conceded claims for independence in favour of autonomy under his "middle way" approach. After the bloodshed of the 2008 protest, he was invited to elaborate on his proposal under the People's Republic of China constitution, which he did in his 2008 Memorandum of Genuine Autonomy for the Tibetan People. It urges genuine autonomy in areas including self-government, language, culture, religion, environmental protection, education, and natural resources. This largely tracks China's existing national minority commitments, but also seeks control over immigration and public security, similar to the Hong Kong model, and the uniting of all Tibetan areas.
Responding dismissively, Beijing argued that this was the equivalent of asking for a "high degree of autonomy" and that would be the equivalent of "independence". No explanation was given why the same guarantee of a "high degree of autonomy" for Hong Kong is not deemed independence. The seemingly shared commitment to autonomy in Tibet has been undermined by a lack of trust. Beijing worries that "genuine autonomy" is just the first step on the road to real independence. The Tibetan side, after their tragic experience to date, is surely doubtful about conceding any ground without iron-clad guarantees.
Beijing has also pressed the Dalai Lama to concede to its widely disputed claim to have always historically ruled Tibet. The Dalai Lama will only acknowledge an historical imperial religious relationship with China. For him, autonomy is merely the only option realistically available under difficult circumstances. Even under Chinese historical accounts, Tibet would have enjoyed genuine autonomy throughout the imperial period, when indirect rule of peripheral areas was the norm.
A careful look at the Tibetan memorandum reveals that it not only largely tracks China's own proclaimed policies, but also international standards reflected in the 2007 United Nations Declaration on the Rights of Indigenous Peoples, which aims to give indigenous peoples self-governance and cultural rights.
China voted for the declaration, but quickly proclaimed there were no indigenous peoples in China.
China's long-term interests might be better served by embracing international standards. This would require less interference in Tibet, something Beijing has also been reluctant to do in Hong Kong. Agreement with the Dalai Lama may also secure Tibetan and international support.

Professor Michael Davis, of the University of Hong Kong, is a constitutional law specialist
Posted by Claude Arpi at 7:22 AM