My article An Indian Dalai Lama appeared in Rediff.com

Tawang is very much a part of India, and if the present Dalai Lama decides one day to take rebirth in Tawang, the Indian government will openly welcome him and support him, notes Claude Arpi.

In January 1951, a few months after the invasion of Tibet and sensing a threat from China, the then Assam Governor Jairamdas Daulatram ordered a young Naga officer to march to Tawang and start adminstrating the area.
On February 9, 1951, Maj Ralengnao (Bob) Khathing, accompanied by 200 troops of 5 Assam Rifles and 600 porters, arrived in Tawang in the then Kameng Frontier Division of the North-East Frontier Agency.
A month earlier, Bob had left the foothills on his historic mission. A few days after his arrival, he selected a high-ground near the Tawang Monastery for meeting the Dzongpens, the Commissioners from Tsona in Tibet and the village elders. Bob walked to the place, while 100 riflemen encircled the ground. The Assistant Political officer (this was Khathing’s designation) instructed his second in-command to ‘fix bayonet’: “One hundred click sounds of bayonets coming in unison seemed to say, we are even ready for blood,” wrote his biographer; then Bob spoke to the people about the Indian nation.
Thereafter, everything went smoothly. In fact the Monpas were delighted by Khathing’s arrival.
On February 14, 70 years after the momentous event, several dignitaries celebrated this ‘true hero of independent India’ and Arunachal Pradesh Governor Brig (Retd.) BD Mishra laid the foundation stone of a memorial for him at Tawang. 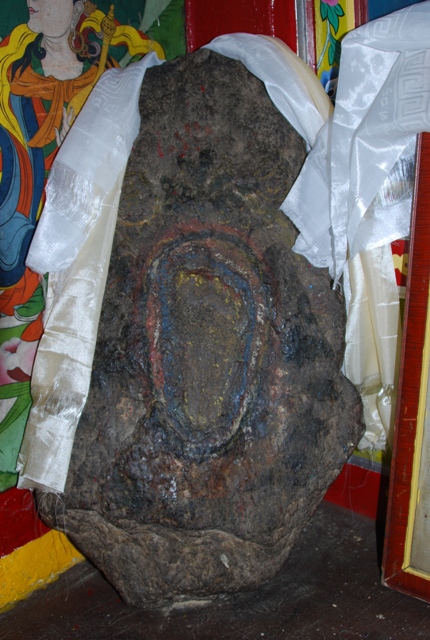 The Master of Poetry
Another hero of Monyul, the land of Monpas, located south of the McMahon Line is Tsangyang Gyalsto, the Sixth Dalai Lama who is hardly known in India today.
The cuckoo bird from the land of Mon brings rain,
It descends from the sky
It brings blessings to the earth.
Life grows and blossoms.
When the cuckoo bird comes from Mon
My lover and I join as one
In body, heart and mind.
It may seem incredible, but this song was written by a Dalai Lama. Tsangyang Gyaltso (the Precious Ocean of Pure Melody), the Sixth Dalai Lama born in 1643 in Urgyeling village, South of Tawang.
Near the hamlet’s temple (where Tsangyang took birth), there is a tall and magnificent tree. Many legends revolve around this sandalwood tree: it is said that it was planted by Tsangyang Gyaltso before being taken away to his destiny in Lhasa. The youngster made a prophesy saying that when the 3 main branches would become equal, he would come back to Tawang. The local priest said that the 3 branches reached the same size in 1959, a few months before the Dalai Lama, fleeing Tibet to take refuge in India, passed through Tawang and ‘visited again’ Urgyeling.
When the delegation searching for the reincarnation of the Fifth Dalai Lama reached Urgyeling, the Regent Desi Sangyay Gyaltso, fearing that intrigues would start as soon as the news of his passing away would be known, had still not revealed that the Lama-King was no more. He was also very keen to finish the task assigned to him by the Fifth Dalai Lama: to complete the Potala Palace in Lhasa. A series of divination and special pujas had given the Regent the certitude that the reincarnation of the deceased Dalai Lama was born in Monyul.
Tsewang Lhamo, the mother of the future Dalai Lama once asked her son to get a piece of wood and fix it in the soil to tie a cow. Instead of planting the stick in the soil, the young Tsangyang made a hole with his finger in a big stone and stuck the stick inside it. It is one of the many miracles he is said to have performed. The stone is still on the altar of his maternal house near Tawang.
Tsangyang Gyaltso was in many ways an exceptional Dalai Lama. At a young age, he was taken away to Tsona, the main monastery on the other side of the border, where he was kept for several years under the tight surveillance of the local Governors (his real identity had not been revealed to anybody). He was already an adolescent when he finally left for Nagartse near Lhasa where his Guru, the Second Panchen Lama enthroned him as the Sixth Dalai Lama.
He consistently refused to take the monk vows from his Guru and preferred a pleasure of life, visiting at night the taverns in the village of Shol below his Potala Palace and writing love songs to his beloved girl friend: “In my Palace, the place of Heaven on Earth, they call me Rigzin Tsangyang Gyaltso, But below , in the village of Shol, they call me Dangzang Wangpo, the profligate, for my lovers are many.”
His exquisite poetry is still known to all Tibetans and Monpas and sung during long evenings around a fire after a few cups of chang.
Academicians will fight to decide if he was a great Tantric master or only an ordinary man, whether his poetry contains an esoteric teaching written in a secret language or are only the verses of a libertine. He may have been both at the same time; Tsangyang may have come a couple of centuries too early to be really understood. He loved freedom and could not bear the prison that seems to have been life in the Potala, he was suffocating in the darks rooms housing thousands of gods and wrathful demons. He preferred the company of his friends. How could he have not felt oppressed in the midst of the power struggles and intrigues between aristocrats in Tibetan government in Lhasa, the Mongol chieftains and the Emperor of China? Was he remembering the days when as a kid in Urgyeling he used to escape to roam around the barley fields and the rhododendron bushes?
But his legend continued after his presumed death. The ‘Secret Biography’ of his ‘hidden life’ (written by Michael Aris, husband of Aung San Suu Kyi) tells us that he escaped the Mongols who had deposed him andwanted to kill him, he secretly left for Eastern Tibet and Inner Mongolia where he first became a wandering monk and then settled in Alashan which is today in Inner Mongolia. He passed away in 1746, forty years after his official death. He built a large number of monasteries and had thousands of disciples. Only very few knew who he really was.
His last poem before his presumed death is known by all; it announced his return as the Seventh Dalai Lama: “Oh White Crane! Lend me your wings, I shall not fly far, From Lithang, I shall return.”
Two years later a young boy Kalsang Gyaltso was born in Lithang (Eastern Tibet) who would soon be recognised as the Seventh Dalai Lama.
Earlier this month, China Tibet Online announced that from December 12 to 13, 2020, the Tsangyang Gyatso Cultural Research Association held its second meeting; this Chinese organization is said to be “engaged in cultural research of Tsangyang Gyatso and is approved by the People’s Government of the Tibet Autonomous Region”, according to the Communist website, which adds: “The association is composed of well-known Tibetan scholars in China and of experts and scholars from various ethnic groups as well as from businesses and industries who all love Tsangyang Gyatso culture.”

It is ironical, that the Sixth Dalai Lama is ‘studied’ and eulogized in Communist China, while the present one is demonized. But Tsangyang Gyaltso does not belong to China; he is truly a part of Tibet and Monyul (Tawang) heritage.
However in terms of propaganda, China is indeed always far in advance on India.
Already in 2014, the residence of Tsangyang Gyatso when he stayed in Tsona (Tibet) on his way from Tawang to Lhasa “has been approved to be the Tibet's historical and cultural site under government protection”, observed chinanews.com.
To acknowledge Maj Khathing was a great move by the Government of Arunachal and the Indian Army, but why can’t Tsangyang Gyaltso also be acknowledged as an Indian Dalai Lama and a cultural centre or museum opened in Urgyeling or Tawang. The importance of the Dalai Lamas in Himalayan culture needs to be emphasised; a Poetry Festival, on the model of the Jaipur Literary Festival could also be organized on a yearly basis in Tawang and poets from all over of the world invited to visit this charming part of India.
Why leave the initiative always to China, who still dares to claim Tawang as Southern Tibet?
Tawang is very much a part of India, and if the present Dalai Lama decides one day to take rebirth in Tawang, the Indian government will openly welcome him and support him.