What went unsaid between Modi and Xi 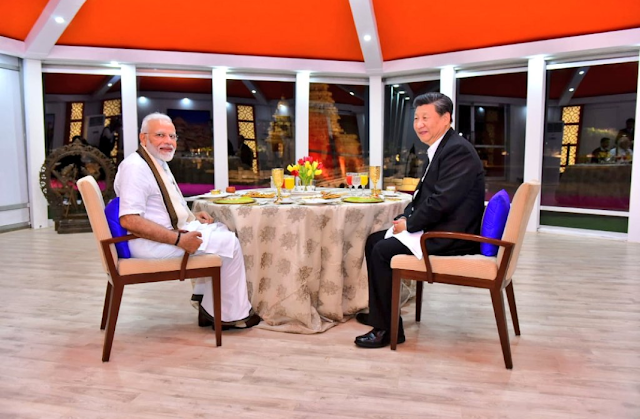 Everything that happened at Mamallapuram remains 'informal', including the decisions taken (if any).

When nations start speaking about their past, it is often because they prefer to avoid talking about the present. It could be the case with India and China in Mamallapuram, where Prime Minister Narendra Modi and Chinese President Xi Jinping "in a friendly and relaxed atmosphere, held a candid and in-depth exchange of views on bilateral relations and major international and regional issues of common concern," according to Xinhua News Agency.

Nothing contentious
Incidentally, a Chinese report speaks of a 'relatively' relaxed atmosphere only. "Maintaining and developing good relations between the two countries is China's unwavering policy. Under the current international circumstances, the two countries shoulder increasingly important responsibilities in safeguarding global stability and promoting development," observed President Xi. This was probably an indirect jibe at the US President.
Interestingly, Xi spoke of 'national rejuvenation' for India and China, a term usually linked to the 'Chinese dream' to see the Middle Kingdom become the most powerful nation in the world. After the cultural tour given by PM Modi on the first day, China has perhaps realised that India too has a glorious past. Can the age-old "commercial linkages and people-to-people contacts in the past two millennia," solve the current contentious issues? Probably not; though it may help relax the atmosphere vitiated by the Pakistan Prime Minister's visit to China a few days earlier.
The Indian communiqué from the PMO said that the two leaders "evaluated the direction of bilateral relations in a positive light and discussed how India-China... interaction can be deepened to reflect the growing role of both countries on the global stage."
'XiMo', as observers termed the two leaders, agreed that the international situation is witnessing significant readjustment: "India and China share the common objective of working for a peaceful, secure and prosperous world in which all countries can pursue their development within a rules-based international order." Whether China always follows a 'rules-based' order in the South China Sea, trade or cyberspace is another issue.
The alphabets T, X, HK or even K or L (Tibet, Xinjiang, Hong Kong, Kashmir, Ladakh) were apparently not on the table, though scores of Tibetans were 'preventively' arrested outside, as they planned to protest against the way China treats their countrymen.

Bilateral ties
The problem with 'unofficial' meets is that the talks are not minuted (hopefully they are recorded), no joint statement is issued, no joint press conference held and no memorandum of understanding signed. Everything remains 'informal', including the decisions taken (if any). The parties are not really bound by their words. This is the drawback.
The advantage is that things which could normally not be said during a state visit can be frankly stated, though without an official trace. How will historians be able to reconstitute the 'Chennai Connect' as the meet was termed, in 30 years? President Xi made some proposals, according to Xinhua. First, "China and India should be good neighbours who live in harmony and work together as good partners;" for him, the dragon and the elephant dancing together is "the only correct choice for the two countries". Then the two countries should "correctly view their differences, and never let the differences dim the overall situation of bilateral cooperation". China and India need to have a timely and effective strategic communication, enhance mutual understanding and cooperation. Xi also proposed that the two countries should improve their cultural and people-to-people exchanges and finally both nations should strengthen cooperation in international and regional affairs.
But while Xi speaks of the international system "with the United Nations as its core", Beijing still opposes India's entry in the UN Security Council. At the end, it was said, "The relevant departments of both sides [should] implement the results of the meeting so as to open up new prospects of China-India cooperation."

Delicate balance
Of course, both sides agreed that terrorism continues to pose a common threat to humanity, but this at a time the Chinese press praised Pakistan Army Chief General Qamar Javed Bajwa, whose only objective in life is to 'retake' Kashmir from India.
One positive outcome is the decision to establish a high-level economic and trade dialogue mechanism "with the objective of achieving enhanced trade and commercial relations, as well as to better balance the trade between the two countries". This could hopefully help rebalance the trade deficit, today in India's disfavour; a manufacturing partnership was even suggested.
Regarding the border dispute, both parties reiterated that efforts should be made to arrive at a mutually agreed framework for a fair, reasonable and mutually acceptable settlement; nothing new. However, the Indian communiqué speaks of the Political Parameters and Guiding Principles agreed by the two counties in 2005 and later rejected by China. Article VII stated that in reaching a boundary settlement, the two sides shall safeguard due interests of their settled populations in the border areas, which meant that areas like Tawang would no longer be claimed by China. Did Xi really agree to that?
The future only will tell us.