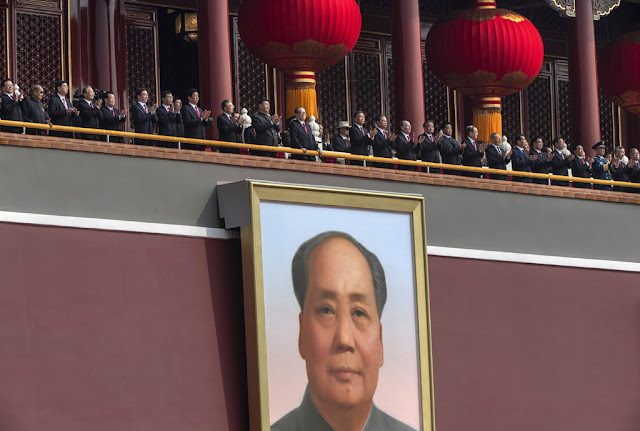 “Observe calmly; secure our position; cope with affairs calmly; hide our capacities and bide our time; be good at maintaining a low profile; and never claim leadership,” such were the words of Deng Xiaoping, China’s Supreme Leader at the end of the 1970s.

Mao back in Vogue
Today’s People’s Leader, as President Xi Jinping calls himself, does not believe in these virtues; he thinks that ‘in the new era’, it is necessary to show the Middle Kingdom’s muscles …and more.
On the occasion of the 70th National Day of the People’s Republic of China, Xi returned to the ‘power coming from the barrel of the gun’ theory of his predecessor, Mao Zedong.
“No force can ever undermine China's status, or stop the Chinese people and nation from marching forward,” solemnly declared President Xi Jinping from the rostrum of Tiananmen Square.
Xi reminded the privileged who attended the function that “seventy years ago, Comrade Mao Zedong solemnly declared to the world that the PRC was founded and the Chinese people had stood up. This great event completely reversed China's miserable fate born from poverty and weakness and being bullied and humiliated over more than 100 years since the advent of modern times."
The Chinese State media was ecstatic as “China had reaffirmed its commitment to global peace and development”, and added: “we will continue to work with people from all countries to push for jointly building a community with a shared future for humanity.”
Neighbours, Japan, Korea and even India do not see it that way.
They witnessed 23 new weapons displayed, some of them seeming uncontrollable by the missile defence installed by Japan, South Korea or even the US.
Many watched in awe the DF-17 hypersonic ballistic missile (a hypersonic glide vehicle that can deliver both nuclear and conventional payloads) or the new-generation road-mobile DF-41, which made their debut in an official parade. Though one analyst said that it was “the ultimate show of insecurity and cold war thinking”, The South China Morning Post (SCMP) wrote: “For China it is a show of how its armed forces have been modernised.” The Hong Kong newspaper further pointed out: “Among them, the Dongfeng, or ‘East Wind’, series of missile systems drew the most attention,” it included not only the DF-17 and the DF-41, but also the DF-16 and DF-26 medium-range missiles.
Some 15,000 troops from 59 units, 47 belonging to the ground forces and a dozen airborne squadrons, participated in the display. Xi inspected 580 new weapon systems, almost all of them were ‘made in China’, proving that Beijing’s military industry is truly becoming self-sufficient. It is a lesson that India has hopefully noted a few days before the visit of the Chinese President in Mamalapuram.
Interestingly, the Jane’s Review mentioned that the parade showcased “a number of new land platforms that reflect growing needs within the People’s Liberation Army Ground Force (PLAGF) for improved mountain warfare capabilities;” the reputed publication noted that the show comes two years after Doklam: “Analysis conducted by Jane’s indicates that the PLA has since attempted to revise its military positions in the region to improve its readiness, while India has maintained a robust presence,”
further observing that China has built a number of all-weather roads through Tibet “but its primary armour assets capable of influencing the totality of the battlefield, such as the Type 99A2 and Type 96 main battle tanks, are too heavy to deploy and sustain in mountainous regions.”

Firepower in Show
A similar restriction applies to the PLA’s heavy artillery platforms, said Jane’s “this situation points to the need for lighter armoured vehicles that can provide direct and indirect fire support to PLAGF units operating in mountainous regions.”
ZTQ-15 lightweight tanks and the PLC-181 SPH vehicle-mounted howitzer, were paraded on Tiananmen Square: “The weight of those vehicles, which is not thought to exceed 35 tonnes for the ZTQ-15, means that these vehicles can be rapidly relocated using air or rail assets, if required.”
The ZTQ-105, a 105 mm gun and a 155 mm L52 gun for the PLC-181, have already been spotted in Tibet, they are “sufficient to counter all vehicles and forces that the Indian Army can currently deploy to the disputed territories at short notice.”
Incidentally, the PLA’s five theatre commanders appeared for the first time at the parade. General Zhao Zongqi, Western Theatre Command who looks after the Chinese forces facing India was present.

Notes for PM Modi
China is clearly getting ready in case of another showdown with India.
Something else is not auguring well for the Mamalapuram meet: Pakistani Prime Minister Imran Khan will visit Beijing a few days before Xi arrives in South India, to brief the Chinese President about Kashmir and deliver a speech at the China-Pakistan business forum to try to ‘revive’ the stalled China-Pakistan Economic Corridor (CPEC) projects.
In the meantime in Nepal the security in Kathmandu has greatly increased, partly to control the Tibetan refugees during the grand show on Tiananmen, but also in view of Xi’s probable visit later this month. 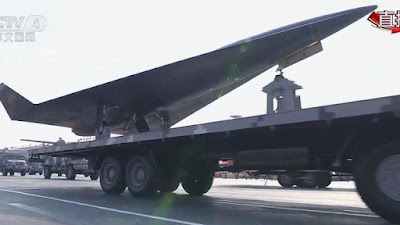 In these circumstances, one shouldn’t expect too much from the ‘informal’ Modi-Xi talks. The status of Gilgit-Baltistan will no doubt be at the center of the dialogue; it has implications for the border issue, the Shaksgam Valley ‘offered’ by Pakistan to China in 1963 and today occupied by China, entirely depends on the future status of the area.
Opening a couple of more Border Personnel Meeting (BPMs) in the Himalaya and possibly, a new landport between India and Tibet, could be positive advances.
Prime Minister Modi should not to be influenced by the show of might displayed on the Tiananmen Square, but should take a leaf from Deng’s moto, ‘observe calmly, bide your time…’.
It will be wiser for India than to show its muscles.
Posted by Claude Arpi at 2:07 PM