After Doklam, how China is opening a new front on the Himalayan border India needs to act fast 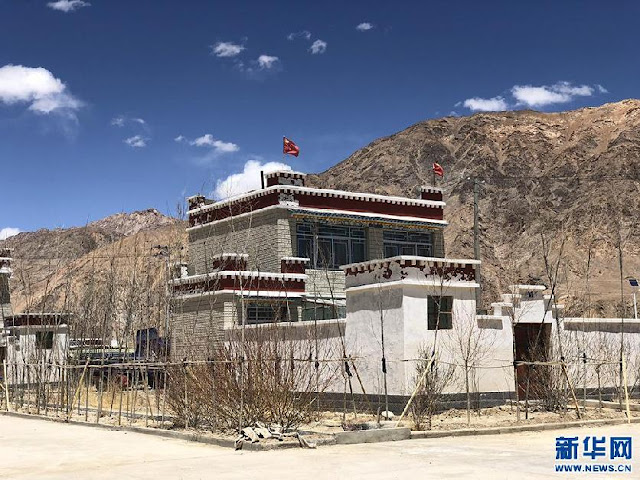 My article After Doklam, how China is opening a new front on the Himalayan border
India needs to act fast, appeared in Mail Today/DailyO.

In recent months, the Sino-Indian relations have seemingly witnessed a thaw, especially after the visit of General Wei Fenghe, the Chinese defence minister, to Delhi and a few days earlier, the Eastern Army Commander Lt Gen Abhay Krishna’s trip to China.
One can only be glad about the newly cordial atmosphere which follows the tense moments during the Doklam episode in June-August 2017. However, this does not mean that China is not preparing to open new fronts on the 4057km-long Himalayan border.
In fact, Western Tibet (known as Ngari by the Tibetans) has lately seen rapid development, particularly of its infrastructure. As often on the Tibetan plateau, it starts with tourism.

New ‘model’ villages
Last week, China Tibet Online reported that during the first eight months of 2018, nearly six lakh tourists visited Ngari and the revenue generated reached $106 million; a 30 per cent increase compared to last year.
The website noted: “With the completion of the paved National Highway 219, the building of Ngari Kunsha Airport, as well as improvements to tourist services in Ngari Prefecture, more and more tourists have chosen to visit Ngari in recent years.”
Incidentally, Highway 219 is the Aksai Chin Road. The Himalayan range, the source of the Yarlung Tsangpo, the Indus and the Ganges, without forgetting Mt Kailash and Lake Manasarovar, are promoted as “the ancestor of ten thousand mountains and the source of a hundred rivers”.
During the last few years, Beijing concentrated on the development of the southeastern prefectures of Nyingchi and Lhoka, north of Arunachal Pradesh.
This translated in the mushrooming of new ‘model’ villages on the Tibetan side of the Indian border. This development was officially linked to ‘poverty alleviation’ and the ‘defence of the borders’. The local populations are supposed to be the ‘Guardians of the Sacred Land and Builders of Happy Homes’.
Several senior Communist leaders visited these new villages, either north of Kibithu (where a Memorial for the 1962 War has been built as a bonus); in Metok, north of Upper Siang district; in Yume, north of Takshing in Upper Subansari or in Lepo, Marmang and Tsona, north of Tawang. On July 25, even Li Keqian, the Chinese Premier, visited a village in Mainling County, north of West Siang district.
A telling sign of the new move is the amount of archaeological excavations undertaken; as a colonial power, China needs to establish its bona fide in the region.
The idea is to prove that Tibet was always part of the Belt & Road Initiative. Quoting Huo Wei, head of the School of History and Culture of the Sichuan University, Xinhua wrote: “The discoveries showed that there was a long stage of civilisation in the Peyang Tunggar region, and the civilisation had close ties with the surrounding areas. Before Buddhism was introduced to Tibet in the seventh century, there was a period called Shangshung culture according to historical recordings.”
In July, The Global Times affirmed that the excavation in Western Tibet “will help archaeologists understand Tibetan cultural development.”

Banking on history
Though hardly mentioned in these articles, a similar civilisation flourished in the Indian side of the Himalayas, in areas such as Spiti, Kinnaur or Ladakh which have been deeply connected (religiously, economically and also politically) with Western Tibet. But today the border with India is sealed!
For Beijing today, the first step to develop the area into a tourist spot is to provide a solid historical (meaning ideological) background.
The 4th Annual China Tibet Cultural Tourism International Expo is taking place from September 7 to 11 in Lhasa: “the investment-attraction platform at the expo will not only improve Tibet’s cultural soft power, it will… (help promoting) business collaborations in Tibet and boost the local economy.”

Importance for India
The official news agency added: “The Ngari area, located in western Tibet, has an average altitude of 4,500 metres,” the Chinese propaganda usually centres on the Kailash: “a huge pyramid of strange black rock sticks up, head and shoulders above the other mountains surrounding it. Shaped like a 6,000-metre pyramid, this unique mountain is Mount Kailash, known around the world as the most sacred mountain in history. Dominating the region, both physically and spiritually, this surreal mountain holds sway over more than one billion people around the world,” says the Atheist State.
Beijing has started duplicating in Ngari what has been done in Nyingchi and Lhoka areas; first and foremost, improving the infrastructure of the border villages. Among the three new airports to be constructed in Tibet, Purang is located in Ngari prefecture. The construction should begin in 2019 and it will be functional in 2021.
The objective of these airports is to strengthen the border's communications with surrounding areas. Let us not forget that airports and highways on the plateau legally have dual-use (civilian and military).
Several roads branching from the Highway 219 are being constructed to the border with India. The project ‘Guardians of the Sacred Land and Builders of Happy Homes’ is therefore not innocent.
India needs to act accordingly and develop its borders.
Posted by Claude Arpi at 7:14 AM