Did the Young Horse tame the Dragon? 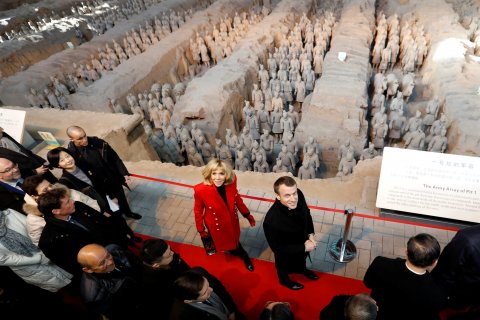 Chinese are known for their incapacity to pronounce foreign names; however Beijing tried to turn this to its advantage when the French President recently arrived on a State visit in China. In the Chinese press, Emmanuel Macron became ‘Ma Ke Long’ or the ‘Horse taming the Dragon’.
This was bound to immensely please the French President who started his three-day state visit in Xian in Shaanxi province.
Three main issues were on his agenda. First was the trade and economic cooperation with Beijing. France, like India, has a large trade deficit with China, which needed to be rebalanced.
Paris is keen to lower imports barriers for agricultural products, such as beef and wine; further it is keen on a better access to China’s markets and on fairer investment policies for the French companies operating in China.
Climate change was another issue to be discussed, though China has been a key supporter of the Paris Accord to tackle global warming. After President Trump announced that the US would withdraw from the pact, Paris and Beijing affirmed that they would form a ‘joint leadership’ to combat climate change.
Finally, Macron came to Beijing as the ‘ambassador’ of Europe. With Angela Merkel still struggling to form a government and thus temporarily out as a European spokesperson, Macron has become the main figurehead for the EU.
Before the visit, The South China Morning Post wrote: “France may step forward to take a much more prominent role. Macron will be hoping for a constructive and supportive relationship with China as France attempts to assert itself on the global stage.”
From the Chinese side, President Xi Jinping was keen to secure France’s (and Europe’s) participation in the Belt and Road Initiative (BRI).
A day before the French President arrived, AFP analyzed: “France has so far been cautious about Beijing’s plans to revive trade along ancient land and sea routes but that could change as the French president seeks to rebalance a multibillion-euro trade deficit.”
Though the ambitious initiative is to connect Europe and Asia by road, rail and sea, European nations have not so far shown much excitement for the New Silk Road.
Business was however at the heart of the visit; Macron was accompanied by some 50 French CEOs keen to work with China.
According to the French Press, the French president indeed introduced himself as the Ambassador for Europe; Le Point commented: “This state visit began ‘symbolically’ in the north of the country in Xian, ancient capital of the Chinese empire that was the starting point of the Silk Road.”
Le Parisien reported the ‘lyrical’ speech delivered by Emmanuel Macron in which he addressed the Sino-French relations, the fight against global warming and multilateralism. The French leader asserted: “The world is a fragile silk fabric.”
He spoke about "a Franco-Chinese alliance for 'the future of the world' France is changing in depth and, with it, it is Europe that is back to build a balanced cooperation with China."
Beijing must have waited for his declarations on the BRI.
In Xian, addressing an audience of academics, students and businessmen at the Daming Palace, the royal residence of the Tang dynasty for more than 220 years, Macron affirmed that China and Europe should work together on the Initiative, but it could not be a ‘one-way’ project.
He elaborated: “After all, the ancient Silk Roads were never only Chinese,” adding: "By definition, these roads can only be shared. If they are roads, they cannot be one-way. They cannot be the roads of a new hegemony that will put the countries that they traverse in a vassal state. …Multilateralism means balanced cooperation,” Macron affirmed.
This may have not pleased his hosts. 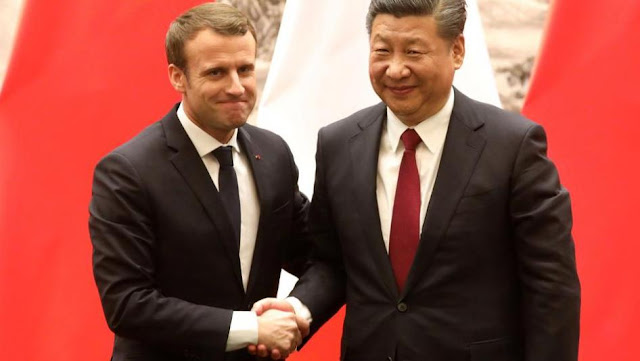 About the EU-Chinese relations, after acknowledging there had been mistrust and ‘legitimate questions’ about China, as well as fears among Europeans, Macron hoped for a new start, based on ‘balanced rules’.
He was probably referring to the issue brought up by Hans Dietmar Schweisgut, the EU ambassador to China who said that the unity of the European Union “should be fully respected as countries from central and eastern Europe edge closer to China.”
“Responsibilities of the EU have to be fully respected,” Schweisgut asserted.
He was speaking of China-led 16+1 grouping, supposed to build ties with central and eastern European countries through investment and infrastructure deals. Since its launch in 2012, it has been extremely controversial within the EU, “amid concerns that Beijing is trying to create division by exerting its economic influence on smaller member states. Of the 16 European countries, 11 are members of the EU,” said the SCMP.
Will the Chinese leadership take into account EU’s core interests is an issue instead of trying to divide EU? This will need to be followed.
With his wife Brigitte, Macron later proceeded to Beijing where President Xi Jinping and First Lady Peng Liyuan hosted the French couple at the Diaoyutai State Guesthouse in Beijing. During their first encounter, Xi affirmed said Macron's visit, as his first visit to Asia, showed that he was “paying high attention to the China-France relationship.”
Interestingly the First Ladies, Peng Liyuan and Brigitte Macron attended the meeting. It is rather unusual.
The Chinese president restated France was the first Western power to establish diplomatic relations with the People's Republic of China in 1964: “Chairman Mao Zedong and General Charles de Gaulle made a historic decision with remarkable political foresight to forge diplomatic ties in 1964. …The decision not only changed the world pattern at that time."
Xi added: “In the new era, we should follow the spirit of being responsible for history.” He stressed that China wanted to build “a community with a shared future for mankind …France has similar views,” he said.
According to Xinhua, Macron said that “France would like to take an active part in the Belt and Road Initiative."
Xinhua quoted Xi saying that the world was facing great uncertainties and China would work closely with France on big international issues. It would also “strengthen cooperation under the framework of the belt and road.”
Macron answered that France would like to take part in China’s Belt and Road Initiative: “I came here to tell China my determination to get the Europe-China partnership into the 21st century,” but he reiterated: “I want us to define together the rules of a balanced relationship in which everyone will win. We must first decide on a frame together.”
Guess what the French President brought for his Chinese counterpart?
A horse from his elite French Republican Guard.
It does not mean that The Horse has tamed the Dragon.
One can however regret that the visit of the French President to India, scheduled in early December, was postponed. India with its affinities with France should have been the first country to receive the young dynamic French President. A missed opportunity?
Posted by Claude Arpi at 6:55 AM

I agree fully with your last sentences : « One can however regret that the visit of the French President to India, scheduled in early December, was postponed. India with its affinities with France should have been the first country to receive the young dynamic French President. A missed opportunity? »
I don’t think that it’s a missed opportunity.
Remember the partnership with the 2 countries started in 1998. In January 1964, France recognizes the People's China. For over 50 years, the relations between the two countries are at a level that is not that of India. And yet, India is an old purchaser of French military equipment etc.... Moreover, India and France have known each other for a long time (see Anquetil-Duperron). And yet, the relationship INDIA-FRANCE, is not what it should be. To quote the title of a book by Roger POL-DROIT, there is in the spheres of decision in Paris a " OUBLI DE L’INDE"Too bad.