No guest could remain in the house if the host did not want him to be there... 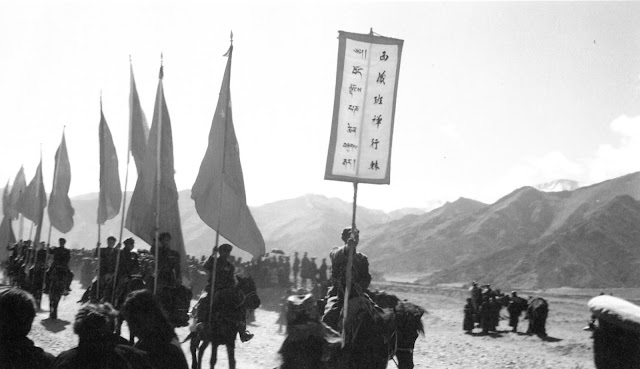 I am posting some extracts of the 'Monthly Report for the month of August 1955' prepared by Apa Pant, the Political Officer in Sikkim, Gangtok.
It corresponds to the time the Dalai Lama returned to Lhasa after months spent in China and several meetings with Mao and the Chinese Communist leaders.
The Dalai Lama said that "no guest could remain in the house if the host did not want him to be there", with the reference to the Chinese presence in Tibet.
The Dalai Lama urged the Tibetans "to work hard to make Tibet an independent progressive, peaceful, spiritual country".
All this seems very far today.

During the absence of the Dalai Lama in China the people of Tibet were in a more or less bewildered state regarding the recent political and economic developments in Tibet and were unable to make up their minds as to whether they should cooperate or disassociate themselves with these changes.
After the return of the Dalai Lama over 50,000 people came from all parts of Tibet with the intent of welcoming the Dalai Lama and offering prayers for his safe return but also desiring to present him with a petition expressing their reactions to the new economic administrative and political changes envisaged.
After many deliberations between the monk and the lay officials and the representatives of the peoples’ party, the Mimang, it was decided to request the Dalai Lama to give some sermons in which he would indicate his own advice to the people of Tibet regarding these changes.
The Dalai Lama has now given a few sermons and the general impression created in Tibet seems to be of great happiness and of even elation because of his forthright advice. Some had feared that the Dalai Lama would perhaps be won over by the Chinese and would not take any strong action.
During his sermons the Dalai Lama spoke very harshly and plainly about “past mistakes” of the Tibetan people. He also spoke openly about the corruption, nepotism, idleness and the attraction of the Tibetan officials to pursuits of leisure, luxury and near enjoyments. He urged in these sermons upon the people of Tibet to take united action for the advancement of the country and asked them to work hard to make Tibet “an independent progressive, peaceful, spiritual country”. It is reported that the Dalai Lama also in categorical terms stated that the Chinese have come to Tibet only to help the Tibetans and that they would “return back to their country” after the Tibetans were fully instructed in the arts of running a modern government. He said “no guest could remain in the house if the host did not want him to be there”.
It seems that these references to the Chinese leaving Tibet and the references to “independence of Tibet” have satisfied the people of Tibet that the Dalai Lama stands for free and progressive Tibet. The Dalai Lama is also reported to have stated that the Tibetans should not take to Chinese dress, customs or food and that they should not leave their own way of life. It remains to be seen how the scheme of the Preparatory Committee drafted in China would now be put into effect or as to whether some new machinery would be created to bring about change and progress in Tibet.
It is apparent that the Chinese are becoming more and more aware of this growing feeling for “independence and self-help” amongst the Tibetans and that they would try to accommodate themselves with this new spirit.
Simultaneously with this rising tide of nationalism the Chinese are bringing in many new developments into Tibet. Development of roads, hospitals, schools in proceeding apace. The Chinese army is also participating in various schemes of agricultural and other developments. Troops in the Chumbi valley, in Tsang and other areas, have been instructed to actively help the people in their farm work and it has been reported that in Yatung a few of the army personnel are deputed to serve water to the bazaar people!!
All these acts of cooperation and kindness are bound to have some effect upon the Tibetan mind.

Tibet Political & General
…4. Of late the number of patients taking advantage of the Indian Consulate Hospital at Lhasa is reported to be increasing. Mostly monks and Tibetan soldiers who are said to be “fanatically loyal” to the Dalai Lama seek the medical aid. Such “fanatically loyal” people who visit our Consulate General call our officials their “Dekylingka” people, i.e., “our office”.

5. Some senior Tibetan members of the Youth League are reported to have given out after a meeting of this organisation held in the Yuthok house that Tibetan should work hard to become capable of shouldering the responsibility of the administration of their country. At the same meeting the Chinese are reported to have said that they had withdrawn Chinese personnel from Inner Mongolia as the people of that country were now capable of running their own administration in an efficient way. And that it was the policy of the Government of the Chinese People’s Republic to withdraw all Chinese personnel from Tibet after imparting the necessary training etc., to the Tibetans themselves in these fields.

7. In his two day long sermon which were attended by nearly 60,000 people including monk and lay Tibetan officials, the Dalai Lama is reported to have admonished officials and monks for their lethargy and corruption. He held them responsible for bringing Tibet to the “present state of affairs”. He called on them to wake up and work in a united manner and give up all their vices. He is reported to have declared that if the Tibetan worked hard they would be able to improve their country by their own efforts. In that case the help of the Chinese people will not be necessary.

7. In the huge gathering which the Dalai Lama addressed on his return from Peking he asked the people to welcome the formation of “Rang Kyong Sishang”, i.e., the New Autonomous Status, saying that it would be beneficial to Tibet. The audience which had assembled there to welcome him home kept quiet perhaps signifying their disapproval to the proposed administrative changes.

8. [word missing] Lekhung (Deptt. of Improvement of Tibetan Affairs) was set up last year by the Chinese with representatives from all ranks of Tibetan officials and the three great monasteries. With the tactful support of the Tibetan Government the monasteries have now become very powerful in the Lekhung. There are even rumours that this has become more powerful than the Kashag itself and the Kashag refers to this body many a complicated problem like matters on which there is a difference of opinion between the Kashag and the Chinese and owing to the predominant influence of the monasteries the decision is generally against the Chinese.

9. About ten thousand arms of different kinds and large quantities of ammunition belonging to the Tibetan Govt., which has been lying in the Potala compound have now been removed to a strong room inside Potala in order to keep them safe from the Chinese.

10. The Dalai Lama is said to have very much liked the film on the Indian Republic Day celebrations in 1954 and our Prime Minister’s visit to China last year. These films were recently loaned out by our Consulate at the request of the Dalai Lama conveyed through his brother-in-law Kusung Depon Phuntso Tashi.

11. All the differences between the Tibetan Government and the Tashi Lhumpo administration are said to have been amicably settled while they were in China. Sewang Ngapho Shape acting on behalf of the Tibetan Government stood against the demand put forward by the Panchen Lama of an independent province of Tsang. It is reported that both Mao Tse-Tung [Zedong] and Chu-The [Marshal Zhu De] were also not in favour of Tsang becoming a separate independent province. This incident has increased the prestige of Ngapho Shape.

…13. Chinese are reported to have presented the Dalai Lama with six cars built on the jeep model in Russia. These cars are garaged in Norbu Lingka. The drivers for these cars are reported to be Chinese and paid by Chinese Government.
14. 26 boys and girls from Chumbi valley and 26 from Shigatse on their way for schooling to Chengtu [Chengdu, Sichuan] in China halted for a few days in Lhasa where they were put up in houses belonging to Tibetans. These boys and girls had to do their own cooking. These children although at present still wearing their own Tibetan dresses will have to discard these after Chamdo and wear the Chinese school uniforms. It is reported that while schooling at Chengtu they would be provided with free board and lodging and 10 silver dollars as pocket money per month.

…18. The general mass of people in Tibet are reported to be very skeptical about the results of the new administrative reforms. They feel that the members of the Preparatory Committee should either be nominated by the Dalai Lama or elected instead of its present proposed composition of 75% nominated by the Chinese and the rest being representatives of various religious institutions. These representatives will not be able to make their voice felt as they would always in a very small minority.

19. It is said that after the return from China most servants of Tibetan officials who had accompanied them to China have a completely different outlook. They no longer believe in utter submissiveness to their masters. The reaction of their masters (Tibetan officials) is reported to be that they just “ignore” this altitude of their servants.

21. Seven packages said to be containing ammunition which were being transported from India to Bhutan were seized by the Chinese at Tinchengang, a village four miles from Yatung in the Lower Chumbi valley. There were 20 packages in all but 18 packages had been taken through earlier. The Bhutanese in charge of the loads when questioned about the contents of the packages said that they contained horse shoes. Not being satisfied with the answer the Chinese broke open one of the cases and found that they contained .12 cartridges. It is learnt that the Chinese not knowing about the effectiveness of these cartridges enquire of the village leading men whether these could kill human beings. On being told that these were generally used for killing birds etc., and not human beings the packages were allowed to pass through by the Chinese. The Bhutanese in charge of these loads however were warned that such goods were not allowed to pass through Tibet. The Bhutanese Government have told us that this was a mistake on part of one of their servants has been punished and that it will not occur again.
Posted by Claude Arpi at 9:48 AM